When I decided to do a shoot-out of Water Blocks, I had some grandiose idea of getting as many as were available to put them to the test. As part of my research, I read as many posts from the Cooling Forum as I could find on watercooling and it became apparent that the majority of people were pretty much interested in the units made by Danger Den and Swiftech. Not all, but the majority.

To add some variety to the study, I wanted to include a spiral type design. Some members, who got wind of my intention, asked me to include the CpuFX Z4 and I relented. I contacted Danger Den and Swiftech to get samples of their popular blocks, the MCW-462u and Maze2. Both were happy to help out. I contacted CpuFX Inc and got a nice email back asking for my address, which I gladly sent.

Unfortunately, that was all I ever got from CpuFX. A follow-up email got none in return. For the spiral block, I contacted DTEK Customs, the people who market the [email protected] Block (cute name) but they chose not to reply to my email. I was getting discouraged at this point, but a search turned up another “hit” for spiral blocks.

I contacted Gemini Cooling, not knowing what to expect. They were very interested in having their products included on the “Marquee” with the likes of Danger Den and Swiftech. Not wishing to have my ego bruised with more unanswered emails, I decided to run with these for my first foray into comparing Water Blocks.

A note on testing Water Blocks:

These devices are nowhere as easy or fast to test as air-cooled heatsinks. There are more variables contributing to the results of a water block test than a HSF. Isolating just the HSF from the system was relatively easy compared to isolating a water block from the rest of the system it was used in.

With HSFs, since they come with a fan, you only need to put in air at some temperature and your CPU core runs at another. Wham, Bam, thank you Ma’am.

With Water Blocks, the flow rate (pump & tubing), liquid temperature (radiator) and what the liquid is composed of (additives) all play a major role in how the block performs. They are also not necessarily supplied with the Water Block, unless you buy a kit, but then you would be testing an entire system, not just the block. For my test system, I chose to use the following:

Here’s how it all looks: 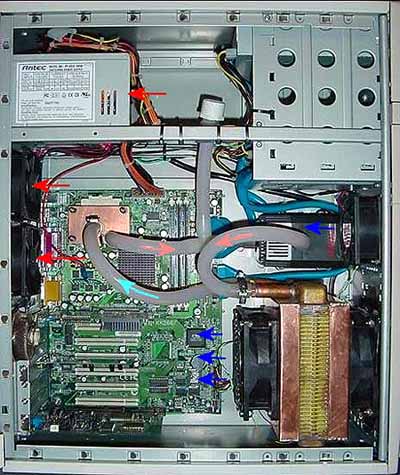 Note: The radiator fans are speed controlled by a rheostat

My setup will yield anecdotal results. That is to say, they are reproducible if you have the same setup and the same environmental conditions as me.

A pump that delivers substantially more or less flow rate will have different results – whether better or worse is hard to say. I did a simple flow test with all four water-blocks. Using the Eheim 1048 and plain tap water, I timed how long it took to fill a one-gallon jug.

In the case of the Gemini Standard block, it took ~30 +/- 1 seconds to fill the jug, or 120 gph. So, given the limitations of my test system, let’s head out to the arena:
{mospagebreak}

“Ladeez and Gentlemen. Welcome to the main event on this evening’s fight card. Hailing from Signal Hill, California, sporting a blue anodized aluminum cover with custom 3/8″ ID brass barbs, an immense copper baseplate and weighing in at a whopping 500 grams, let’s give a big welcome to MCW-462u!!!” 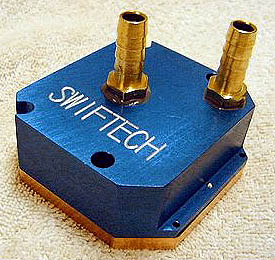 “In the opposing corner, hailing from Clatskanie, Oregon, sporting an impressive all copper design and 3/8″ ID brass barbs and weighing in at a trim 438 grams, let’s give a warm welcome to Maze2!!!” 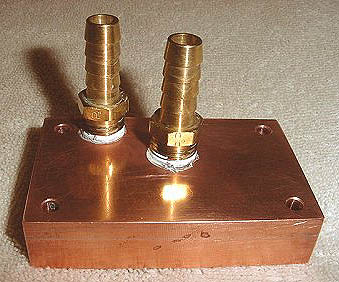 “Both fighters arrived at tonight’s weigh-in with impeccable machining and flawless finishes on their bases. Both came with all the necessary hardware for mounting to the motherboard using the 462 standard holes and neither contestant needed lapping.”

“Let’s get ready to Gurgle!”

Okay, I got that out of my system. Ol’ Hoot’s gotta stop writing articles while watching ESPN on Friday nights. Besides, this is not a two-block event.

When the spiral blocks from Gemini Cool arrived, I opened the box and unwrapped them. I thought “Oh No, Peter sent me some chipset coolers by mistake!”

Then I recognized the Socket A standard mounting holes and realized that they were indeed designed to cool a CPU. I did not expect them to be more than an “Honorable Mention”, especially the one with the ¼” channel. In corresponding with Peter, he assured me that he had done all the calculations and they were as big as was necessary to do the job.

These two weighed in at a miserly 117 grams for the Standard Model and 195 grams for the High Flow-Rate model. Both had 3/8″ ID barbs on them. The workmanship on them was what I had seen many times while working 15 years in a Mil-Spec manufacturing company and like the MCW-462u and Maze2, the baseplate finishes did not need lapping.

Peter sells not only water blocks, but also entire kits for those who do not wish to “roll their own”. He has some interesting theories about the amount of water flow needed to do the job and seems happy to discuss them in detail. Here are what they look like, but my pictures of them, after having used them, do not do them justice.

This is the Standard model with the 1/4″ channel: 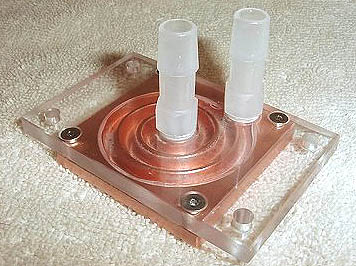 Here is the High Flow-Rate model with the 3/8″ channel: 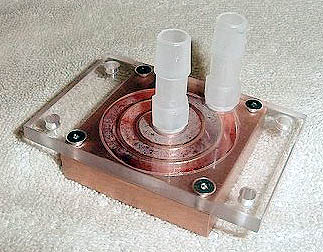 Please excuse the condensation in the channels. I photographed them as soon as I removed them from testing. Don’t be misled by the Lexan plates – they are very strong and do not bend when you tighten down the retaining screws. They are UV resistant so that people who use Black Lights inside their cases (don’t ask me why…) will not have to worry about them deteriorating.

Speaking of retaining screws, the ones that come with these blocks are very innovative. They offer the first mounting system I have seen, using the Socket A Standard holes, which do not require you to un-mount your motherboard to install. Check it out:

The standoffs have “toggles” which lock into the motherboard holes once you shove them in. They look like the kind you see with some chipset and GPU heatsinks, but these babies are much more heavy duty and don’t let go. The thumbscrews have knurled heads so you can tighten them by hand and what looks like tiny O-rings are an ingenious method to keep them from loosening up by themselves.

In all, the design of these blocks are somewhat unconventional, as is their mounting system, but the results will no doubt cause a stir in the Cooling Forum here.

Alright Already! On to the score cards!

I was as surprised by the results from the Maze2 as I was from the Gemini Spiral Blocks.

I felt there was some issue with the Maze2 mounting system, because if I pressed on some of the edges of it, the temperature would go down another degree or two. I was reluctant to increase the tension on the retaining screws any more than they already were, out of fear of crushing my CPU core or damaging the zif socket.

Despite re-mounting it three times, I continued to see the same result. In its defense, I believe it could have delivered slightly lower temperatures with more tension on the mount. I did not see this phenomena expressed in the other blocks.

What can I say about the MCW-462u? Like its air-cooled brother, the MC-462a, it is built like a tank and achieves its performance from its imposing size. This block takes up a lot of space around the CPU area. I had to remove my large Northbridge heatsink and grind away one corner for it to fit.

Of all the blocks in the test, this one left me with the feeling that it could have performed better with a higher water flow-rate.

The Gemini Cool blocks stole the show. They give testimony to the fact that a properly designed water block can give “big block” performance at modest water flow-rates and without weighing a ton. The Standard model block, with its 1/4″ channel, was the most surprising of all. BTW, if you want one of these, you can also get them from Case-Mod.com

I will try to find some more water blocks for testing as time goes on.

From all of us here at ring-side, a fond “Good Night.”

It has been a little while since Lamptron came out with a new fan controller (their FC10 was the most recent) for us to review for you, but they’re back and in a big way with the new CW611 Watercooling Controller.

SUMMARY: AMD’s design specs for heatsinks reveal one incredible challenge for heatsink manufacturers and even more of a challenge to overclockers. Those of us that have been overclocking Durons and T-Birds who come out of the Intel world are somewhat