If you can imagine someone attacking a block of aluminum with a large drill, you get what the Core looks like. No shrinking violet when it comes to size, the Core 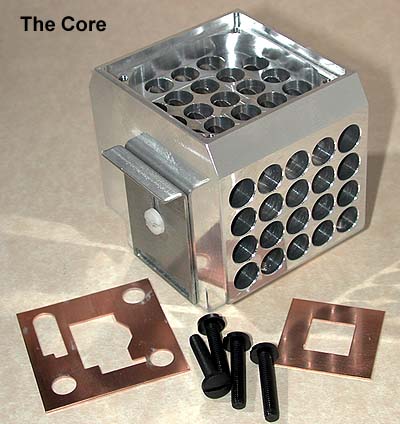 The Core ships with copper shims for stability. I did not use these in the test as it negatively impacts cooling.

is large (3″ cube), difficult to install (although now it seems it can be installed solely on the socket) and not too spiffy when it comes to cooling performance. Let’s use the “eyeball test”;

Looking at the Core, you see big holes drilled in two directions. As a result, you see a LOT of empty space. One thing about empty space – it does nothing for cooling. That’s why heatsink manufacturers try to fill the space their heatsinks occupy with as much surface area as they can. Surface area directly impacts cooling. The Core looks like, for its cubic volume, it has less surface area than a heatsink maybe half its size.

Now the Core excels at expelling air – with so much open space, the airflow through the Core is great. Unfortunately, the air isn’t contacting much aluminum, which is why it bleeds air as well as it does; sort of like putting a fan into swiss cheese.

Installation is interesting. I installed it by engaging the side clips onto the socket’s lugs. I tightened the side screws up, locking them into place. Then I turned the motherboard over and inserted four plastic screws into the base through the four holes around the socket. I snugged those up (not tight), then loosened the side straps. Then I progressively tightened the bottom screws, using a crosswise pattern, until they were snug.

A hole was bored through the base with a thermocouple epoxied above the CPU. The thermocouple is attached to an Omega HH23 Digital Thermometer. Ambient temps were measured with a thermocouple placed about 1 inch from the fan’s intake. I used Prime 95 to stress the CPU on an ABIT KT7, running a Duron 800 @ 1000 (63 watts). The Duron is actually a more severe test as its area is less than the T-Bird, so there is a higher watt loading by area. Arctic Silver grease was used in all tests.

After seeing the Delta test results, I did not use a YS Tech as its results would be worse. Calculating the Core’s surface area has to be a nightmare, but the results attest to the lack of.

Unless you’re into attaching big shiny things to your CPU for show purposes, The Core is not going to deliver serious cooling performance compared to other heatsinks on the market. If you’re going to spend about $90 for a heatsink, there are a lot better ones for the money.