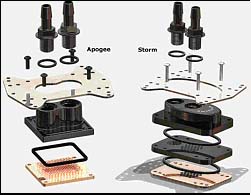 Hello and welcome to my basic overview of “The Evolution of the PC Cooling Waterblock”.

This article will cover when this water-cooling craze started, the different block designs, materials, and the machining processes used to create them. I will start off by telling you a little about myself. I have been an avid waterblock builder for 6 years now, I started building and designing my own water-cooling parts, partially because some of the price’s of manufactured parts were kind of high for my little hobby, but most of all because I personally enjoy working with my hands and derive a great satisfaction from making the parts myself, and again, saving money is always a major plus. Let’s get into a little history…

Water-cooling started in the home based computer market roughly in 1996-98, give or take a couple years. There doesn’t seem to be a whole lot of useful information available on the web from the very early years of watercooling. 1996-98 is what I could estimate as a realistic starting point by studying old articles from some of the larger websites that have been around since the beginning of watercooling, plus I’ve been doing it since 1999, so I know a little about the history of it from hands-on experience.

Back in the 90’s, most of the watercooling parts were homemade with basic hand tools featuring very simple, easy to build designs with very few parts. Watercooling was for me and many others directly tied to overclocking, in so much as the more you wanted to overclock your CPU, the more heat the CPU core would create. Aircooling wasn’t sufficient to keep up with the extra heat load without causing instability and system crashes, if it would boot up at all. Some people, myself included, also do it for the simple fact that it can be a much quieter cooling solution when you sit next to your computer while working all day – fans can really start to get on one’s nerves.

As far as the very first computer watercooling blocks created for computer cooling are concerned, I have read that it started with the commercial mainframe UNIVAC 1, which was the first of its kind delivered to the US Census Bureau, was actually watercooled way back in 1951 with chilled water and copper heat exchangers (actual water blocks made from copper plates, cross drilled like the style below) with copper tubes that ran in and out of the water blocks.

The cooling system was monitored with gauges for flow, temperature and pressure. The mainframe would not power up unless the watercooling system was running first. It had 5,200 vacuum tubes which generated large amounts of heat, and each one of them had a cooling tube on it for cooling, pictured below:

The picture below is of a water block from an actual 1980s style IBM watercooling system, used on some of their early mainframes and supercomputers: 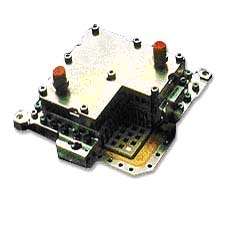 Personally, I prefer to make my own watercooling parts – they may perform a few degrees less than the latest and greatest, but they are still in the excellent range, as far as performance and keeping temperatures down. I’m sure a lot of you would agree with me. The cost of high quality waterblocks can add up very quickly.

Today’s high end waterblocks can cost up to $80 for a single CPU waterblock (and they are actually worth every penny), not to mention the single or dual videocard blocks at roughly $120 each for the NVIDIA 6800 series, chipset blocks at $30, and possibly a hardrive cooling block for another $50 dollars. The choices come down to personal preference, your budget and fabrication skills. Let’s move on to a few of the main designs used in early water block construction.

One early design (see below) entailed covering an existing aircooled heat sink with a plastic top, sealing it with silicone or epoxy and then adding two threaded hose barbs to let the water flow in and out. This first one was done really well. 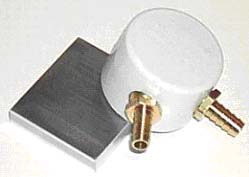 Another design entailed drilling an aluminum or copper block with a cross channel pattern. After plugging the holes that were drilled through the block, hose barbs were then added into the channels to allow water to flow thru the path of the intersecting channels and out again (See below):

A third design utilized simple copper plumbing supplies, for example one hollow 2″ pipe cap and some small lengths of 3/8″ tube. For the base plate, a piece of 1/8″ thick copper flat bar was used and soldered together as you would when doing plumbing (below):

Last but not least of some of the early water block designs brings us to one of my favorites for the home machinist and do-it-yourself types.

The “Pin Fin” water block, with a clear acrylic top to show off waterflow. It can be made on a small bench top drill press or hand held drill. With the help of a few other hand tools, such as a hacksaw, bench grinder, a Dremel, and a thread tap, you can build a really great looking block. This block still performs very well even by today’s standards and is still used quite regularly because of its low cost and ease of construction: 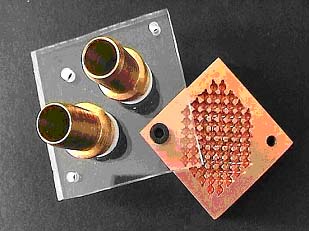 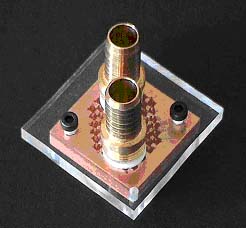 Not much changed after those four designs for a quite a few years until waterblocks were designed and created by professional manufacturers on CNC milling machines. Those designs were far advanced from the early styles. A ” Maze”, or spiral shaped channel, was machined into a small copper block approximately 1/2″ to 3/4″ thick by 2″ to 3.5″ wide by 3.5″ long. The end result was a new and fascinating water block that performed very well.

The maze and spiral blocks are out mostly of production, and although hundreds of different designs exist today, the new jet impingement type of water block, which out performs most all other blocks by 8 to 10 degrees, is now the new “king of cool”. 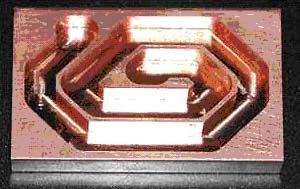 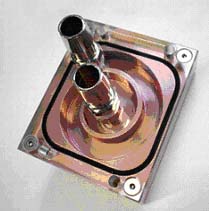 Jet impingement waterblocks feature numerous small micro jets and matching cups drilled into the base plate. It has been designed with advanced modelling techniques for jet size and the amount, base plate thickness, base plate cup hole size and shape, all which result in it being optimized for pressure and flow.

This type and its principles have been around for years, but it’s now finally been applied to CPU waterblocks. A lot of hard work, research and development went into this waterblock. It is also very expensive and somewhat difficult to create, even on the best CNC milling machines. It is readily available to the general pubic and from the test results and reviews I’ve seen, there isn’t a better block out there. 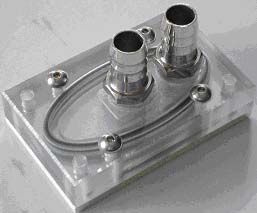 This block is made from 999% silver, which is better at transferring heat than copper but also more expensive. 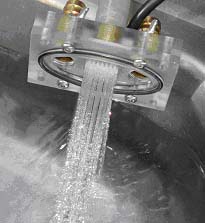 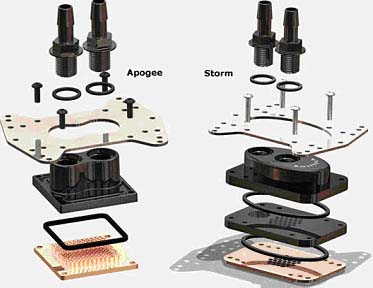 The latest and greatest of 2006 – the Swiftech “Apogee” and “Storm”.
Final Thoughts

It’s really incredible as to how far CPU waterblocks have advanced since their inception. I hope this brief summary about the ongoing changes in waterblock designs and construction has given you a look into what the future may hold for computer cooling.

Aircooled heatsinks running with high rpm fans are at a dead end with their ability to stay cool and be somewhat silent and tolerable. With AMD and INTEL processors reaching heat dissipation levels of 100 watts and above, computer cooling noise levels for consumers are rising to uncomfortable levels. I believe watercooling has a very big place in the PC industry for some time to come, if not as a main component of tomorrow’s computers.

Thank you for reading this article. 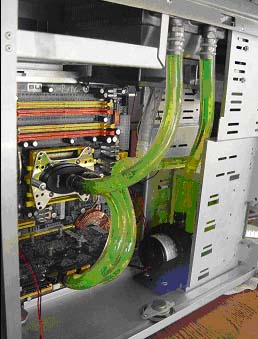 SUMMARY: Danger Den’s Socket A waterblock mounts about as securely to the motherboard as you can get – a great idea for peltier systems. The good folks at Danger Den were nice enough to send us a sample of two

SUMMARY: Similar rated Peltiers, or TECs, perform about the same. Look at the ratings but also look for potted units. However, carefully consider what to expect with high wattage CPUs – you could be very surprised! Marc-Antoine Menard was kind