NOTE: It appears that this product is no longer being manufactured or supported by Maxxxpert. 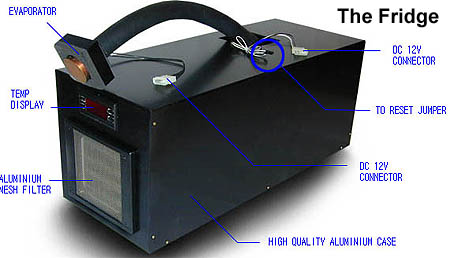 The good guys at ICEe Computers were nice enough to send a demo unit of The Fridge to check out. The unit tested was their evaluation unit which ICEe Computers used and was pretty banged up by the time I received it – the bottom of the unit was bent so that the feet on on side did not touch the floor. I think it attests to its durability.

Taking a look inside 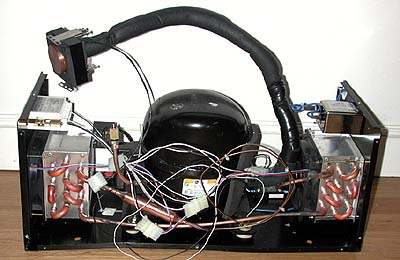 reveals why it’s called The Fridge – it’s basically the guts of a small cube in a neat little case. In the middle is the compressor and the wand is the business end – this contacts the CPU core. It’s at the tip of a somewhat bendable copper tube, so you adjust it to your particular situation.

I would guess most users will modify a case so that the it sits on The Fridge; how it’s bolted (or not) onto the case is left to the user to decide (you also have to cut a hole for the wand). In talking with Jimmy at ICEe, he told me that some users just rest a case on the base, others place the unit next to the case and lead the wand into it.

The cover is held in place by 8 metal screws – not enough to allow someone to lug a case around just bolted to the cover.

On the right side is one of the radiators; 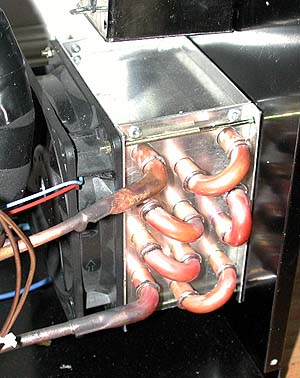 keen readers will note that this radiator is showing up in a number of watercooling kits as well – must be pretty good if it can take the pressure. The fans are 120mms. The left side 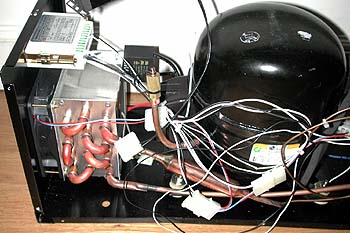 shows the second radiator and the compressor. When it goes on/off, it goes “thump”. The white box is the temp display. Taking the grill off the front 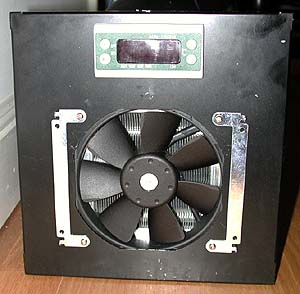 shows the 120mm fan and the temp display. The temp is of the base, not the CPU. 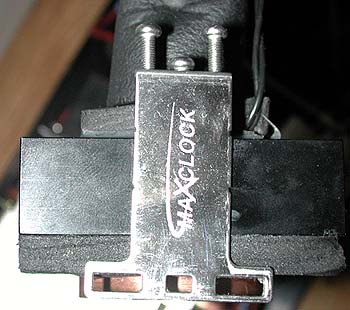 uses the center bolt to engage the socket’s lugs (there is also a P4 version). Note that the base is off center so it clears the socket cam, so make sure when you contact the core, the base is oriented correctly to the core. Notice the notches in the side: 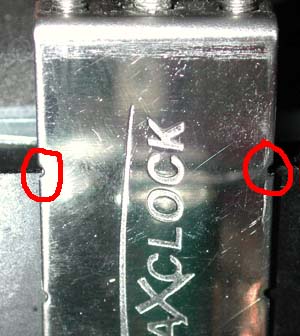 You use these to get the correct pressure on the CPU by lining up the notches against the top of the base. I found it very easy to do, although I did it on a test stand; inside a case with restricted room, it may be more difficult to set.

I decided to use the CPU Die Simulator first to check things out, with the following results:

Temps are in line with what ICEe told me they found in testing the unit on a T-Bird and P4. Without any load on the block, the Fridge temp showed about -55 C. Note the the exit air temp was 34 C; in situations where the unit might be used in a poorly vented room, ambient temps will be negatively impacted.

After having some comfort that the unit works, I then proceeded to mount it on a couple of motherboards.

Note here that I did not go to great lengths to fully prevent condensation – this is not a long term test. Make no mistake that the number one issue with below ambient cooling is condensation – not only on the CPU, but at the back of the motherboard. The Fridge comes with foam insulating gaskets; however, complete socket insulation is a must.

I did make a foam gasket, but I found that it did not compress enough and interfered with CPU contact, so I jury rigged some insulation for the test; it did not work too well, but it was OK for the test.

For the motherboard tests, I used and open stand and bent the stem into a U shape to contact the CPU. 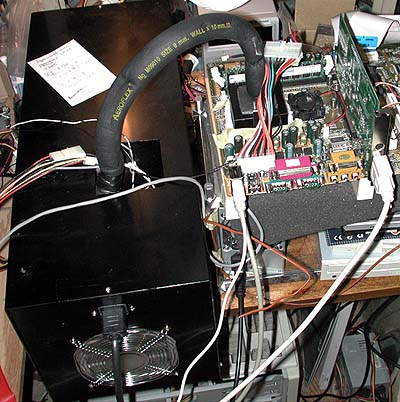 Flat, parallel contact is very important! I took my time and made sure the base of the cooling block was parallel to the core. The wand is stiff and, so don’t expect it to conform to the core just by bolting it down. Before running the unit, I unbolted it and checked the grease pattern to ensure that contact was even.

There are two 12 v plugs that must be connected to power up the unit. I used a separate power supply, as I found that it takes about 2 minutes to come to full temperature (if it’s been sitting a while).

The Fridge comes with a reset switch that can reset the PC once a user pre-set Fridge temp is achieved. For example, you could boot at up at spec, wait a couple of minutes, and when it resets, go into BIOS and set for top speed.

Not how I would do it, but it’s an option – I like the separate PS idea better. I should note that noise is very similar to a cube fridge while running plus the two 120mm fans – nothing out of the ordinary and not objectionable.

OK – all mounted and ready to go! 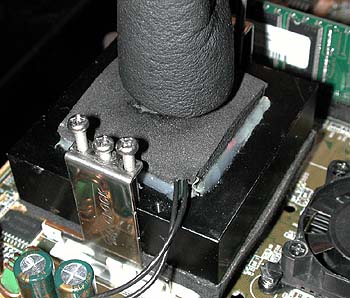 I first booted up at spec to see that everything was OK. I was going to show on-die readings from AMD’s diode, but the system I have to record on-die temps does not go below 0 C. I do have a thermocouple on the back of the Palomino I use for heatsink testing, so I recorded temps at the CPU’s back on a KK266+ as follows:

For the Shuttle, the only temp I could record was from the in-socket thermistor; note the discrepancy between thermistor and direct readings at the CPU back for the KK266+; clearly, the on-die temps were below 0 C. ICEe claims to have run P4s at over 3 GHz with The Fridge, a claim I don’t find to be outrageous given its performance.

If you’ve been thinking of doing some extreme cooling, this is certainly one effective way to go. No doubt that you can push CPUs into some very lofty territory with the unit.

Deciding whether it’s worth $450 is another matter.

On the plus side, I have used a Kryotech daily for over two years and it just keeps on going. Refrigeration is a very mature technology, and a product such as this should last quite a long time (how many basements and garages have “the old fridge”). No question the fun factor is pretty high as well.

From a noise standpoint, the overall noise level is less than an aggressive air cooled solution, but not as quiet as a water cooled unit. However, I could see The Fridge used in situations where cooling is difficult and noise a concern.

Last, whether it’s economic in the long run, considering the pace at which CPU speeds have been increasing, is a factor to consider. On strict economics I would say no, but how many of us make these decisions based on strict economics?

Thanks again to ICEe Computers for sending this our way.

How To H2Ocool Your Power Supply

I’d been sitting for a couple of weeks staring at the lower corner, right hand side of of my monitor, unable to resist watching Mother Board Monitor’s update of my system and CPU temps. Just a month before, I’d been