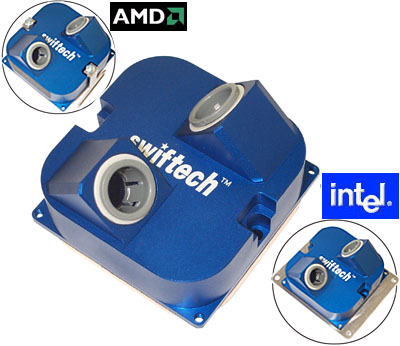 Swiftech Describes Their Design Goals for the MCW5000

The revision of the successful MCW462-U and -UH waterblocks had several clearly defined requirements:

These goals resulted in some significant changes:

To improve the MCW5000’s performance, the patent pending Diamond-Pin Matrix © copper baseplate was designed for optimal heat transfer and turbulent flow; machined from a ½ inch piece of C110 copper, each individually lapped to 3/10 of 1/1000″ and mirror polished. This baseplate is most effective with the crossflow resulting from the opposite corner angled inlets and outperforms all previously released Swiftech water-blocks!

Like all Swiftech products (that the writer has seen), one is initially struck by the impression that this is a product carefully designed and built to endure. And each product is an improvement upon its predecessor. The AMD version mounts with clips engaging the three lugs on both sides, while the P4 version has an adaptor plate which permits installing the waterblock in any orientation.

The copper baseplate is 3.5in. square and nominally 0.25in. thick, not including the integral internal pin height. The waterbox is anodized aluminum. The MCW5000 incorporates 1/2in. OD push-in connectors in the top of the waterbox eliminating any threaded joint, and the opposite corner placement ensures proper air purging in any position.

As usual, the baseplate of the Swiftech appeared flat and without imperfections. They have recently changed to a higher luster which enables using optical flats as described below.
{mospagebreak}

The MCW5000 was flow tested and from the results below it can be seen that it’s flow resistance is quite low.

The MCW5000 was then mounted under carefully controlled conditions 10 times and it’s “C/W” determined under ‘standard conditions’ (defined as 70W applied heat load, 3.8lpm coolant flow rate at 25.0°C, and 10kgf applied compressive load across the TIM joint). The following results were obtained:

The “C/W” was then determined with an applied heat load of 70W (about 100W per Radiate) under a range of flow rates from 1lpm to almost 13lpm.

Combining the head loss and “C/W” data yields the graph below which enables one to estimate the “C/W” based on the pressure drop (or head loss) across the wb. (The wb pressure drop will be only a portion of the total coolant system’s flow resistance, the flow rate being a consequence of the pump’s capability at the total system head.)

This waterblock’s “C/W” curve has a rather well defined ‘knee’, beyond which there is only a slight increase in cooling at even substantially higher flow rates.

Upon completion of the performance testing the bp surface was again inspected. There was no indication of unevenness in the pattern of the residual thermal grease upon disassembly (uniform widely dispersed very small ‘specks’, characteristic of the grease used).

It was then inspected with an optical flat in a reflex viewer using monochromatic light from a filtered mercury bulb. On a suitably reflective surface ‘fringes’ will be apparent and each one represents a height (difference) of ~0.000273mm (0.000010749in.). These are VERY small numbers and while ‘absolute’ flatness is a desirable ideal, the purpose here was to look for grosser indications of unevenness.

The image below has been manipulated to make the contrast between the fringes more visible. As can be seen it is very flat in one direction, somewhat less so in the other. Even so, there is nothing to be gained by hand lapping this wb’s bp. 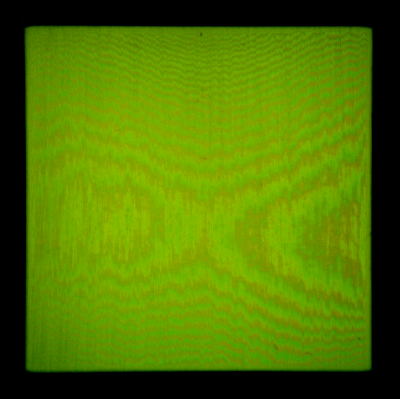 The low flow resistance of the MCW5000 ensures that it will function well with about any pump provided the other system components are not unduly restrictive. For those desiring to use 1/2″ ID tubing, plastic adaptors are available from Swiftech or can be made from short pieces of 3/8″ copper pipe (size, has 1/2″ OD) to make simple transition pieces while maintaining a large bore.

This is a high performing waterblock that is easy to install, and whose performance with TECs should be even better due to the internal flow pattern.

As is always the case with aluminum components, their corrosion resistance will depend on the quality of the anodizing, and such can only be determined with longer term testing. In any case, the use of an effective corrosion inhibitor is always recommended in WCing systems containing aluminum.

Thanks to Gabe Rouchon and Swiftech for sending
us this well performing waterblock.

Details on the testing of commercial
wbs may be found HERE.

The MCW5000 is available from The Heatsink Factory.