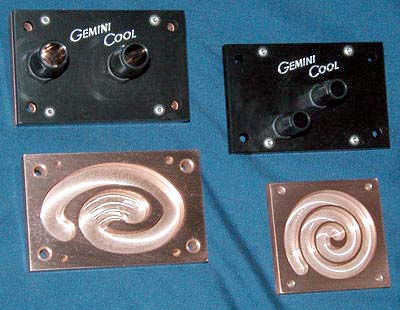 Gemini Describes Their Design Goals for the Tsunami:

There were several design goals which were set forth at the beginning of this project. We were trying to design and build a cooling system that would appeal to a wide range of computer users. As such, the design needed to provide cooling that was as good or better than some of the best air-cooling available while significantly reducing the system noise
levels. Furthermore, the design needed to be relatively easy to install and not require case modification.

Our cooling system was created to use a small pump that would run relatively
quietly. A Rio 180 (120gph) was selected to circulate the water. Knowing
that this was a ‘low flow’ type solution, our CPU cooler must be designed to
create good cooling conditions at low flow rates.

The spiral design seemed a logical choice. The spiral design would allow the water to enter the block directly above the CPU die, causing a more turbulent flow at the “hot point” of the cooling block.
The narrower channel allows for increased surface area and higher water
flow rates through the block. Both of these factors facilitate better thermal transfer.

Today’s spiral, the Tsunami CPU cooler, uses several concepts in an attempt to further optimize thermal transfer. Our current spiral ‘interferes’ slightly with the inlet barb. This interference causes a slight impingement that creates a more turbulent flow. Furthermore, there is a small dimple above the CPU die. This small dimple reduced the thickness of the copper directly above the core in an attempt to get the water ‘closer’ to the heat source.

After we introduced our spiral blocks, we began to receive customer requests for a higher flow block. At first, we had simply created a spiral block with deeper channels. Although this block was able to deliver higher flow rates, our customers really desired a block which would accept ½" fittings.

Thus we created a new ½" block and called it our Mega Tsunami CPU cooler. This new block is ½" ID tubing compatible and actually ships with black ½" polypropylene fittings. The new block has a base which is about 2x as thick as the Tsunami blocks.

We believe, in this high volume block, that the thicker base will aid people looking for more extreme cooling solutions and also larger heat source
applications. In order to boost the small die performance, the block has variable depth groves machined into a land very close to the inlet. These
groves increase surface area and bring the water close to die, for small die
applications.

Both waterblocks were provided with anodized aluminum tops with plastic
barbs, for 3/8" ID tubing for the Tsunami and 1/2" ID for the Mega
Tsunami. The Tsunami with its lighter weight and smaller tubing would seem
suited for limited space installations with a smaller pump, while the Mega
Tsunami would appeal to the more performance oriented WCer.

Fit and finish of both was excellent, with some faint scratches visible on the Mega Tsunami’s baseplate. The black anodizing was of a dark and uniform color, suggestive at least of good quality.

The Tsunamis were flow tested and from the results below, it can be seen that the Mega Tsunami will have significantly higher flow rates.

The Tsunami was then mounted, under carefully controlled conditions, 10 times and its “C/W” determined under ‘standard conditions’ (defined as 70 watts applied heat load, 3.8 lpm coolant flow rate at 25.0°C, and 10 kgf applied compressive load across the TIM joint). The following results were obtained:

The data is consistent with a normal distribution: P = 0.84, where the normal
distribution has a mean = 0.2499 and sdev = 2.5163E-03. The "C/W" distribution is shown below. ‘Standard Error’ bars are shown
to enable an estimate of the measurement uncertainty.

The Mega Tsunami was then mounted under the same conditions – 10 times and
its “C/W” determined under ‘standard conditions’ (defined as 70 watts
applied heat load, 3.8 lpm coolant flow rate at 25.0°C and 10 kgf applied
compressive load across the TIM joint). The following results were obtained:

The data is consistent with a normal distribution: P = 0.76, where the normal
distribution has a mean = 0.2537 and sdev = 2.5604E-03. The "C/W" distribution is shown below. ‘Standard Error’ bars are shown to enable an estimate of the measurement uncertainty.

The “C/W” was then determined for both waterblocks with an applied heat load of 70 watts (about 100 watts per Radiate) under a range of flow rates from 1 lpm to almost 13 lpm. It is clear that the advantage of the Mega Tsunami is at fairly high flow rates.

Combining the head loss and "C/W" data yields the graph below, which enables one to estimate the “C/W” based on the pressure drop (or head loss) across the wb. (The wb pressure drop will be only a portion of the total coolant system’s flow resistance, the flow rate being a consequence of the pump’s capability at the total system head.)

Now the superiority of the Mega Tsunami is clearly evident; at an equivalent
pressure drop (which is what determines the pump’s output) the CPU will be about 2°C cooler with the Mega Tsunami (with a 70 watts actual/100 watts per ‘Radiate’ heat load).

Upon completion of the performance testing, the bp surface was again inspected. With the Tsunami, there was an indication of ‘greater’ contact of the center area in the pattern of the residual thermal grease upon disassembly.

The baseplate was then inspected with an optical flat in a reflex viewer using monochromatic light from a filtered mercury bulb. On a suitably reflective surface, ‘fringes’ will be apparent and each one represents a height (difference) of ~0.000273 mm (0.000010749″). These are VERY small numbers and while ‘absolute’ flatness is a desirable ideal, the purpose here was to look for grosser indications of unevenness.

The image below is of the Tsunami baseplate and has been manipulated to make the contrast between the fringes more visible. The ‘high’ center can be distinguished by the circular contour lines: 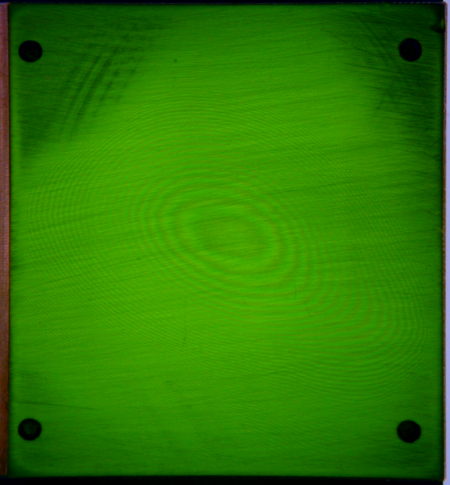 The residual thermal grease pattern of the Mega Tsunami indicated nothing unusual, but when inspected with the optical flat, the fine scratches initially observed were found to lie in a concave area covering the CPU contact patch. As this condition can be quite deleterious to performance, one might suspect that the waterblock’s performance would be slightly better were the surface a bit flatter. 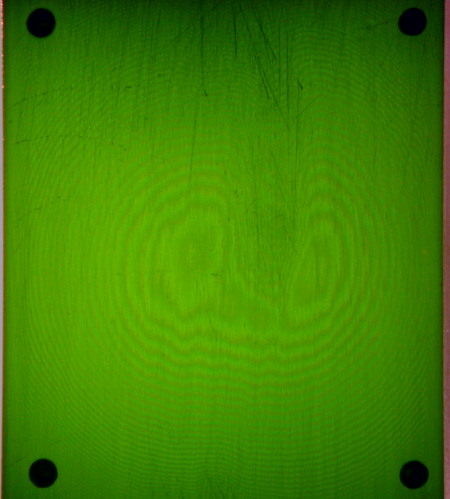 An interesting pair of waterblocks for the insight provided by their nominally similar design but different sizing. The performance of the Mega Tsunami is on a par with most other commercial waterblocks, while that of the smaller Tsunami has been somewhat compromised by its downsizing for smaller systems. While not the purpose of this testing, one might speculate about the smaller waterblock’s performance were it simply fitted with the larger connections.

These products reflect the now common application of aluminum covers on copper bases. It should be borne in mind that the corrosion protection of the aluminum is dependant on the quality of the anodizing, and that only a long term test will indicate how well that work was done. Always use corrosion inhibitors in WCing systems containing aluminum.

Thanks to Peter and Gemini Cool for sending us these waterblocks. Details on the testing of commercial wbs may be found HERE.

SUMMARY: Vantec’s latest Socket A heatsink is another credible alternative to consider. The good folks at Vantec were kind enough to forward their latest Socket A entry, the brilliantly named FCE62540D; the name alone just conjures up incredibly cool images.