Never one to let such an inconsistency go unexamined, Joe called Gabe and asked him about this. To make a long story short, Gabe got the system back and found out that the whole thing needed to be screwed more tightly to get the maximum cooling.

Strictly in the cause of scientific inquiry, I bought a “bare bones” system from Swiftnet This consists of a LiteON FS020 “Pro” Case and a complete Swiftech water-cooled dual Peliter system.

I had Gabe install my new 700E CPU on a new Asus P3B-F Bx board to see just what this baby could do.

I’ll be writing several reviews covering different aspects of this extremely competant and well-muscled system in the next week or two.

But we wanted to clear the air about just what temps one should expect from a MCW 2000.

Last night I ran Prime for 4 hours alongside [email protected], when nothing went wrong I got bored and started playing Unreal Tournament. The downside is that Prime and Seti didn’t get a whole lot done. The upside is that UT was smooth and fast. No Bang, No Crash! 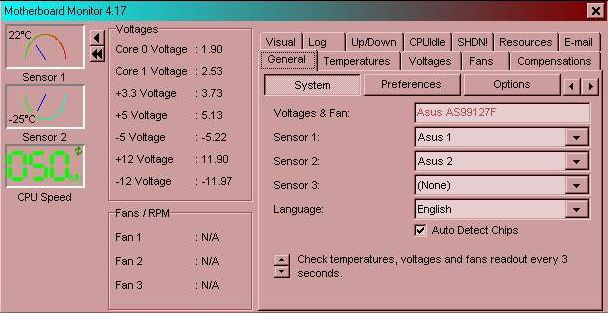 The 700 @ 1050Mhz is a cause for joy. Today I set up and ran Prime for two hours while logging temps in Motherboard Monitor. Here’s a minute by minute temperature
reading (it’s a 350Kb JPEG, and that’s just for the last half hour). Here’s a picture you can look at right away 🙂

Gabe has improved his instructions on proper installation of the CPU into the waterblock. Stlil nervous? Good, that shows your thinking”:O}

I’d been sitting for a couple of weeks staring at the lower corner, right hand side of of my monitor, unable to resist watching Mother Board Monitor’s update of my system and CPU temps.

But I live in Seattle – land of the clouds – cool springs and mild summers. My house clings to 65 F and I’ve become a sweater guy.

However, not even Seattle could keep summer away for good. As the calendar progressed, so did my temperatures. Insidiously, unrelentingly creeping slowly upwards.

I thought my water cooling system had insulated me and my machine from the seasons.

At our customary 65 F, all was well. But from 70 F, on EVERY increase in outside temperature brought a similar increase of temperature inside.

I cleaned my fans. I toyed with my water cooling recipe. I added antifreeze in greater and lesser proportions. I cut a hole in my case, added a side fan. It did no good.

Having read of the misfortunes of some quite competent and seasoned overclockers, I feared a Peltier. So I unclocked my chip somewhat, and sulked. Then I stopped sulking and found something else to fear! My temps hadn’t gone down as I had expected! That fickle goddess of Summer had rejected my Mhz sacrifice and heated up my house (and computer) some more!

Where would this end? At 82 F I found out….. at normal clock speed!

I bopped over to Gabe’s Swiftnets site. The first thing I saw was this:

I clicked on the Enlarge Picture button, and for the first time in weeks the grip of temp fever began to break.

It looked to me like an igloo in the midst of the desert. Joe had said,
“The Swiftech waterblock is the best system I have seen for water cooled peltiers; pricey, but it works well.”

But wasn’t there something else? Something else Joe had said?
Something about having trouble properly installing the chip into the water-jacket.

I called Joe up, and we decided to have Gabe install my chip.

I ended up buying the “Barebones” system. I also decided to go with his recommended Asus P3B-F BX motherboard and a new 700 cB0 chip.

Gabe handbuilds these systems; if you want the best, it takes time. But the day came when this arrived:

The professional care that went into the design and assembly of this system is impressive. Swiftech’s water-cooling assembly looks as if it were an integral part of the machine, nothing makeshift about it.

The water hoses run along the top and back of the case. The ribbon cables come “wrapped” and covered with black plastic tubing,

I learned from Gabe that I’m the first customer to receive the new “Prestolok” water hose, reservoir and radiator interconnects.

Look Ma, no clamps! One simply presses the tube in and it locks. Slide back a small ring collar and the tube slides out. No clamps or screws to tighten. Gabe is selling upgrade kits to past customers or to anyone who simply wants the best in interconnects.

I can’t really add much to Joe’s great review of the cooling system itself. So here is my system, followed by the benchmarks at 150Mhz.

MY NUMBER ONE BOX:

Yesterday, I mentioned that AMD had an analyst conference with with lots and lots of slides Today, let’s look at more of them, and see what they tell us. For The Short and Medium-Term This confirms much of what we

Yesterday, we pointed out that the lack of drivers for a new MS OS was nothing new. Is the “Stop Selling XP” order another “same old, same old?” Not quite. MS did have a “cease and desist” order to OEMs

When blistering-fast Samsung B-DIE performance and trend-setting style are not enough, Team Group goes and steps up their game by adding RGB lighting! Today we are reviewing some DDR4 memory which has already gained a strong footing in the market, just a few short months after launch. Team Group sent us their flagship RGB memory, the T-Force Xcalibur RGB. Released in 2018, this memory has disrupted the premium RGB DDR4 market by offering aggressive styling, faster speeds, and lower price points.