UPDATE: Royce sent me an email and apparently these are still available from All Electronics. Catalog numbers are CF-75 and CF-82. Thanks Royce!

SUMMARY: Great air-cooled heatsink but not available any more – I still think the Alpha PAL6035 is the best alternative I have seen so far.

Amazing how sometimes the old grab-bag box of “stuff” comes in handy. I built a slot A T-Bird, 750 MHz – 900 core, on an ASUS K7M for a friend, and he wasn’t ready for water cooling yet, so I scrounged around for a heatsink to use on the slot A. He wanted to spend as little as possible, so I tried to get something to “make do”.

Now ASUS, in their infinite wisdom, decided to place the power connector such that you really can’t put much of a cooler on it. So first task is to work around this obstacle. I pulled out a bunch of heatsinks I thought would fit, and the Global Win FOP32 (the first version) fit very nicely. So I gave it a try: I drilled and tapped four holes to mount it directly on to the CPU as shown below: 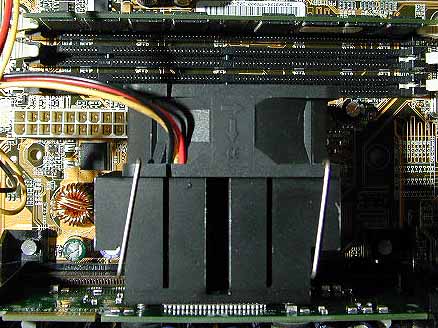 The FOP32 just clears the Power connector and does not block the RAM slot. 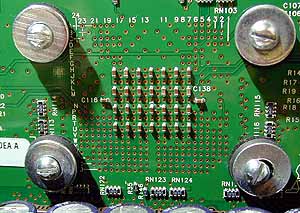 I used metal 4-40 bolts and rubber grommets to insulate the bolts from the CPU.

Back to the grab bag box: I come across the ORIGINAL HP ORB – The Cooling Store* modified it to fit on an Athlon K7 550. The holes on the CPU PCB are the same, so I checked out the fit on the K7M – no problems there. So I bolted it on as the pics below show: 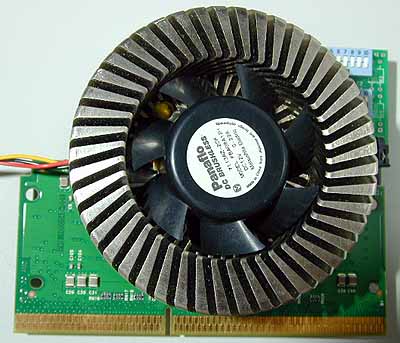 The ORB dwarfs everything else.

No interference with anything critical. 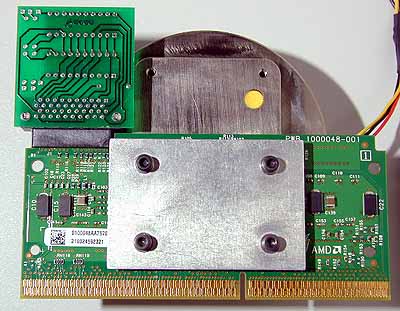 Now folks – this is impressive! Ambient is around 21C/70F, so clearly this helps a bit also.

If you don’t know the story of this heatsink, they were designed to cool CPUs that were radiating about 100 watts, so the design is perfect for AMD’s hotplates. Now, the question is, assuming you can find one, can you use it on, say, an ASUS A7V? 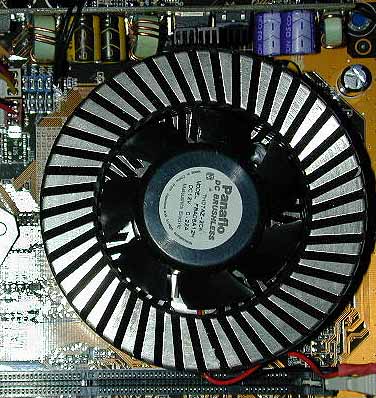 Tight but clears everything – raising it up on a copper plate will help.

YES! Fits very nicely; I also checked it on an ABIT KT7 and it can fit but very snug. What you have to do is figure out a way to mount it.

Luckily, the socket A spec includes four very nice holes around the socket for just such a purpose. So what I plan to do is get a piece of 1/8″ copper about 2″ by 2.5″, drill and tap it so it so I can bolt it on the CPU using the four holes, and then drill and tap the ORB’s base and screw it onto the copper plate.

I’m going to order a plate from Online Metals and update this when I get it working.

*I incorrectly attributed this mod to Skip – The Cooling Store came up with this. I must have been thinking of another mod; my apologies to Nevin and Clay.

I have been thinking about using a small heatsink as the basis for a water block, and finally got to putting one together for a test. The idea behind this is simple: The more surface area exposed to water, the