The best to date – Bill Adams

The White Water Waterblock From Oz Struts Its Stuff

The White Water block started as a DIY project. The design evolved out of a desire to discover if water-block design technology had reached a limit. My design goals initially were purely to discover if a block could be made, using conventional machining technology, that would outperform commercial water blocks on the market at that time (Aug ’02).

To aid in this matter, I wrote a water block thermal simulation application which enabled me to explore the pros and cons of various designs, and make changes to designs easily to see what effects resulted. Compared to modern CFD simulators, the application is a toy, but it did the job well enough.

Over time, a pattern of desired design criteria began to emerge:

I arrived at an initial design that differs not too greatly from what the White Water is today. The biggest task was getting the block made and the not inconsiderable sum of money paid to professional machinists to make it, as I had no machining experience of my own.

It was a big leap of faith. Several revisions later, and with the addition of the middle plate slot nozzle to boost water velocity striking the area directly above the CPU die, the White Water was born – a block which I felt satisfied all of the defined design criteria.

The block uses an all-copper construction to eliminate any chance of leakage due to cracking plastics. I am adamant about block sealing safety before superficial appearances. “O”-rings and liquid Teflon thread sealant are used to provide a strong seal which is still serviceable: the block may be opened and cleaned if necessary.

The block falls within the AMD and Intel heatsink weight limits. Further to the weight, the block’s center of gravity is very low and this assists in reducing the rotational torque when mounted onto vertical motherboards. The mounting springs were designed to accurately meet AMD and Intel clamping pressure specifications.

I have to thank the many individual contributors to the design process which took place almost solely at the Overclocker’s Australia Extreme Cooling forums. The contributors are numerous, all with little suggestions in things to try. In a sense the block was openly designed through the OCAU forums.

The final implementation of the design, however, represents my unique personal interpretation of how the overall design goals could be melded together into a working and affordable machined product. A special thanks must go to Bill Adams, with perhaps the defining design suggestion of:

“Think on how you can lower the thermal gradient of copper”.

The White Water is a meticulously detailed wb; the attention to small things is apparent. The three connections are decidedly different and the included Y piece may be a bit vexing on some cramped installations. A P4 adaptor plate is also available. The bp surface is hand-lapped, with a fairly high sheen and no visual unevenness.

The copper wb itself is 78 mm long by 51 mm wide; the baseplate thickness over the die was not specified. The barbs are threaded into the top plate, and the cover and nozzle plates are retained with 4 cap screws compressing “O”-rings in grooves cut into the cover and bp. The barb ID is 10.5 mm and the unit w/o the P4 adaptor weighs 401 gm dry, and 412 gm when full of coolant.

The White Water was flow tested and from the results below. it can be seen that its flow resistance is quite high:

The White Water was then mounted under carefully controlled conditions 10 times and its “C/W” determined under ‘standard conditions’ (defined as 70 watts applied heat load, 3.8 lpm coolant flow rate at 25.0°C, and 10 kgf applied compressive load across the TIM joint). The following results were obtained:

The “C/W” distribution is shown below; ‘Standard Error’ bars are shown to enable an estimate of the measurement uncertainty and a linear regression trend line to indicate ‘drift’ as the tests were performed.

The “C/W” was then determined with an applied heat load of 70 watts (about 100 watts per Radiate) under a range of flow rates from approximately 1 lpm to 10 lpm (limited by the head loss and the test pump’s capability). These “C/W”s are the lowest observed in any wb testing to date.

Combining this data yields the graph below, which enables one to estimate the “C/W” based on the pressure drop (or head loss) across the wb. (The wb pressure drop will be only a portion of the total coolant system’s flow resistance, the flow rate being a consequence of the pump’s capability at the total system head.)

Note the high pressure drop at the higher flow rates; “C/W”s much below 0.18 will not be attained with a ‘conventional’ WCing (aquarium type) pump. In any case, these “C/W”s are low, even – and also – at the lowest flow rates.

Upon completion of the performance testing, the bp surface was again inspected. After a dozen mountings there was no apparent change. There was no indication of unevenness in the pattern of the residual thermal grease upon disassembly (uniform, widely dispersed, very small ‘specks’ – characteristic of the grease used).

It was then inspected with an optical flat in a reflex viewer using monochromatic light from a filtered mercury bulb. On a suitably reflective surface, ‘fringes’ will be apparent, each one representing a height (difference) of ~0.000273mm (0.000010749in.). These are VERY small numbers and while ‘absolute’ flatness is a desirable ideal, the purpose here was to look for grosser indications of unevenness.

The image below is of the CPU contact area (faintly visible in the center) and has been manipulated to make the contrast between the fringes more visible. While difficult to make out with this compressed image, the fringes indicate two high spots, at 4 and 10 o’clock, and a ‘valley’ running parallel to the micro-channels (mini actually) on the other side of the bp. 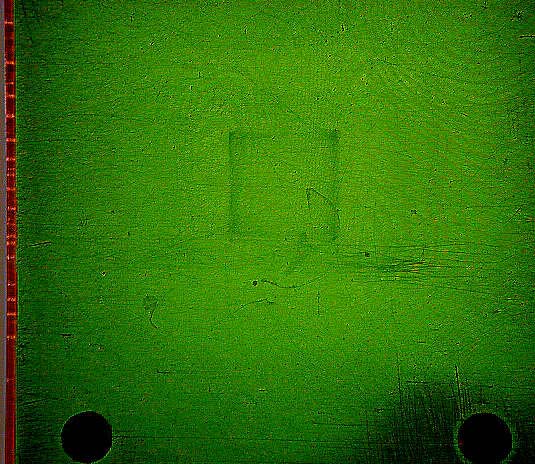 Occasionally in testing, one encounters an example that redefines the previously accepted ‘norms’; the White Water is such a wb.

Its high flow resistance is atypical of most commercial offerings – but so is its cooling. Pump selection criteria are a bit different IF one is attempting to achieve the best possible results: Select head capability in preference to volume, note that such pumps are not common – or inexpensive.

But this wb will still cool exceptionally well, even at low flow rates with typical pumps, though the pump may be operating very inefficiently. Do also optimize the rest of the WCing system for minimum losses.

The non-flatness of the bp came as a surprise, particularly in light of the wb’s impressive performance. Would even better results be had with a flat (‘flatter’ actually) bp? The change noted in other testing was often substantial, as a concave bp seems to be the worst configuration. BUT there are many imponderables – at this time it is not known what benefit, if any, might accrue.

[A Cautionary Note: Hand-Lappers beware – do NOT for an instant believe that your lapping will be superior to the wb as provided, for such is not certain; I can measure flatness, most cannot]

Thanks to Stew and LRWB for sending us this extremely well performing waterblock. Details on the testing of commercial wbs may be found HERE.

Bench vs. System Testing: The Pros and Cons