Not much difference among top brands – Joe

SUMMARY: Looks like thermal compounds are “hitting the wall” – not much difference among them. 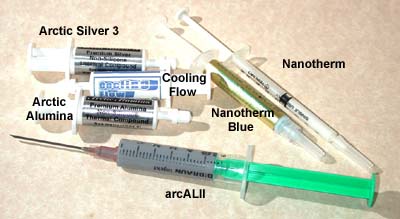 No more grease packs – lots of syringes; arcALII is REALLY a hypodermic needle!

The consumer market for thermal grease has grown from non-descript white stuff to some fairly esoteric compounds. I was fortunate to receive samples from the following companies to test out:

The newcomer to the this group is arcALII – a German company. When I received it, I was astonished to see a real hypodermic needle! I don’t even know if this is legal for distribution in the USA. Even if it is, getting the grease out was a challenge – the grease is too thick for the needle’s diameter. I finally got it out, but this packaging must be changed (I should note there is a warning in their instructions about this needle).

As to grease composition, Cooling Flow and Nanotherm are non-metallic, while both Arctic Silver (silver and aluminum) and arcALII (aluminum) contain metals.

For this test, I used an Iwill KK266+ modified to read AMD’s diode¹. I used a Palomino 1200 running at spec, cooled by a Millennium G-Lite. I recorded the following temps:

I ran Prime 95 for at least 30 minutes using each grease. After each test, I thoroughly cleaned the CPU and heatsink with xylene, a very aggressive solvent. I applied an even, thin coat for each test. After I mounted the heatsink, I pressed down and rotated it slightly to evenly distribute the grease. In addition, I grabbed a packet of non-descript white stuff that came with a heatsink to test as well.

The list below is ranked in order of Die C/W; within the same C/Ws, by alphabet.

If you were expecting a “knockout punch”, you won’t find it here. We’re looking at a difference among the tested greases of 1.1 C; among the top five, 0.6 C. This is within the range of sample error.

Of the thermal compounds tested, all are capable of delivering outstanding performance. The difference among the top 5 is not enough to declare one markedly superior to another.

There are some claims that performance changes over time. I have not done an extended time test yet. To test each grease for three days, for example, requires that I free up some test gear for an extended time, precluding other testing. I plan to do this soon – stay tuned.

Many Thanks to Directron and Crazy PC for providing grease samples to test.

¹For more on this, go HERE. If you have an SMBUS header, you can access the diode with an adapter. Drop John “Hoot” Hill an email – he makes adapters and will sell you one.

Go to page 2 for design templates. The resevoir would’ve taken too long to unbolt for the picture session; I had the camera for only 15 minutes. The interior has staggered cooling fins similar to the interior of the Danger