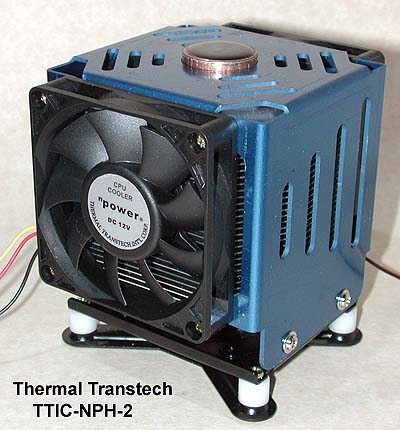 The good guys at Thermal Transtech International Corp. were nice enough to send a sample of their P4 heatpipe CPU cooler #TTIC-NPH-1 (for a good explanation of heatpipes go HERE.) This is a very large, heavy heatsink – the fans overlap the “safe area” around the socket – any component close to the socket taller than 25 mm may interfere with mounting it.

A heatpipe is basically a closed tube:

Inside is a liquid that evaporates when heated. As it travels up the tube and condenses back to a liquid, heat is released. The liquid then travels back down to the heatpipe’s base, evaporates again and the cycle repeats.

The base of the TTIC Heatpipe is fairly smooth: 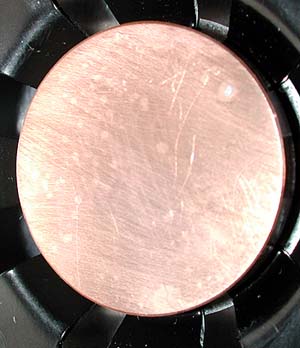 When I ran my nail over it, I could not feel or hear any ridges. Note that the base is round and does not fully cover the P4’s IHS when mounted, but only by a small amount on the extreme corners.

The TTIC Heatpipe ships with two Everflow fans #R127015DU – a 70 x 15 mm unit rated at 31.5 cfm @ 3600 rpm, 31 dBA². The fans are used in a push-pull configuration. Note that the fans spin much faster than their rating – the fans ran at 4800 +/-50 rpm. The intake fan spins faster due to decreased system resistance from the exhaust fan and the exhaust fan due to increased airflow into it.

I found them to be a bit busy – I measured noise at 62 dBA with a Radio Shack sound meter 8″ from the fan’s intake, less than a Delta 38 (about 69 dBA), but they emit a high pitched tone. The fans stand off about 5 mm from the fins, which lessens noise somewhat. It’s also safe to use a motherboard fan headers – 2.8 watts each.

Mounting requires that you remove the motherboard: 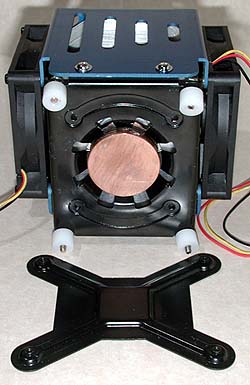 As shown above, there is a backing plate into which the base is screwed. You need a long phillips head screwdriver for this task – you unscrew/screw the base from each inside corner of the heatsink’s shroud. I found the base too close to the motherboard’s back for my comfort, so I placed a layer of tape on the back center for a “just in case”.

The TTIC Heatpipe was tested on the P4 Die Simulator which gives results that are unaffected by motherboard influences. I also tested it on an Acorp PGA478 motherboard with a modified P4 1500 to read CPU case temps.

Quick note on this mod. — Artturi.


Twin Fans for a Retail Celeron

What you need: Needle nose pliers Retail celeron heat sink Cable ties (also known a zip ties) small enough to fit through the holes of a 5 cm heat sink fan (the ones I have are 3.5 mm wide, called