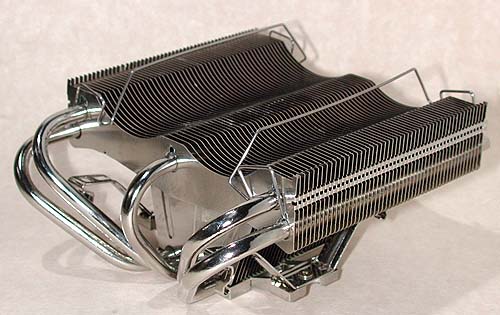 The good guys at Thermalright were nice enough to send an engineering sample of their 120mm P4 heatpipe heatsink for a test spin. This unit will be available only for P4 cooling. In contrast to some heatpipes I have tested, the heatpipes are soldered to the copper base – some used thermal paste instead, with performance suffering as a result.

This is a large heatsink – to give some idea of its footprint, the following pics show it mounted on a motherboard. Looking from the top down 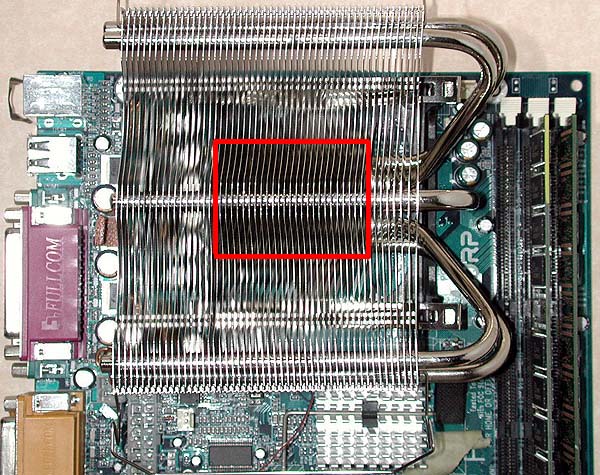 shows the overhang over the motherboard; I outlined in red the heatsink’s base. While it may look as if it interferes with the first DIMM slot, the pipes angle up to clear it. Looking edge on 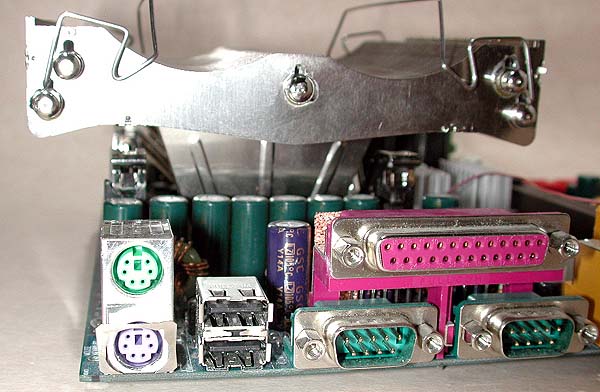 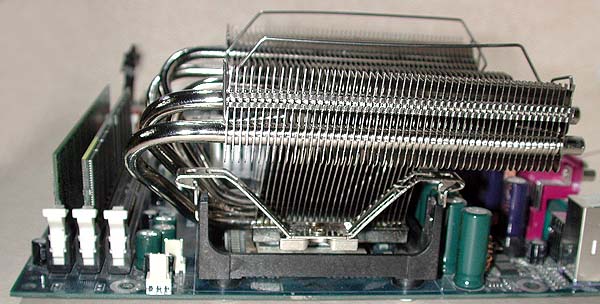 shows the fit among the motherboard’s components. Note that there will be beneficial cooling effects due to this overhang on components surrounding the socket – most notably, there may be secondary cooling of the Northbridge if passive cooling is used on it.

The Thermalright 120mm P4 Heatpipe was tested on an Acorp 4S845A motherboard with a modified P4 1500 to read CPU case temps. For testing, I used two fans – a US Toyo #USTF1203812HW 38 mm unit and a Delta 25mm #WFB1212M; unfortunately the TOYO died (I was radically overvolting it), so I can’t report noise levels on it. I varied rpms on both to give a performance range.

I thought it would be interesting to compare the 120’s performance to a similar heatpipe – Thermalright’s SP94. I tested this with an 80mm Delta fan – below is a graph comparing performance levels: 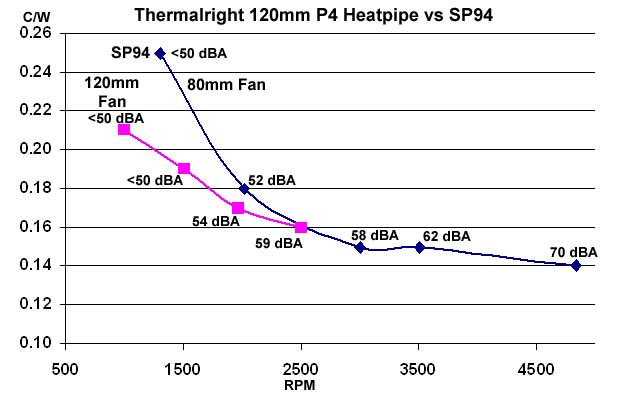 I should note that in my tests, 50 dBA measured 8″ from the fan intake corresponds to about 30 dBA measured 3 feet from the fan; this is a very quiet noise level. The 120mm fan at 1500 rpm is quiet, and below that it’s about inaudible.

The graph shows that the 120mm fan flattens out the noise-C/W profile rather nicely. Speeding up the 120mm fan to rpms above 2500 rpm will increase noise to uncomfortable levels, defeating the purpose of using the 120mm fan. For reduced noise at very good performance levels, the 120mm is a clear winner.

Thermalright’s 120mm P4 Heatpipe is well made and an excellent choice for low noise P4 cooling. Mating Thermalright’s Heatpipe with a variable speed fan might be the preferred approach for the power user looking for peak performance followed by a quiet night’s sleep. Prescott users might want to consider this heatsink for effective cooling.

The Thermalright Heatpipe will be available from The Heatsink Factory; if this is of real interest to you, you might want to reserve one early.

Bench vs. System Testing: The Pros and Cons

In my never ending tinkering with my computer the other day I managed to how shall I say…smoke test my extra power supply. This was my peltier power supply an old 175 watt AT from a Packard bell R.I.P. What