SUMMARY: Exceptional performance, but this is not a production version. 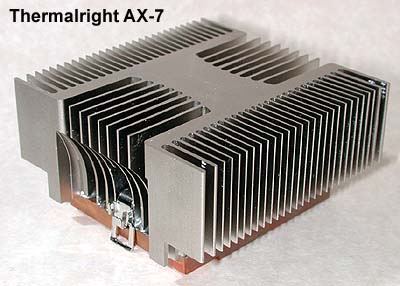 The good guys at Thermalright were nice enough to send a prototype of their 80mm heatsink, the AX-7. I think there is a new category of heatsinks – I’m going to call these the “SuperSinks”. These are heatsinks which use an 80mm fan, have considerable physical “bulk” and push the limits of aircooling performance. The other contenders are the Alpha 8045 and Swiftech’s 462/478. The AX-7 is about the same size.

Thermalright’s design is very interesting. If you look down at it, 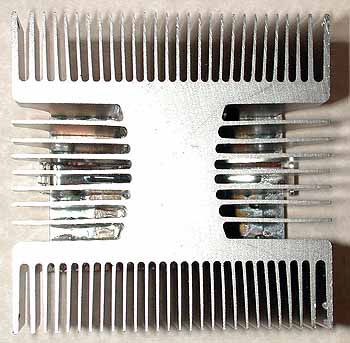 you see that there is a central aluminum core over the CPU die. Surrounding the core are the coolings fins. This design recognizes the “dead spot” immediately under the fan hub and fills this space with heat absorbing metal. The fins then wick the heat from the central core. Note also that air flow through this fin pattern is omni-directional; airflow through the fins cool surrounding components on the motherboard and the CPU carrier as well. 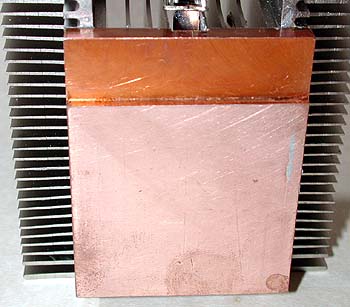 is solid copper, measuring 50 x 63 x 8mm thick. The fin structure is soldered onto the copper base. As a prototype, it is not a “polished” job. If you look from the front 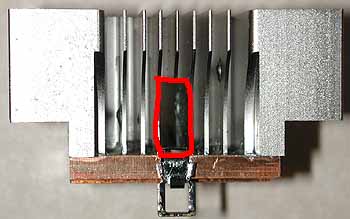 you can see that the clip rides in a channel (outlined in red) cut through the center of the fin assembly. The clip is not indexed and on this prototype was terrible; I had to use an angled screwdriver to mount/dismount it. However, I know Thermalright is not planning to use this one, so I can’t fault them.

Overall, the AX-7 is an interesting design.

The AX-7 was first tested on the CPU Die Simulator which gives results that are unaffected by motherboard influences. Tests then were conducted on a motherboard as an example of what users might see on their systems.

Next, I tested the AX-7 on an Iwill XP333 which is modified to take direct die readings from AMD XPs and Palominos. I also epoxied a thermocouple on the back of a Palomino 1200 for CPU back readings.

Performance on a motherboard and the Die Simulator indicate that the prototype is a top rate heatsink. These results, if they hold up in the production version (depends on which fan, final design, etc.), would place the AX-7 in the highest rank of heatsinks we have tested (Heatsink Rankings HERE).

The AX-7 looks very promising. IF Thermalright can produce it and IF it comes in at an attractive price point, they just might pull another “SK6” on the competition.

Thanks again to Thermalright for sending the AX-7 our way – an interesting design.