SUMMARY: Thermalright’s CB-6L copper/aluminum hybrid does quite well with a Delta 38 for Socket A cooling. 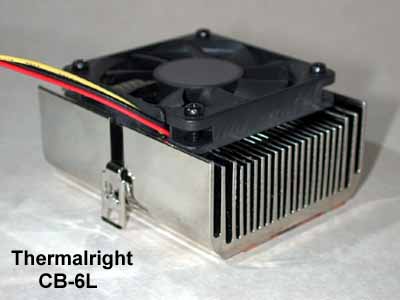 Thermalright is introducing a new product that is engineered along more conventional lines than its copper SK6: the CB-6L. They sent one to us for testing. It features a copper base that appears to be soldered onto its aluminum fins. It arrived powered by an anemic 60x15mm fan that is very quiet but lacks the “oomph” to make this a serious contender among performance heatsinks – like its own SK6 with a Delta 38.

I’m sure that Thermalright is marketing the CB-6L as an OEM or lower cost unit to round out their product line. As such, it looks like a unit worthy of consideration, but performance is highly dependent upon the fan used.

The clip is what I call the “OEM Clip” – it requires a screwdriver to mount and dismount – as does the SK6. It is quite secure, but not very user friendly. 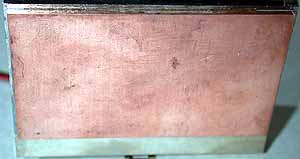 The base is a copper plate that extends the length of the heatsink (77mm – this is not designed for Socket 370 use, although I was able to mount it on Iwill’s BD133). It is not finely polished but it’s free from noticeable machining marks. Where the Thermalright may have an edge is on the bond between the aluminum base and copper plate:

As this pic shows, this is not a mechanical bond (e.g, using screws) that I have seen on many other hybrids; rather, it appears that it is soldered – a very tricky process. What this does, however, is to markedly increase the heat transfer between the copper-aluminum surfaces; a mechanical bond usually relies on pressure and thermal grease. The other alternative is the Alpha approach – a “shrink fit” – which, done correctly, is very efficient.

I prepared the Thermalright by boring a hole completely through the base so I could epoxy a thermocouple above the CPU. The thermocouple is attached to an Omega HH23 Digital Thermometer. Ambient temps were measured with a thermocouple placed about 1 inch from the fan’s intake. I used Prime 95 to stress the CPU on an Iwill BD133 (MBM temps are on-die) and ABIT KT7. Arctic Silver grease was used in all tests. CPU Case Temp is the temp at that point where the CPU contacts the heatsink, CPU Back Temps are measured by a thermocouple on the center back of the CPU.

Socket A results place the Thermalright towards the mid to lower end of C/Ws for “acceptable” (C/W < 0.30) Socket A heatsink cooling with the Delta 38. I tested the Duron with the YS Tech to see how it would fare, and it bumped it out of the acceptable range. The heatsink became quite warm to the touch; this indicates that, with the YS Tech in high wattage conditions, the CB-6L is starting to saturate (like “hitting the wall”). The stock fan is a non-starter, as is the YS Tech with a high wattage T-Bird.

PIII cooling is most likely not an option on most motherboards, as it may not clear capacitors around the socket. Performance is OK on PIIIs but nothing to get excited about.

Thermalright’s CB-6L is a competitive Socket A cooling solution among “performance” heatsinks, although many will find the Delta 38 annoying and untenable. The YS Tech could be a option for OK cooling, but not recommended for power users. The stock fan is not a serious option. depending on price, the CB-6L could be a good price/performance buy.

Many thanks to the good folks at Thermalright for sending the CB-6L our way.

SUMMARY: The Golden Orb is a capable heatsink and the PIII version should be a standout performer. NATA Computers was kind enough to send me an advance sample of the new PIII Golden Orb. We tested the Socket 370 version