The good folks at Thermalright sent me a pre-production sample of their heatsinks to test. I am impressed! Assuming Thermalright delivers the same outstanding performance of these samples, I think purchasers will be pleased. I do have one caveat: The outstanding performance was with a Delta 38 cfm fan; this is one I would not recommend due to its highly irritating noise level, as many have found out. Even so, the Thermalright delivers equal or better performance with a quieter 24 cfm fan compared to others using the Delta 38 cfm unit.

70 fins for a fins surface area of about one square foot (the larger model).

If you look closely at the Thermalright, you will see 70 fins about as thick as an index card; this yields a total estimated surface area of one square foot. LOTS of cooling potential. More important, the fins are soldered onto the copper base which results in very efficient heat transfer between the base and fins, compared to some others that use a press fit. 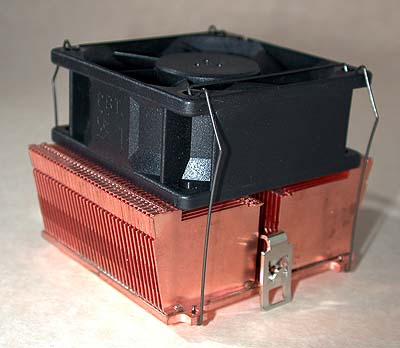 The SK6 weighs in at about 415 grams – the smaller model (SK6ab) could not be tested – the fins were too close for the clip to ride in its channel.

The package is really quite small – it measures 2 1/4″ square on the base by 2 1/4″ high with the fan. The fan the larger heatsink (SK6) uses is a SUNON that has slightly less airflow than the YS Tech. I tested the SK6 with both it and a Delta 38 using motherboards and a static test block.

My pal Andy Lemont at Millenium is very kindly using his metal working skills to build me a test block that will enable me to do static tests in conjunction with motherboard tests. As shown below, 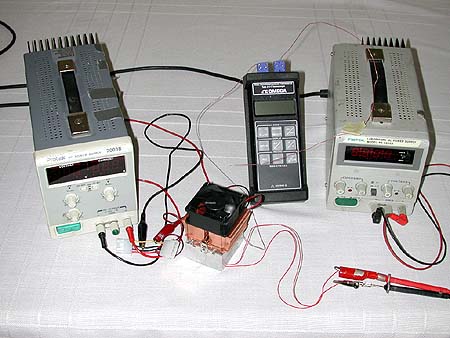 the Static Test Bed comprises a solid aluminum block machined to simulate the footprint of an AMD T-Bird. On the base is a heater that is powered by a lab power supply which can be set to a precise watt load. A second power supply is used to power the fan. The heatsinks are prepared as usual, with a thermocouple bored into the center. Temps are measured by a digital thermometer, in my case an Omega HH23.

This is a close-up of the aluminum block (a great find at my local metals scrap yard) with the Thermalright on it: 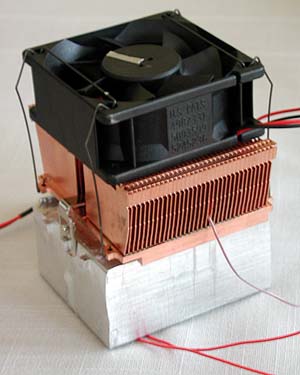 The aluminum block will be sheathed in insulation to avoid heat loss.

Machined into the block are lugs which simulate the socket’s clip loading.

The procedure is turn the power supply on, “dial in” a wattage setting (in this run I used 50 watts – we are adding heaters to get to 70 to 100 watt loads) and let the block warm up with the heatsink powered up. After about 15 minutes, temps stabilize and temp readings are then taken. Results are then tabulated along with results from motherboard tests. It is my intention to include static testing along with AMD and Intel CPUs on motherboards, so that readers will have confirming results from multiple platforms.

Outstanding performance with the Delta and very competitive with the Sunon. I noticed that there is good airflow through the fins and onto the motherboard, which aids in cooling power regulators and other nearby chips. The heatsink was almost cool to the touch, with the exception of the T-Bird at 1397 – warm but not hot.

The Sunon fan is much easier on the ears and not too shabby on performance either – it’s about the same level as many heatsinks using Delta 38s to attain C/Ws in the 0.25 range. Even for hot T-Birds, the relatively quiet Sunon is not a bad choice; for Intel’s power misers, the Thermalright with the Sunon looks like a GREAT cooling solution – super performance at low noise.

For performance at the expense of your hearing, the Delta 38 clearly is outstanding; unfortunately, noise at this level is not something I would use, but that’s your choice.

I tested a pre-production sample – basically a hand-made unit. Availability is expected around May 10, so as soon as a production sample is available, we’ll run another test series. MSRP for the SK6 is $45 with fan and $39 without. You can purchase from Thermalright directly when available.

Like most overclockers, I began at a very wee age (at least 6 months ago) when I bought my first Athlon. Once I had assembled my Athlon 700 with an K7V mobo, I was shocked at the 94F temperature on