New pictures of the upcoming HR-22 CPU cooler have hit the web. Thermalright’s new flagship heatsink is meant to be the successor of their already big HR-02 and is said to bring improvements in the cooling and compatibility departments, notably for use with tall memory modules.

While the official specifications haven’t been released yet, the leaked pictures point to the behemoth featuring eight 6mm heatpipes bent in a U-shape configuration and metal clips to hold a single 140mm fan. As is the tradition at Thermalright, the HR-22 is expected to contact the CPU with a nickel plated copper base and dissipate the heat by means of an aluminum fin stack. The sheer size of this unit will surely make it suitable for fanless operation on lower TDP processors; at the same time it seems ready for mounting a second set of clips for adding another 140mm fan for maximum dissipation on higher TDP CPUs.

The company did not mention any availability dates nor did it name a price. Considering the flagship status of this cooler, it is expected to be in the top of the price range, flirting with top notch AIO liquid coolers. What remains to be seen is if it can also compete in terms of performance.

Thermalright has recently brought to market a huge new ‘fanless’ CPU heatsink for most sockets including 775, 1156, 1366, AM2/3, and 939 called the HR-02. The HR-02 is touted as having the cooling capacity to be able to run fanless. According to Expreview.com, who is one of the few sites that has had a chance to review this piece, there are several design implementations that help this monster achieve that bold statement.

Today, Thermalright announced the Archon heatsink, a new tower CPU cooler. The cooler is thinner than standard tower heatsinks, which Thermalright claims will eliminate compatibility issues with large memory heatspreaders. Boasting compatibility with Intel’s 1156 and 1366 sockets, the Archon also comes with the same AMD bracket system as the Venomous X. Also included is a 140 mm TY-140 fan, but users can mount their own 120 or 140 mm fan.

Thermalright is a name that has been synonymous with enthusiast-level air cooling for quite a while now. Their venerable Ultra 120 Extreme (aka the TRUE) has won accolades and was once the favorite high end air cooler among overclockers worldwide. In recent times, the TRUE has fallen behind a little bit. While still one of the top air coolers, it’s not quite standing alone on the podium as it once was.

Thermalright aims to up their game with the recently released Venomous X, which we’re going to have a look at today.

That is an epic heatsink.

That thing makes my Ultra 120 Extreme look tiny by comparison.

I would venture to guess it needs a fan with a fairly high rpm to get enough airflow through the heatsink. I wonder if it will fit a 120mm or 140mm fan.

That thing is huge. Will it get in the way of my PSU?

If it works it works.

Wow! This looks twice the size of the TRUE 120! If my Swiftech H220 craps out again I might just have to go with this. It probably cools the cpu just as well.

I stil have my TRUE 120 in my HTPC cooling my Q6600. I switched to Noctua though in my recent build due to Thermalright products not being available in Canada anymore. Just a few online retailers with old stock they haven't gotten rid of yet, no one seems to have new Thermalright products here.

It says it will fit a 140mm fan, but you can see little holes on the other side to mount another wire clip for attaching a second fan. It looks like it will fit 2 x 140mm fans in total.

That thing is huge. Will it get in the way of my PSU?

Here are some pictures of the beast installed in a case, showed off at Computex: http://www.techpowerup.com/185376/thermalright-hr-22-makes-public-appearance.html

This beast should be better than most all in one water solutions i think, metal carry heat 100 times faster than water and there is enough fins to beat allot of rads out there, waiting for a review guys :popcorn:

Gurl, look at those heatpipes

Okay... One of Thermalright's heatsink cases... 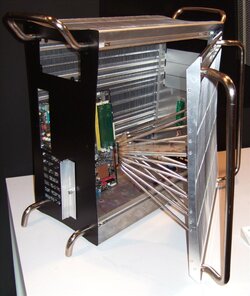