SUMMARY: Another solid performer from Thermalright. 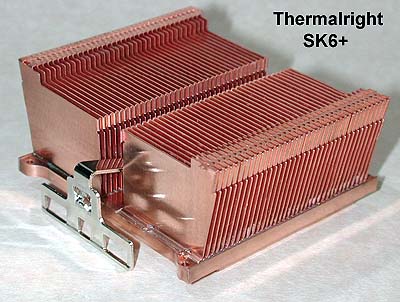 The kind folks at Thermalright were nice enough to send a sample of their latest heatsink, the SK6+. This is similar to the SK6 but heavier – the SK6+ weighs in at about 400 grams while the SK6 is 330 grams – more copper for better cooling performance. 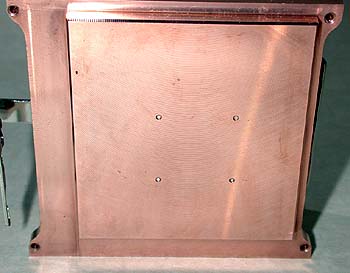 When I ran my nail over it, I could barely hear, but not feel, the polishing marks. The clip engages all three heatsink lugs although it requires a screwdriver to mount. The SK6+ ships with two sets of clips to mount 25 mm and 38 mm fans, as well as a tube of thermal grease: 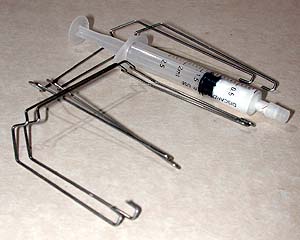 In summary, a copper heatsink with a secure clip (screwdriver needed).

The SK6+ was first tested on the CPU Die Simulator which gives results that are unaffected by motherboard influences. I then tested it on a Shuttle AK31, modified to read AMD’s on-die diode, as an example of what users might see on their systems.

The fan I used was a Delta 60, Model #FFB0612SHE – a 60 x 38mm unit rated at 43 cfm @ 7000 rpm, 50 dBA. I varied voltages to develop a range of rpms and C/Ws so readers can evaluate performance with different fans. I measured noise at various rpm settings, as noted below:

The difference between a screaming 7000+ rpm and a tolerable 4000 rpm is 6 C. Users might consider using a rheostat or a temperature controlled fan to moderate noise as requirements dictate.

Thermalright’s updated SK6+ is a very competitive entry. Performance scales nicely with rpms, so tradeoffs between performance and noise are predictable.

Water Cooling: Kit vs Do It Yourself (DIY)