This experiment grew out of my curiosity as to how well an upper echelon socket A/370 heatsink would perform on a P4 processor compared to an upper echelon P4 heatsink. I wanted to compare idle and 100% load temps for each configuration. Since this experiment was not intended to be scientific but only to satisfy my curiosity, I didn’t test using the same exact fan for both heatsinks.

I tested instead with the combinations I would consider using (and have used) in my own boxes, taking noise and to some extent cost into consideration. I did try to standardize how my temperature readings were obtained by testing at the same time each day and using the same motherboard, case, CPU, run cycle, etc., and using the readings taken from Motherboard Monitor 5.2.10.

Millennium Thermal Solutions released some time ago an adapter for P4 motherboards that allows the use of socket A/370 heatsinks on P4’s. I have no idea how well this product has been received in the marketplace, but I bought two. 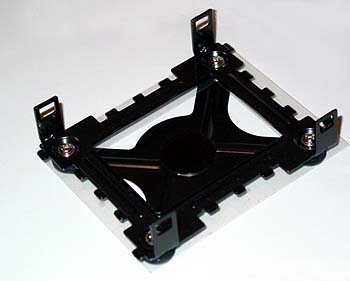 I am a hardware junkie. If an interesting piece of hardware comes out, I will more than likely buy one just to play with it. This product intrigued me, but until a few weeks ago I did not have the opportunity to try it out. I own a lot of older socket A/370 heatsinks (Agilent Arcticooler, Alpha Pal6035’s and PEP66’s), but I would not consider using any of these on a P4.

In early December, a west coast retailer had a Christmas sale on Thermalright heatsinks, so I bought an SK-7 for $20. This was a very attractive price at that time for an upper tier socket A/370 heatsink. I had some concerns about the offset in the spring clip, where the clip clamps down on the heatsink not being directly over the center of the P4’s IHS, but these concerns were unfounded.

I paired it with a YS Tech TMD fan left over from a purchase a few months ago. This is the lower speed model rated for about 30 cfm. I have the 36 cfm model also, but I would have to disassemble it from a Swiftech MCX4000, which I was not willing to do. Also, the lower speed model is a bit quieter. 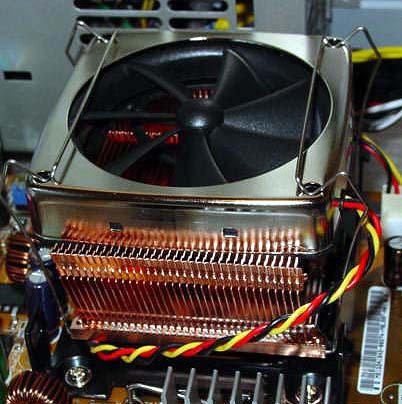 The SK7/TMD combo would go up against an Alpha PAL8942/Sunon 39cfm 80mm fan combination. This is my standard P4 setup (I have three of them). I’ve been in love with Alpha since I bought my first one from Overclockers.com way back in the 20th century (used it on a K6-2). The Sunon is a good compromise between noise and performance and was set to suck the air off the pins as per standard Alpha instructions. 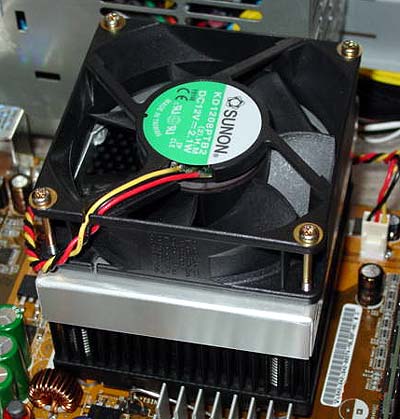 My experiment setup (also my daughter’s rig – she was happy when I finished) is as follows:

All case side panels were left in place and nothing was left disconnected.

My experimental methodology was as follows:

I tested each combination once each day on three successive days for each experiment (idle or 100% load) and averaged the averages. This was not really required, as the same average readings were observed for each set of tests for each combination.

Naturally, the idle test is just that – the system would sit with just the OS running. For the 100% load test, I would run the Prime95 torture test. I applied a fresh coat of GC Electronics Type 44 synthetic ester based thermal compound on the IHS of the P4 before each set of tests with each heatsink.

The final results are VERY interesting:

I will not go into a discussion about the construction of each individual heatsink because they are well known in the industry, but it appears to me that 100% copper construction has its merits when paired with lower cfm fans. The results obtained are so close they must be considered identical.

I assume that if I switched to the higher speed TMD fan, I would reduce the idle and load temps by 1 or 2 deg C. I’m sure the smaller center hub of the TMD fan also plays a part in this. My experimental results pleasantly surprised me and my assumptions seem to be setting me up for a future experiment, as I have already placed an order for a Thermalright SLK800.

At present, I will be keeping the Alpha/Sunon combination in the box because it really is an unobtrusive setup, noise-wise, and I don’t want to take everything out again to replace it with the similar performing SK7/TMD. For those who may question my temps, remember that this is only an experiment, not a scientific test.

This test system is sitting on the floor in the basement of my house, located in Minnesota where it is winter, and even though we’ve had a mild winter so far, we still try to pump HEAT into the house at this time of the year.

Ambient temperatures near the floor are in the 16 C range, or about 62 F. I have also heard and read of many reports where the temp sensors of the P4PE seem to be reading high – this is not my experience. The P4PE replaced an Epox EP-4BDA2+ and with exactly the same setup, the Epox was reporting about 2 C higher CPU temps.

As always, these are my results and any results you obtain if you do similar testing will be different.