SUMMARY: Top Rank socket A cooling, depending on noise preference. 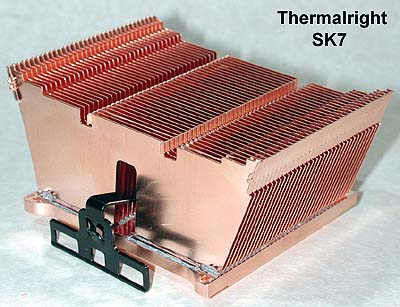 The kind folks at Thermalright were nice enough to send a sample of their latest heatsink, the SK7. We took a look at the Thermalright SK6+ earlier, and it’s not a stretch (actually, it was) for Thermalright to come up with an 80mm version, the SK7. 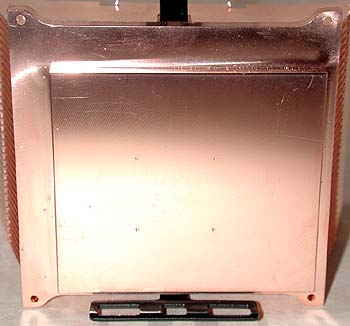 finish is very good – there are no polishing marks on it, although not a polished finish; lapping might improve performance a tad but I think not worth the effort.

One notable factor in the SK7’s favor is the amount of air flowing onot the motherboard due to the 80mm fan overhanging the heatsink’s sides – the top measures 85 x 58mm. There is a significant secondary cooling benefit as a result, and components around the heatsink should run cooler. In addition, since the motherboard acts as a secondary CPU heatsink, there will be a positive impact on CPU cooling.

The clip mounts on all three of the socket’s lugs – a plus. However, you must use a screwdriver to engage the lugs. As with all screwdriver-assisted mountings, make doubly sure the screwdriver tip is securely in the clip’s slot – a slip under pressure could trash a motherboard.

Included with the SK7 are fan clips for 60, 70 and 80 mm fan mounting – very
versatile – plus a small tube of non-descript thermal grease.

I measured noise using a Radio Shack sound meter placed 8″ from the fan’s intake and recorded noise at a number of rpms – these should not be far off the mark far other 80mm fans at similar rpms. I normalized the readings I found to the manufacturer’s spec for the fan, as shown in the table below.

The SK7 was first tested on the CPU Die Simulator which gives results that are unaffected by motherboard influences. I then tested it on a Shuttle AK31, which is modified to read AMD CPU die temps directly, as an example of what users might see on their systems.

The difference between aggressive cooling/high noise and “reasonable” cooling and noise is about 9 C over 100 watts. For a CPU radiating half that, the difference starts to fade very quickly (note: 38 dBA is the generally accepted noise standard for PCs).

Thermalright’s SK7 is a fine choice for Socket A cooling. Depending on how aggressive your cooling requirements are, noise can range from the sublime to the ridiculous.

The SK7 is available from The Heatsink Factory.