SUMMARY: An excellent choice for aggressive CPU cooling, but noise may be an issue. 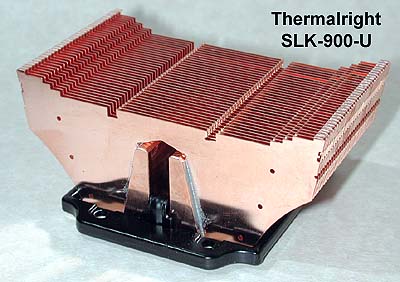 The good guys at Thermalright were nice enough to send their latest, the SLK-900-U for a test spin. This is the largest of the SLK series – it measures 99mm x 55mm x 43mm high – without fan – and weighs in at about 570 grams. Due to its size, only 80mm and 70mm fans can be installed if used for P4 cooling with the standard retention bracket.

The SLK-900-U ships with parts for Socket A and P4 mounting: 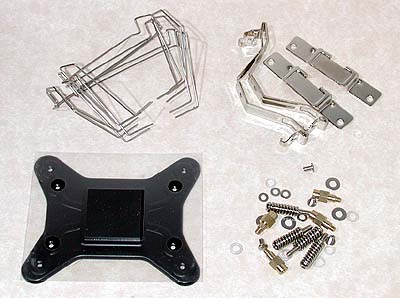 In addition, fans ranging from 70 to 92mm can be mounted on the SLK-900-U, with the exception noted above. 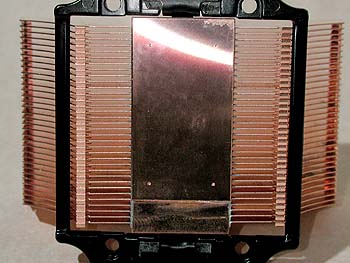 I measured fan noise with a Radio Shack sound meter 8″ from the fan’s intake. These are not comparable to noise levels reported by fan manufacturers; noise is usually measured at three feet from the fan.

The SLK-900-U was tested on the CPU Die Simulator which gives results that are unaffected by motherboard influences.

Die Simulator results place the SLK-900-U in the top rank of heatsinks tested to date (Heatsink Ranking). Note that at about the same rpms, there is no major difference between the 80 and 92mm fans.

Thermalright’s SLK-900-U is an excellent choice for aggressive CPU cooling. However, the more aggressive the fan used, the higher the noise level – no surprise. At a minimum, a rheostat might be required if your PC is “24-7”.

The SLK-900-U will be available from The Heatsink Factory.

Email from Jason: “Recently I purchased a 550E and wanted to see if I could get the baby up to 913 or higher on a PR133A VIA chipset. I sent some digital pics the last time when I was water