SUMMARY: Outstanding performance; depending on your noise tolerance, the SLK600 scales very nicely.

The good guys at Thermalright were nice enough to send the production version of their SLK600 (prototype review HERE). I found performance levels similar to those of the prototype, so the translation to production went very well. 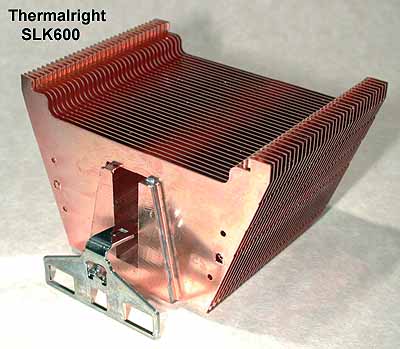 The base is quite nice: 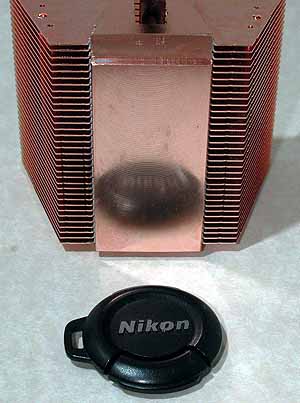 Hoot lapped it to a mirror finish and gained 2C better performance.

First, the SLK600 was tested on the CPU Die Simulator which gives results that are unaffected by motherboard influences. Since results are the same as the prototype, you can refer to these tests for motherboard results.

I then used four 60mm fans to develop noise/performance curves:

I measured noise at different rpm settings with a Radio Shack sound meter placed 8″ from the fan’s intake. Based on the relationship between my reading and the spec ratings for each fan, I normalized my readings to the spec dBAs (except for the Stealth – it’s so quiet my sound meter will not register). 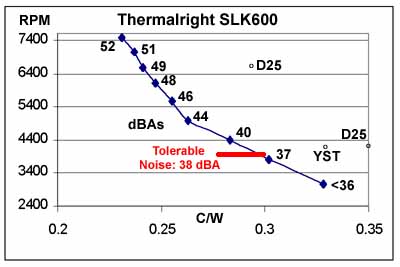 Note that the Delta 44cfm unit turns in better performance at comparable cfms – the flow straighteners are a plus. The difference between the YS Tech and Delta 38 at 4200 rpm is minimal – an indication that similar fan designs will turn in about the same performance at equal rpms.

Note also that performance is at the expense of noise – the “tolerable” dBA level is 38 dBA, and almost all the points lie above this level. The Vantec Stealth is indeed very low noise, but in the finest traditions of “no such thing as a free lunch”, the price is about 20C less cooling compared to the Delta 43cfm unit at spec.

The SLK600 is a top choice for CPU cooling; however, factoring noise considerations and fan selection into the equation may mitigate realized performance.

Thanks again to Thermalright for sending this our way. The SLK600 is available from Heatsink Factory.

I recently received Thermalright’s newest Socket A/370 offering, the SLK600, and have had a couple of days to do some evaluation on it. Here’s what I’ve found thus far;

This is my first all copper heatsink that’s not a Millennium Glaciator. When I picked up the box at the Post Office, my first impression was “Gee, this box is light for a solid copper sink…” It is. Weighing in at 430 grams, it’s considerably lighter than the Glaciator II (615 grams). The version I received was the “bare heatsink”. The clips for mounting the fan are included, as well as a small packet of thermal interface, and eight small pads, similar to what’s mounted on AMD processors.

The heatsink is well packaged in a quite sturdy box. Upon removing the heatsink from the plastic bag in the box, I realized why. Cooling fins – lots of them and very thin, at least in comparison to the Glaciator. I could easily see how dropping one of these sinks could bend the fins fairly easily. I handled it like it was glass, so I don’t find out how easily….

As I mentioned, there’s lots of fins – 34 of them. In the center of them is a pyramid shaped block of copper, with a slot in the middle for the retention clip. The fins extend out a bit on the bottom from it, and widen out at the top. There’s a lot of surface area exposed, which is a good thing for heatsinks. The more surface area, the better the heat transfer to the air.

The retention clip is a three-lug beauty. If you have a board with a broken center lug, dig it out of the mothballs as this will clip on the remaining five lugs. I like this a lot. I’ve never broken a lug off of a socket, but know many who have. It’s a bit stiff to bend onto the lugs, but once it’s there, it’s not coming off until you want it off. A straight edge screwdriver or similar instrument is needed to install/remove the clip.

The optional fan that can be purchased with the SLK600 is a 60x60x38mm Delta, 50 cfm. I wish I had one to test with, as I believe it really would have been an improvement over what I had available. The tests I ran were with a YS Tech 60x60x25mm, 27 cfm unit, and the obligatory 60mm Delta “38” cfm. Fortunately, Thermalright provides two sets of mounting holes for the fan retention clips and even marks them “25” and “38” (mm).

I had a Millennium Glaciator II mounted in my test machine and took some notes on it’s performance for comparison later.

Before I go further, my “test machine” consists of:

This is all mounted in a 4Q Full tower case, modded fairly extensively (120mm front intake, added 60mm exhaust beside the I/O ports, 92mm “blowhole” over the CPU). Also installed is an Antec PP-352X 350W dual fan PSU and a “Compunurse” with the probe positioned above and between the heatsink and RAM, out of the direct path of the blowhole in the side panel.

I went through the usual routine of cleaning all of the old thermal compound off of the CPU, and was going to just clean the base of the SLK600, but noticed there was a thin layer of what appeared to be plastic on the base. The isopropyl (rubbing) alcohol melted the edges a bit, and made them cloudy. I wound up lapping the base with 600 grit wet/dry sandpaper to remove it and the light machine marks left in the base from manufacturing.

The way the socket is positioned on the MSI almost necessitated removing the motherboard from the case. I was able to get it positioned without having to do so. That’s one of the few things I don’t like about this MSI board…the “north/south” orientation of the socket. I used Arctic Silver 3 thermal compound when assembling.

The first fan I tested on the SLK600 was the YS Tech. I was a bit disappointed with the results. My CPU temperature was higher with this setup than with the Millennium Glaciator II. I took some notes and shut down to swap in the Delta “38”. It’s been a while since I’ve used this fan and I’d forgotten how loud it is… There’s only two fans running right now that I can hear over my 120mm front intake, and this is one of them (the other is in the air conditioner in the window…lol).

This fan gave me much better results. This is why I wish I had the Delta 50 cfm…I think this fan will really make this heatsink work as intended. The fan change alone was good for 5-6 C. I would imagine the 50 cfm model would be good for another 5 degrees over the 38 cfm one.

But, there’s a tradeoff – Noise. The higher the cfm you push thru the fins, the louder that fan is going to be.

Here’s what I got for numbers from the SLK600, with both fans (all measurements in celsius). All readings are under full load running [email protected] and SiSoft Sandra “Burn In” simultaneously. The MSI software program erroneously reports the CPU temperature 5C above what the BIOS and SiSoft Sandra reports. The latter two numbers (BIOS/Sandra) are in parentheses below.

Those temps are a bit warm, but so was the ambient that day. For comparison, here’s what I was getting for temps just prior to installing the SLK600:

So, we find these last numbers land right in the middle of the first two sets above. With the YS Tech 27cfm fan, the SLK600 is a reasonably quite, decent performer. With the addition of a higher output fan, it becomes a very good performer, but the noise level increases, as well. I can only imagine what the Delta “50” sounds like…

So we’re back to that age old air cooling dilemma: Noise vs. Performance.

The SLK600 seems to be a well designed component, if a high enough output fan is used with it. Skimp on the fan and the temperatures suffer. Overall, I’m pleased with the results. I’ve gotten used to the “whine” of the Delta “38” again and don’t really “hear” it anymore (especially when the AC is on…).

Let’s take a look at a few details of the SLK600 vs. the Glaciator II, head to head:

Weight: The MG II weighs almost a third heavier than the SLK600. When I first got the MG II, I feared it was going to pull the socket right off the motherboard! (it didn’t). I don’t get that feeling with the SLK600. Edge to SLK600.

Durability: The fins on the SLK600 are fairly thin. In the process of installing it, while juggling the clip, screwdriver, and sink, I did manage to bend the corners of a couple of fins, although they were easily straightened out, however. The MG II is built like a Sherman tank. Dropping it will not damage anything, with the possible exception of the floor. Edge to MG II.

Fan replacement: Not something we like to think about, but occasionally a fan does “go south” on us. I’ve never had a CPU fan go, but have had a northbridge fan die on me. The all copper heatsinks have the ability to radiate enough heat without the fan to keep your CPU alive, if your case cooling is really good.

The SLK600 is a snap to swap fans out on – two clips and you’re done. The fan in the MG II is recessed down into the heatsink, integral in its design, but a difficult proposition to try to replace. Edge to SLK 600.

Retention clip: The MG II uses a “hinged” clip, utilizing just the center lug on the socket. Less pressure is needed to secure it and the hinge makes it really easy to install. Once installed, the heatsink stays in place very well.

The SLK 600 uses a three lug design on the clip, non hinged. A screwdriver (or similar) is required to install or remove it. It requires more pressure as well. But that three lug design really keeps the heatsink still. Draw.

Noise level: How loud do you want it? The SLK will out perform the MG II, but the cost is noise. Edge to MG II.

Final analysis: The Thermalright SLK600 is a well designed, constructed component. It’s cooling capabilities should rank it near or at the top of its class. It’s Achille’s heel is having to run a loud fan to achieve it.

I’d like to thank Thermalright for the SLK600 I used in this article.

“Learn to overclock at www.Overclockers.com”

For further information about Thermalright or its products, contact us from the information listed below:

Our people will reply to you immediately to ensure the best quality to our customers.

* Spec. subject to change without notice

SUMMARY: A head-to-head test of the best Socket A heatsinks. AMD’s Socket A CPUs pump out a LOT of heat. As a result, heatsinks have become much more efficient – we’re now seeing C/Ws of 0.3 and below from the

Probably the first to do this – Ken Hyatt