Thermalright was founded in 2001, a long time ago in computer time. Since the outset, Thermalright has focused on heatsinks and fans — just cooling. No Thermalright PSU’s or cases. Even their accessories involve heatsinks and airflow. This is one dedicated company. Today we will be looking at two of Thermalright’s 140 mm PWM fans, the TY-143 and the TY-147A. If you have been following 140 mm fans at all, you know that Thermalright’s TY series of PWM fans are said to be among the best. Are They? Thermalright has sent us a pair of each to evaluate. Let us see. 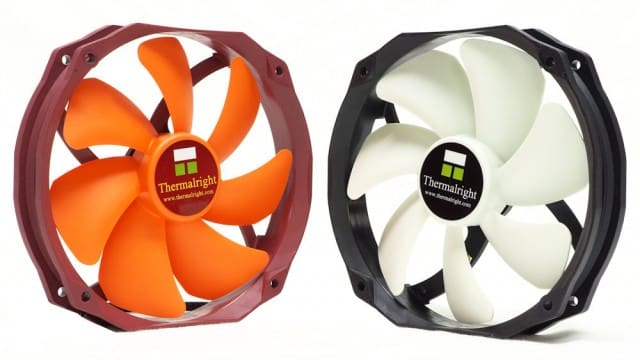 About the TY-143, Thermalright tells us:

Aerodynamic body–Less friction around the edges and give more centered and concentrated airflow.

As for the 147A, the only difference in features is that instead of two ball bearings, it has “Enhanced Hyper-Flow Bearing (EHFB) – to ensure consistent and stable rpm, prolonged lifetime of usage.”

Maybe you noticed that these fans do not have square frames. Like the TY-140 and the classic NF-P14, these fans have round frames, with screw-holes the same as for 120 mm fans – in other words, 105 mm apart. These fans go well with any heatsink that uses 120 mm fans but have room for 140 mm fans. These include the NH-D14, NH-D15 and the Megahalems, not to mention a slew of Thermalright heatsinks. If you have fan clips for 120 mm fans or 120 mm style screw-holes, those clips will fit the TY-type 140 mm fans. Thanks to doyll we have permission to use his diagram of these fans: 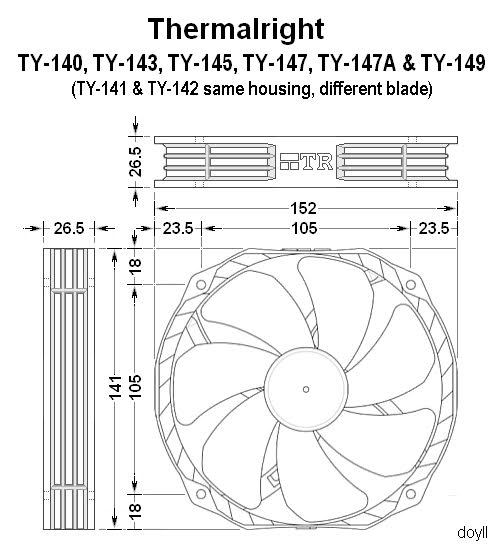 Why doesn’t the TY series also come in square frames? Perhaps this is because Thermalright has been concentrating on heatsinks. They do make a fan with a square frame. It is called the X-Silent 140 and we will look at its performance later. For now, we can examine the specs of these fans. Some specs are on the Web, some were provided directly by Thermalright:

Most Thermalright fans come packaged on plain brown cardboard boxes with no accessories. The boxes outline the features and basic specifications of the fan inside. The packaging is recyclable.

The TY-147A and TY-143 are PWM fans. From the blade coverage, they look to be focused on static pressure. Notice that the fans cables are tightly sleeved and ended with well-fitted heatshrink.

Another issue is blade shape. These blades look to be very like the blade you will find on the impeller of the NF-A14 and the NF-A15.

The fans were tested in an 8x8x8-inch box, with a circular exit window that matched their input aperture. The head of an Extech AN-100 was placed there. It averaged ten CFM measurements. Each fan was tested while pushing through a Hardware Labs Black Ice Nemesis 140GTS radiator (16 FPI). Whew! Lots of names. The second testing condition was to put the fan on the box, covered by a 140 mm generic metal mesh dust filter available through various vendors. Finally, each fan was tested in an unobstructed state.

This was fine for square-framed fans. But the screw-holes of round-framed fans do not line up with the screw-holes of a 140 mm filter. The answer came from an old retail version of the NF-P14. It came with four metal adapters which would reach from the fan’s screw-holes to standard 140 mm screw-holes. Those adapters adapted the fans to the radiator. Looking at the picture, you can see how that worked. Included in the picture is the dust filter it would draw air through, the anemometer head’s handle, and the anemometer itself.

The comparison actually began with square fans. An almost-unused eleven-bladed X-Silent obtained at retail some years previously was tested against two seven-bladed NF-A14 fans, slowed to 1200 RPM. The latter were provided by Noctua. The reason for this test was to see why Thermalright had the X-Silent 140 as its only square frame 140 mm fan.

Following that, the main comparison pitted the round-frame Thermalright TY-14x fans against two “known good” fans, the Noctua NF-A15 and the NF-A14 iPPC 3000, all provided by Noctua (a big thank-you to both fan manufacturers). The fans were matched for speed. Because the NF-A15 fans have a nominal speed of 1200 RPM, those fans and the two TY-147A fans (nominally 1300 RPM) were all slowed to as close to 1200 RPM as I could get them. The TY-143’s have a nominal speed of 2500 RPM and the NF-A14 iPPC have a nominal speed of 3000 RPM, so all of those fans were slowed to 2400 RPM. Speeds on all fans were controlled either by the motherboard’s PWM function or by a Zalman Fan Mate. The results for each of these fans were shown separately to highlight the manufacturing variability that you will find in any man-made thing. All RPM measurements were through a utility on the motherboard.

Let’s look at the X-Silent 140 first. We can see that it is not for radiators. Even on this rad with only 16 fins per inch, it was inhibited. But when there were no obstructions, even at a lower RPM its eleven blades allowed it to catch up to the NF-A14. 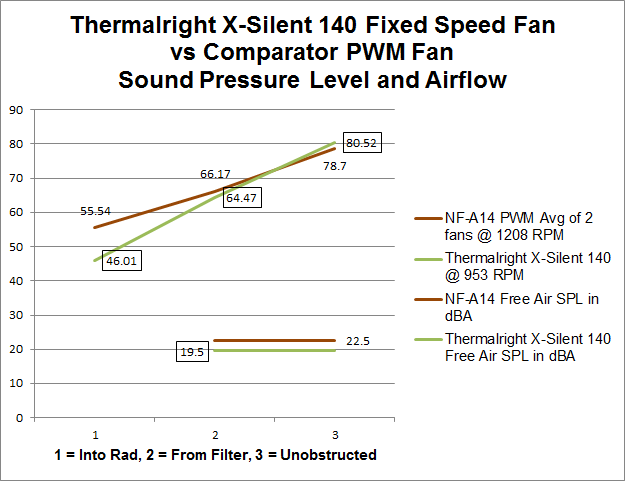 One interesting thing: the X-Silent sounded about as loud as the NF-A14 but it had a higher pitch. This makes sense. In the standard formula, the “Blade Pass Frequency” BPF = n*t/60, where n = rotation velocity in RPM and t = number of blades. The number 60 converts revolutions per minute to beats per second. So, for the X-Silent, 953*11/60 = 174. I checked the pitch with a website named the “Online Tone Generator,” which converts a frequency number to a tone. The calculation and the tone matched. The NF-A14, with its blade-count of 7, sounded lower in pitch than the X-Silent.

Comparing the TY fans to the known good fans at the same RPM, the TY fans did quite well. 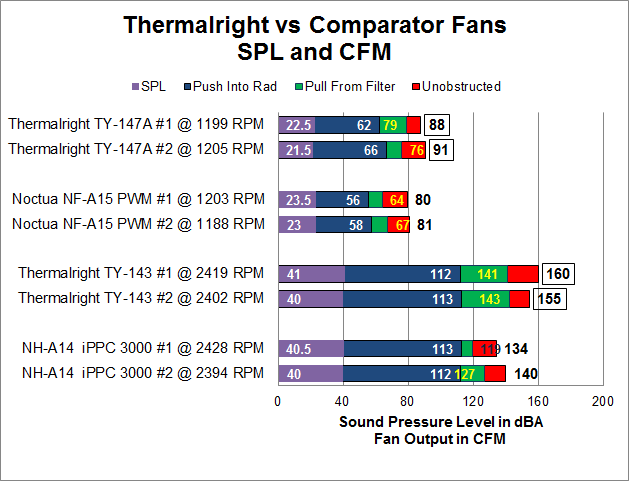 The TY-143 is listed for sale at Nan’s Gaming Gear for $16.95. The TY-147A is listed there for $14.95. At other sites these fans were listed as “Currently Unavailable,” but you could find them mounted to various Thermalright heatsinks.

The TY-143 and the TY-147A fans perform very well. They are quiet, and they push a lot of air. They are controlled by PWM circuits that do not make any noise. The TY-147A even seems to break the rule that good fans have to come in odd colors.

We learned that there is a tradeoff between pitch/frequency and CFM: with more blades you get more CFM but a higher pitch, which doesn’t sound as nice as a lower pitch fan. This might explain why the TY series has fewer blades than the X-Silent.

But most of all we learned that the TY fans from Thermalright are very good fans indeed. And their price is moderate.

Thermalright has finally put their PWM fans in square frames. Long known for their excellent 140 mm PWM heatsink fans, Thermalright finally have those fans ready for radiators. Enthusiasts have admired those blade shapes for years, but they never fit cases or rads, only heatsinks. The TY series has now expanded to include square frames, so they can be placed on 140 mm radiators. With PWM control, they can plug into PWM splitters where they get their power directly from PSU’s to avoid overburdening the motherboard, and still letting you control your fans without needing a separate fan controller. Thermalright sent pairs of these to review, so let’s look at these fans.

Thermalright has recently brought to market a huge new ‘fanless’ CPU heatsink for most sockets including 775, 1156, 1366, AM2/3, and 939 called the HR-02. The HR-02 is touted as having the cooling capacity to be able to run fanless. According to Expreview.com, who is one of the few sites that has had a chance to review this piece, there are several design implementations that help this monster achieve that bold statement.

Muddocktor takes a look at the Thermalright HR-02 Macho heatsink. This is a revamped version of a heatsink introduced last year, modified and with a new price point. The original HR-02 came out several months ago and was aimed at the silent computing market, because it was designed to be fan optional while still dealing with the heat of an overclocked processor. Mudd examines if Thermalright’s engineers did their job properly while meeting a lower price point…