SUMMARY: Thermaltake jumps on the copper bandwagon with an ORB that is acceptable for cooling AMD’s CPUs. 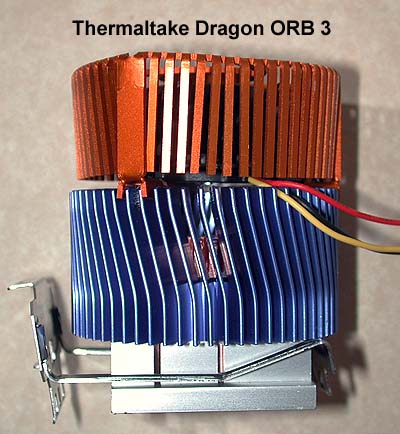 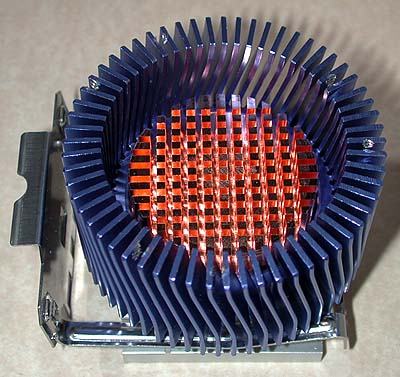 The copper core is surrounded by circle of aluminum fins (blue in the picture above) that looks to be a friction fit. Good cooling performance depends on a very tight fit between the two. 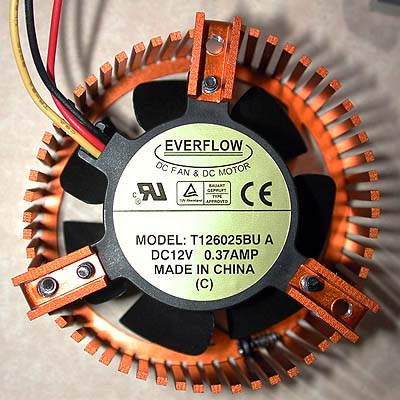 On top of this base sits the fan (7000 rpm, 38 cfm, 37 dBA – Thermaltake specs) surrounded by a ring of very delicate fins. If you hold the ORB 3 by these fins, you will push them in. I expect many will find this out the hard way.

These fins are non-functional for cooling – there is very little contact between the fan assembly and the base, where all the cooling action takes place. As you can see from the pic above, there are three contact points for attachment to the base: 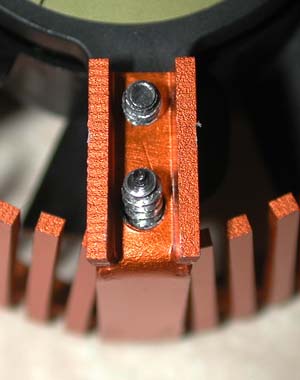 As this detail shows, the fan assembly is screwed onto the base with three metal screws. The point of attachment is minimal: 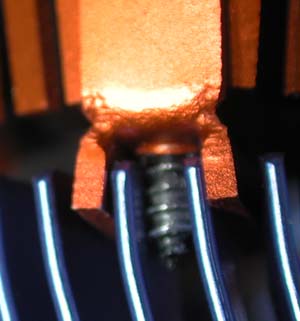 This means that there is little, if any, cooling from the fan assembly’s fins to the base; the sole function of this top piece is to house the fan. 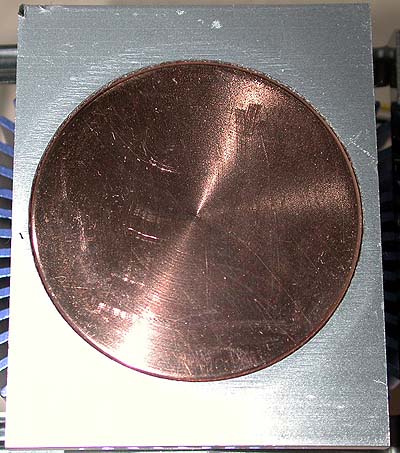 The copper base shows slight concentric machining marks that you can feel by dragging your fingernail over it. The ORB 3 ships with a thermal pad which I did not use – I removed it and used Arctic Silver instead. 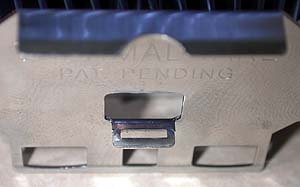 The clip can engage all the socket’s lugs (this I like) and is very secure – so secure that you can’t reasonably expect anyone to mount this heatsink with just your fingers. The semi-circular cutout is for the screwdriver shaft; the tab near the bottom is for the blade. Using a screwdriver, the ORB 3 mounts OK but I found I had to exert some force to get it onto the socket’s lugs.

Getting it off is another matter – I doubt very few can exert enough finger force to get the clip below the socket’s lugs while rotating the clip away from the lugs at the same time. In addition, I inadvertently removed one leg of the clip from the front piece, so please be careful when manipulating this clip.

The clip is very secure partly because the ORB 3 weighs in at about 640 grams – almost 1 1/2 pounds. This is not an AMD or Intel spec heatsink and is clearly targeted to the performance market.

A 1/16″ hole was drilled through the copper core and a thermocouple was epoxied into place over the center of the CPU’s core. Ambient temps are measured 1″ from the heatsink fan’s intake. Fan Noise was 69 dBA, measured using a Radio Shack sound meter placed 8″ from the fan intake; this is slightly less noise than a Delta 38.

CPU back temps were recorded using a thermocouple placed inside the socket and located at the CPU’s back center. Motherboard Monitor (MBM) temps used the in-socket thermistor for AMD CPUs and the on-die diode for the PIII 700E.

The Dragon ORB 3 turns in some respectable test results, placing it about mid-range of the current crop of heatsinks with C/Ws of 0.30 or lower. As for almost all these heatsinks, performance comes at the expense of high noise levels.

This is the first ORB I have tested that performs acceptably for AMD CPUs, so if you’re an “ORBie”, this is one you can use with some degree of comfort.


EK is Officially Introducing its EK-Pro Professional Lineup of Products

During CES earlier this year, EK hinted at a new lineup of products made specifically for professionals. Today, they introduced the EK Professional Line that includes the EK-Pro Manifold and the EK-Pro Quick Disconnect kits. The EK-Pro Manifold features the capability to cool up to 2 CPUs and 4 GPUs, industrial materials, and a no-frills approach by excluding RGB. The EK-Pro Quick Disconnect kits tout an easy installation to transform an existing water block into a powerful machine. There is definitely more to come from this lineup, including workstation GPU waterblocks.