The fine folks at Thermaltake were nice enough to send over a sample of their combination hard drive cooler/dual temp sensor unit called the HARDCANO 2 (how they came up with this name is beyond me – that’s why they call it the “Mysterious East”). 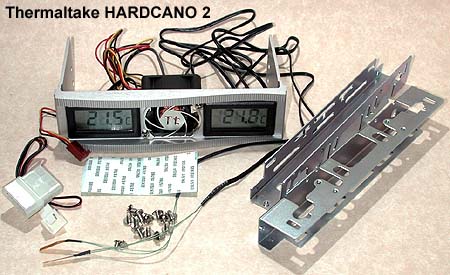 The HARDCANO 2 ships unassembled with a bunch of parts, including drive rails, screws, power plug adapter and tape for the temp probes.
The probes

are thin enough to slip under a heatsink to contact the side of a CPU. The thin green wires are about 4″ long and the probes about 36″ – long enough to mount just about anyplace in a case.

There are three screw types:

The small one is important – there are only two, so don’t lose them. 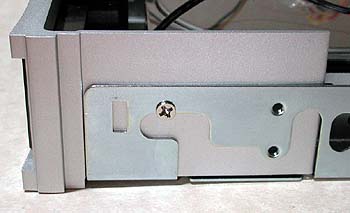 Not that there is only one small screw holding each bracket in place. At first, I thought this would be kind of flimsy, but it does the job. The two holes on the right have raised edges that seat into the side, ensuring that the rail does not rotate.

When you mount the unit into a 5¼” slot, everything snugs up nice and secure. This is what it looks like with a hard drive: 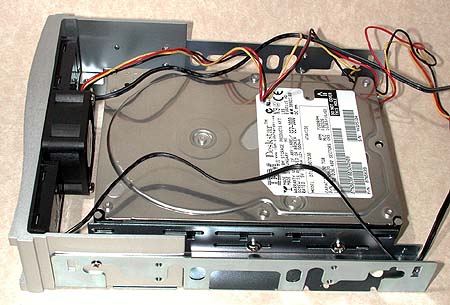 Slip the unit into an empty slot

and you’re off and running.

I checked the temp sensors against my digital thermometer and found them within +/-0.5 C, which is OK. I also found that the sensors did not exactly agree with each other, but only by about 0.3 C – fine for temp monitoring purposes.

Note that the fan’s intake in unobstructed – the airflow, as a result, is pretty close to spec. I placed a probe at the case’s intake fan and one in the side of the hard drive rail so that the fan’s airflow would not hit the probe. After running with and without the fan, I found:

Frankly, this surprised me! I knew if would make some difference, but an almost 5 C is not bad at all. I think the unimpeded airflow helps its effectiveness.

Overall, a nice double-duty addition; gets key temps to the front of the case where you can see them and cools hot drives. For really hot drives, such as some of the IBMs, this looks like one solution.

Thanks again to Thermaltake for sending this our way. Available from Heatsink Factory.

Mel Gibson’s The Passion of the Christ has grossed a third of a billion dollars since its release less than two months ago. It has already made the lists of the top box-office hits of all time, and eventually will

A while back, we asked you for your Athlon codes to see if there really was a downgrade code. What we found was that while the codes might look that way for most processors, there were enough exceptions to disprove

From Travesty To Tragedy . . .

As we reported yesterday, no more socket 939 Opterons None. Not just the cheap ones. All of them, within just a few months of their inception. Why? Well, maybe the proper question is not, “Why did they die?” but rather