Andy Lemont at Millenium lent me his Super ORB to test out. In some of the heatsink testing we did, the Super ORB failed to cool my Duron 800 @ 1000 MHz, 1.93v, enough to keep it from failing Prime 95. Curious to see if this was a fluke, I took the ORB home and did some more testing with it. 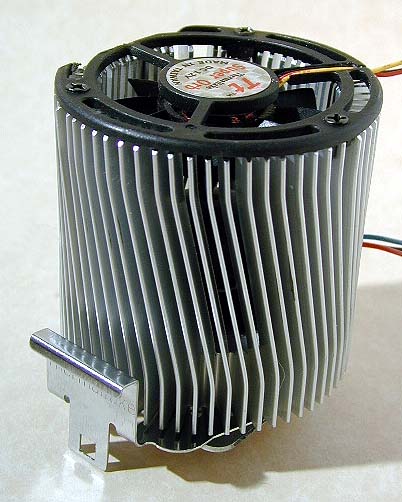 We had to modify the ORB by shaving off some material so it could fit on the ABIT KT7.
TEST SETUP

The ORB was first mounted on an ABIT KT7 running a Duron 800 @ 1000 MHz, 1.93 volts (as reported by Motherboard Monitor). Running at this speed and voltage results in a 53.8 watt heat load from the CPU. I ran Prime 95 until it failed (each time after no more than 15 minutes) and recorded CPU, back and ambient temps using the Omega HH23 Digital Thermometer. CPU temps were recorded by a thermocouple drilled into the heatsink exiting at the CPU’s core top and the back by a thermocouple on the CPU’s center back.

Now if all competitive heatsinks failed the same test, I would say the DURON was over its limit. However, not the case: The Super ORB consistently failed where a Hedgehog, FOP32, Swiftech and Alphas did not. And note that it is NOT a motherboard fluke – it failed on both the ABIT and SOYO.

I can only conclude that the Super ORB could not deliver the goods in this case. Why? I have some ideas but that’s all they are right now – more testing is in order to hopefully pin down a probable cause.

As to the ORB, considering the consistency with which it failed Prime95 while others did not, I think there are better alternatives to consider, as noted above.