SUMMARY: Thermaltake’s more conventional Volcano 6CU+ heatsink could be a cheaper alternative to the ORB. 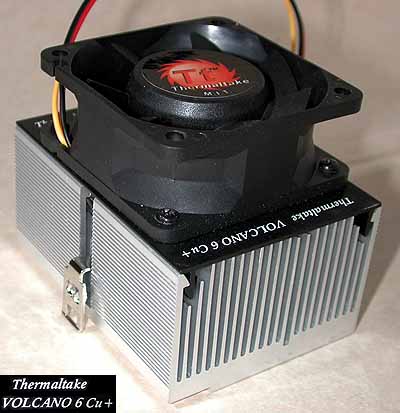 Tony at PHAM Computer was nice enough to send over Thermaltake’s Volcano 6CU+ heatsink. No ORB here – very conventional construction – extruded aluminum body with a copper disc insert in the base: 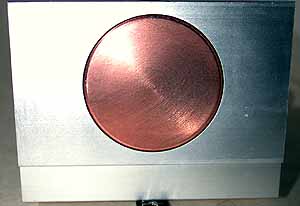 The issue that comes to mind when I see a copper insert like this is the quality of the mating between the copper insert and the aluminum body. The better the fit between the two surfaces, the better performance. QC also becomes important in optimizing the bond.

The base also comes with a thermal pad, which I summarily scraped off. If you’re going to use a heatsink once, you can use the pad. If you plan to move it around – no pad.

The Volcano measures 80 x 60 mm – this is about as large as a heatsink can get and fit within the Socket A “keep safe” area. However, I was going to test this on an MSI K7T Pro2, but quickly found that its capacitors intrude into the safe area and it would not fit on this Socket A board; if you are considering the Volcano, measure the footprint very carefully. It fit the Iwill Socket 370 BD133, but this may be an exception.

The clip is what I call an “OEM” clip – it requires a screwdriver to mount and dismount from the socket. It’s very secure but totally user unfriendly, especially if you are “screwdriver challenged”. Within the tight confines of some cases, this type of clip can be a challenge.

The clip is also “indexed” – you will note, in the topmost picture, that one of the fin slots is cut lower than the others. This clip has two “ears” which ride in this groove so that the heatsink is always mounted exactly the same way every time – you can not move it along the clip’s axis. I think this was done to ensure that the CPU’s center is always located at the center of the copper disc.

The Volcano is topped with an Evercool 38 cfm, 7000 rpm fan that produces 39 dBA – basically a Delta 38 clone. You will see more 38-40 cfm fans coming on the market as a response to the demand for high cfm fans in Socket A heatsinks. In addition, it comes with an adapter so that you can power it using a four pin hard drive connector – some motherboards run the danger of burning out their fan headers due to the high wattage draw (>4 watts).

I prepared the Volcano by boring a hole completely through the base so I could epoxy a thermocouple above the CPU. The thermocouple is attached to an Omega HH23 Digital Thermometer. Ambient temps were measured with a thermocouple placed about 1 inch from the fan’s intake. I used Prime 95 to stress the CPU on an Iwill BD133 (MBM temps are on-die) and Abit KT7. Arctic Silver grease was used in all tests. CPU Case Temp is the temp at that point where the CPU contacts the heatsink, CPU Back Temps are measured by a thermocouple on the center back of the CPU.

The Evercool fan is similar to the Delta 38 screamer (both spin at 7000 rpm) and just as noisy. I measured fan noise with a Radio Shack Sound Meter placed 8″ from the fan’s intake and recorded 70 for the Evercool – same as for the Delta 38.

These C/Ws place the Volcano about mid-range of what I think is acceptable (0.30 or less) for cooling T-Birds and in the same ballpark as the Dragon ORB 3. Most interesting is the effect of smaller die size CPUs – the Duron and PIII are about the same size and the results reflect the tougher cooling challenge. I ran these tests over a three day period and this pattern was consistently evident. This effect is a due to a combination of factors, including not only die size but the spreading resistance of the metals used.

Thermaltake’s Volcano 6CU+ is an OK cooling solution for Socket A CPUs. It’s really designed to be installed once (unless you scrape the thermal pad off), so if you mount/dismount your heatsink often, I don’t see this as an attractive option. However, for around $22, this is a good price/performance buy.

In sum: ORB for looks, Volcano for price/performance.

Thanks again to Tony at PHAM Computer for sending this our way to test out.

In this story, you will learn how the new, but bad Arcticooler did. As you might know, there was a bad batch of them, but I got a good, working cooler. I also tested the Alpha PAL6035 along with it