SUMMARY: Top rank performance for both PIV and Socket A use. 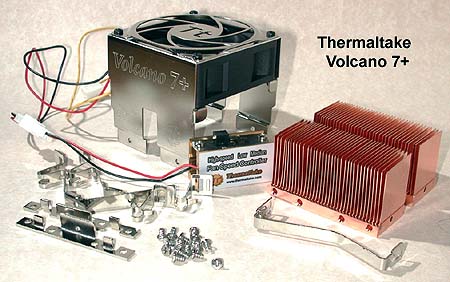 Thermaltake was nice enough to send us a sample of their latest heatsink, the Volcano 7+. This is a very interesting product – it comes with hardware so that you can adapt it for either Socket A or PIV use – sort of a “DIY” heatsink.

For PIV use, the Volcano 7+ 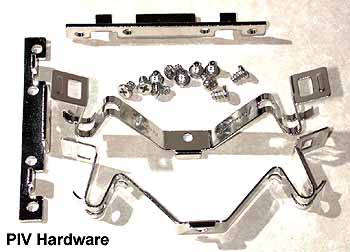 gives you all the hardware necessary. It ships unassembled, so you will be required to screw things together per your needs.

All you need is a phillips head screwdriver – this is not difficult. The instructions are clear enough and there are enough diagrams to walk you through it. 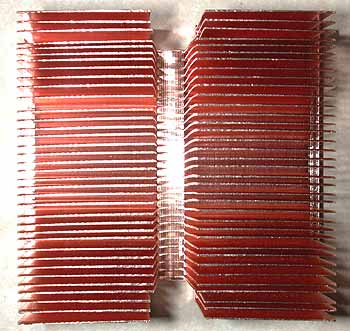 Stripped of its fan shroud, the heart of the Volcano 7+ is 460 grams (about one pound) of copper. This is a 36 fin skived heatsink – a LOT of surface area. For socket A use, some users might balk at hanging this much weight on a single lug; adding in the weight of the fan and its shroud gets you up to 680 grams – about 1½ pounds.

At this weight on a single lug, it won’t take much to shear a lug. This heatsink is NOT suitable if you transport your PC, so Socket A users be warned. I would feel a LOT better if the clip engaged all three lugs, and frankly I’m surprised that Thermaltake opted for a single lug clip (note: If you have a two or three prong clip from another heatsink, it would not hurt to try it out on the Volcano 7+). It also requires a screwdriver to mount on the lug.

The base is 6mm thick 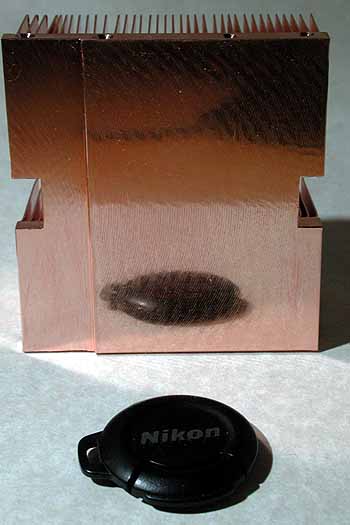 and well finished. The polishing marks you see are not discernible to the touch. I’m going to send it to Hoot for his take on it – he’s a great “base player”.

reveals a bunch of resistors hooked up to each setting. By varying resistance, voltage is dropped to achieve two lower fan speeds. The controller will get warm, not hot, to the touch, especially at the lower setting.

In addition, users should think about how they are going to hook this up. The controller hooks into a four pin power plug, with a separate three pin plug to read out fan speeds in BIOS. If you want to access the switch, you’re will most likely have to run extra wires to lengthen it enough so that you can access the switch outside the case.

In summary, this is a hefty chunk of copper with a variable fan switch and adaptable to PIV or Socket A use – a nice package.

Last, I tested the Volcano 7+ on a Lucky Star PIV motherboard for PIV performance. I have modified a PIV to take direct temperature readings of the CPU case, following Intel’s spec. Also recorded are CPU on-die temps.

Die Simulator results place the Volcano 7+ in the top rank of heatsinks (Heatsink Ranking) at the HI fan setting. At the MED setting, performance is still quite good; at LO, it’s down in the lower ranks, as you might expect. My XP did not like this setting at all, Prime 95 was not stable under stress.

Top Rank performance at the highest fan speed and users can moderate noise (and performance) with three switch settings. However, Socket A mounting might be an issue, and I would advise some caution with single lug mounting.

All told, an impressive package for both Socket A (with caution) and PIV use.

Thanks again to Thermaltake for sending this our way. I urge Thermaltake to rethink the single lug clip.

Last year, I decided that my old computer needed an update. It was a Celeron 400 on an Intel 810 board and was getting quite cumbersome in most of my apps. After a few weeks of research, I found out