SUMMARY: The Volcano II is marginally acceptable for T-Birds up to 1400 MHz but only with a Delta 38 fan.

The Heatsink Factory sent us a Thermaltake Volcano II to test.

For some reason, Thermaltake decided to field a more conventional heatsink called the Volcano II. This is a classic extruded heatsink with 18 fins and a bottom that shows machining marks – pretty conventional stuff. The top is secured on one side only; the other side will flex if you push it. The clip is moderately difficult to install and I believe that using a screwdriver is required. All told, a heatsink built to a price point. 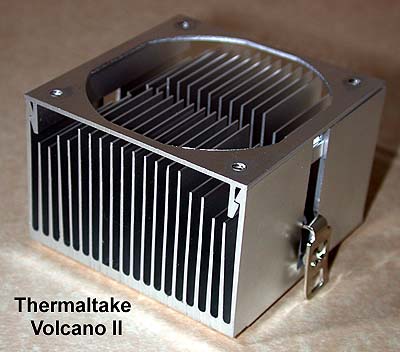 As you’ll see from the test results, the stock fan does not come close to the Delta 38’s performance.

The following test results were on an ABIT KT7, T-Bird 1133 @ 1.9 volts, at various speeds while running Prime 95 to stress the CPU. A 1/16″ hole was drilled into the heatsink’s base and a thermocouple was epoxied into place over the center of the CPU’s core. Ambient temps are measured 1″ from the heatsink fan’s intake. Noise was measured using a Radio Shack sound meter placed 8″ from the fan intake.

The Volcano II with the stock fan is not a serious contender for CPUs over 1000 MHz. It takes a Delta 38 to get the Volcano humming (maybe screaming is better), and as tested it does an acceptable job out to 1425 MHz; it can probably do an OK job to 1500 MHz, but that’s an assumption on my part.

Pushing 90 cfm through the Volcano does not get much more cooling, suggesting that the Volcano is about at its limit with the Delta 38.

The Thermaltake Volcano II just makes the 0.3 C/W cut that I arbitrarily feel is acceptable for serious AMD CPU cooling, but only with the Delta 38; with its stock fan, the Volcano is not acceptable for serious cooling. The best heatsinks, all using Delta 38s, are testing out in the 0.25 range, so the Volcano II is in the hunt. The Swiftech currently remains number one with its MC462A, although its noise level at full speed is high.

If you don’t want to put up with noise, either accept higher CPU temps, go water cooling or wait until a better air cooled solution is available.

Thanks again to the Heatsink Factory for sending the Volcano II our way.

A Thought About Water Cooling