SUMMARY: Could be a fun accessory if they get rid of the buzz. 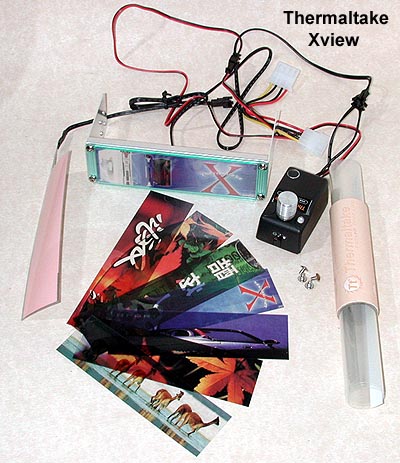 The good guys at Thermaltake were nice enough to send a sample of their Xview. This is an EL (electro luminescent) panel that is powered by a 12 volt plug. There are two panels included – one that fits in a 5¼” drive bay and one “bone” (their word, not mine) – a free standing EL panel. The latter is included for use in Thermaltake’s XaserIII PC case, but with some imagination, it can be used anyplace.

is done through an accessory switch (left above – with a sticky pad) that has three settings:

The first two are obvious – it’s the sound control setting that would make me crazy if this were on my PC.

When you turn the EL on, you hear a buzzing sound¹ – not very loud, but loud enough that on a quiet PC, you’ll hear it. When I first heard it, I thought is sounded familiar, and then it hit me: It sounds like a mosquito buzzing in your ear – constantly. If you moderate it with the Sound Control, when it stops, the EL is off.

This means that if the EL is on, so is the buzz. Now either you like this mosquito buzzing in your ear or you don’t; if you don’t, the EL is off – that is, as you reduce the buzz, the light dims so when the buzz stops, so does the light. If I were to market this product, I would give users the option of turning the buzz off with the EL on – but that’s me.

Included with the Xview are 8 pre-made panels, basically to show what can be done with it. 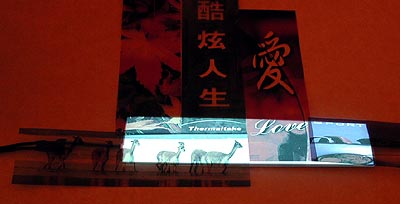 There is a CD which includes about 300 templates, most of which are names and views that I think most would find appropriate for your dad’s PC.

In the product picture above, inside the tube is a sheet of clear plastic (for overheads) upon which you can print any image you wish and cut it to size. The mind staggers with possibilities for images that can be captured with a digital camera and displayed on your PC.

Included with the accompanying CD are instructions for this task using Word – incredibly complex for my taste. I would think using Paint or better still, Photoshop, would be an easier tool.

Without the buzz, of if your PC is loud already with buzzing fans, this can be a neat personalizing accessory. I would be tempted to open up the control box and disable the speaker (or maybe just wrap it in foam) – but that’s me.

¹ Erik Anderson sent this in:

That buzzing you hear isn’t coming from a speaker. A lot electroluminescent devices (like glow wire) produce that sound. It’s coming from the power inverter inside the control box.

The inverter contains a small transformer, I believe for stepping up the
AC voltage to make the light brighter. Normal AC current runs at 60 Hz. You
can sometimes hear a low-pitched hum from large transformers at power
substations. That’s a 60 Hz sound you’re hearing. The changing voltage causes the transformer to vibrate slightly, producing a sound.

The inverters used for things like cold cathodes and EL lights produce AC
current in thousands of Hz. Glow wire glows brighter when the AC signal
oscillates more quickly, and the Xview probably does the same thing. That
buzz you’re hearing is the same thing as transformer hum, just at a higher
pitch.

All in one lapping kit – Brian Berryman

The differences between prices on high-end and low-end Intel chips have never been closer. There’s less room for profit in remarking than ever before. And NOW all of a sudden remarkers crawl out of the woodwork and are all over

The Perils of Repair

Doing 21st Century Voodoo A few days ago, we had a primer on how to build your own computer. As many readers would attest, doing this is likely to make you the “computer expert” in the eyes of family, friends