SUMMARY: Low Melt Alloys as TIMs are strong competitors to “traditional” thermal greases, although with some caveats.

I mentioned earlier that I was taking a look at some LMA (Low Melt Alloy) TIM material, in this instance from TherMax Korea. This material is quite different from the “traditional” thermal grease we’ve seen on the market, in that it is metallic (and conductive) and not oil based. If you think of something akin to mercury, but solid, you get the idea.

Thermal grease manufacturers have added metals to grease mixtures to increase thermal conductivity – a notable example is Arctic Silver. Logically, if you can get rid of the non-metallic carrier and just have a metallic TIM that fills the micro-voids between the heatsink and CPU, you’ll have a superior TIM – nothing like pure metal.

One approach would be to solder the heatsink to the CPU – the drawback is that the melting point of solder will destroy the CPU – not a good move. Hence the Low Melt Alloys – these are alloys that melt at temperatures below those that will kill the CPU; the TherMax Korea HiFlux TIM HF-60110BT starts to flow at 62ºC – TherMax recommends that you run up to 65ºC to ensure melting.

The impact of the TIM joint between the CPU die and the IHS might surprise some readers – the following passage is interesting reading:

“The importance of a TIM is not proportional to its volume in the overall thermal solution. About 40% of the thermal resistance in the overall solution lies in the TIM1 layer between the die and the lid [ie, IHS]:

Many current designs are thermally inferior, exacerbating the problems of designing a feasible back-end (heat sink and fan) thermal solution. Steve Pawlowski, Director of Intel’s Microprocessor Lab stated at a developers’ conference in Taipei recently: ‘There’s a certain [thermal] transfer coefficient between the die and the package. If you can’t come up with a better package that will allow that heat transfer to occur from the die, no matter what you do on the outside, it’s going to be difficult.'”

This of us cooling high watt CPUs know this well enough.

I don’t want readers to get the impression that LMA TIMs are the perfect solution – there are drawbacks, as outlined in this paper, Performance, Reliability, and Approaches Using a Low Melt Alloy as a Thermal Interface Material. The following issues are pertinent:

¹ I ran Arctic Silver over a 24 hour period and numerous temperature cycles. However, Arctic Silver clearly states “Due to the unique shape and sizes of the particles in Arctic Silver 5’s conductive matrix, it will take a up to 200 hours and several thermal cycles to achieve maximum particle to particle thermal conduction and for the heatsink to CPU interface to reach maximum conductivity. … On systems measuring actual internal core temperatures via the CPU’s internal diode, the measured temperature will often drop 2C to 5C over this “break-in” period.” Readers should evaluate test results with this caveat in mind.

The TherMax proved to be significantly better in this test.

After the test runs were completed, I removed the heatsink for the die tester and found this on the heatsink’s base: 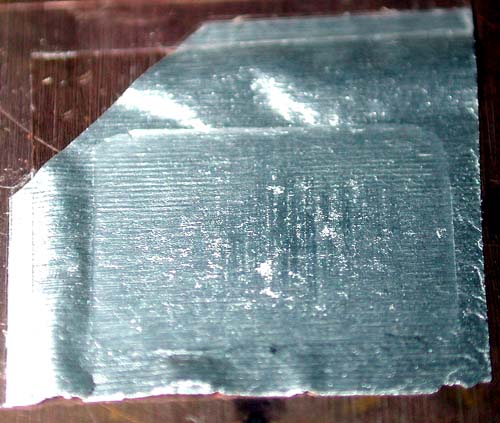 Note that the excess material did not fully adhere to the base:

This is a concern, as this material is conductive – any excess material that might shake loose will not do any good to a motherboard. I lifted the patch and found this:

Even though I ran the die up to 65ºC, it looks like the TherMax did not melt as much as I thought. Even so, the performance was quite good. I decided to re-run the test, this time running the die temp between 65ºC to 75ºC three times to melt the TherMax, with the following results:

After the higher initial thermal cycles, I did get somewhat better results. I also noticed that the contact patch was more defined: 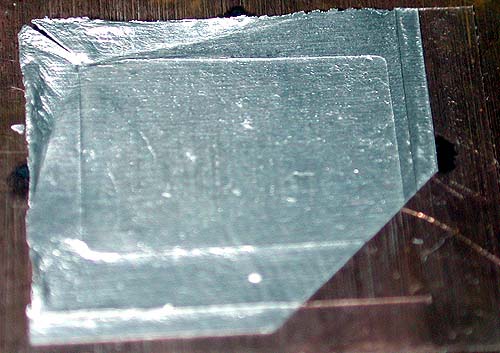 It also appeared that the TherMax was thinner: 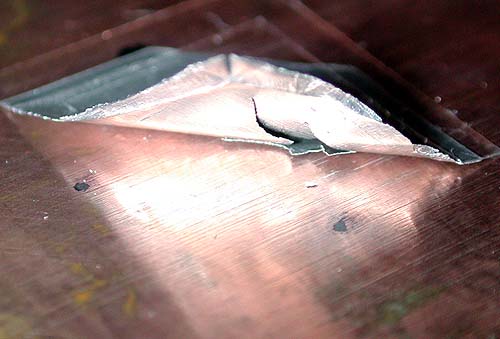 However, it was nowhere near what I achieved using a heat gun – I’m sure temps were well in excess of what I ran on the die tester.

LMAs are an interesting approach to TIMs – the notion of a metallic TIM is compelling. However, the TherMax I tested did not liquify at the temperatures I ran on the die tester. I am not comfortable running any CPU over 65ºC, and considering what I found, I’m not sure I’d be comfortable running the CPU at temps high enough to liquify the TherMax. Even so, the TherMax LMA performed very well.

The one drawback that gives me some pause is its conductivity – any loose material could cause real problems inside a PC or laptop. If I were to use it, I’d cut a piece just the size of the die and install the heatsink over it – very carefully so as not to move it.

Overall, TherMax Korea’s HiFlux TIM HF-60110BT is a very interesting TIM approach with excellent performance, but perhaps not for the “faint of heart”.

I managed to secure additional samples of Thermax’s LMA TIM and send samples to some of our Forum seniors to try out. First results have been encouraging, with some showing high single digit performance gains in cooling.

I decided to further test this TIM on a couple of systems, one being an Asus K8V Deluxe with an AMD Athlon 64 3200+; at spec, it radiates 89 watts.

There is a plastic sticky tape that runs along the border – this is used to hold the TIM onto the heatsink. The problem is that for AMD’s IHS, the plastic tape will sit on the IHS – not good! I cut the plastic tape off the TIM, cleaned the heatsink base and CPU with acetone and placed the TIM on the CPU. I did not burn it in, just ran it in place with Prime 95. The delta (CPU temp minus ambient temp, CPU temp per MBM) I got this way was 22ºC.

Then I ran the heatsink (Tuniq Tower 120) without the fan on till the CPU temp registered 68ºC. Flipped the fan on and the temp dropped to 30ºC for a delta to ambient of 11ºC.

I measured the edge temp of the IHS and found it was 6ºC less than the CPU temp, which means that I probably did not achieve the 65ºC at the case to fully melt the TIM. However, I ran Prime 95 on this system all night and in the morning it was showing a delta of 9ºC, performance that was better than any other grease I tried.

The burn-in is unsettling – I do not like to run anywhere near these temps. According to the manufacturer, you should see the same result if you ran the TIM without burning it in over a period of time – the thermal cycling should do it.

As a second test, my friend Andy used it on his HP PC with a XP 2800, a bare die CPU. Before using the LMA TIM, this PC would run about 45ºC at idle and 55ºC running “normal” apps. The heatsink is a non-descript aluminum OEM unit – nothing fancy – with a 70mm fan.

After installing the TIM, he rebooted; it hung for a minute, and when Windows XP popped up, he saw temps at idle to 30ºC, and “normal” app temps of 45ºC; this is all without burning in the TIM.

We’ll continue to test this material and report back with results – so far, intriguing!


Evolution of a Watercooling System

SUMMARY: Danger Den’s Socket A waterblock mounts about as securely to the motherboard as you can get – a great idea for peltier systems. The good folks at Danger Den were nice enough to send us a sample of two