I’ve finally completed what I
set out to complete 4 months ago, which was improving the design of the
Thermoengine heatsink. I’d like to fill you in on what I’ve done and
what I’d like to do. 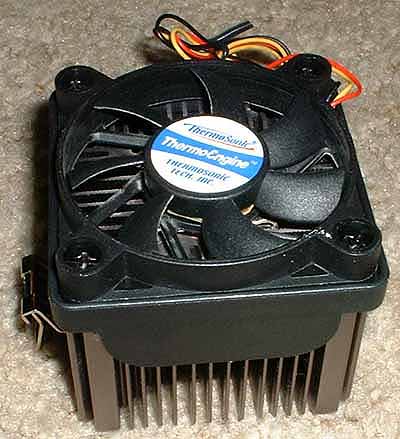 As a mechanical engineering graduate student who enjoys the heat
transfer aspect of computers, I quickly noticed the inherently better
design of the Thermoengine heatsink and wondered if I could improve the
performance of the heatsink by inserting an oxygen-free copper core
that ran the entire length of the heatsink. I decided to contact
Coolerguys and they graciously donated 2 heatsinks for modification
and testing.

I took the Thermoengine heatsink and, using a vertical mill, I bored
a hole through the center of the heatsink. I then lapped and polished
the inside of the hole. The next step was making the copper core which
was done on a lathe. While on the lathe, I was able to lap and polish
the copper core.

We have a student machine shop here at Purdue and I have access to
some of the nicest machining equipment available. You’d be impressed
with what some of our student race teams turn out for parts on the CNC
machines.

The parts were machined for a 0.0025″ interference fit. I didn’t
want to press fit the two together for fear of gouging one surface and
thereby ruining the mating of the parts. I decided to open up some
textbooks and figured that the heatsink bore should expand by 0.004″ of
an inch at 400 degrees F – PERFECT.

I then stuck the part in a toaster
oven (high tech) and then just dropped the copper core into the center
of the heatsink. You can tell by the pictures that the fit is very
nice. 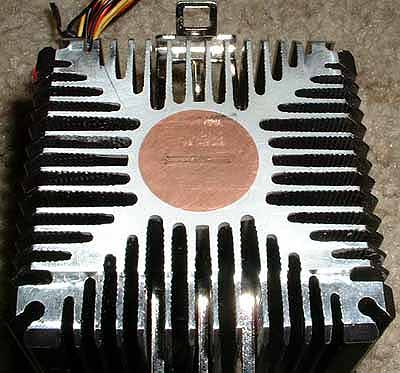 Both ends of the heatsink were machined to make for a uniform
surface and finished by lapping the CPU side of the heatsink. Some
rudimentary testing was performed and it was found that the modified
Thermoengine heatsink performs just as well as a FOP-32, which is
impressive considering the dinky fan.

It was noticed through the first tests that the CPU die doesn’t
directly contact the center of the plug/heatsink, and this was also
noticed during the stock reviews of this heatsink. I wanted to improve
the design of the second heatsink further by moving the copper plug
further to the CPU side of the heatsink and by boring a hole 1″ deep
into the copper plug.

The idea behind the bore in the copper plug was
to get airflow inside the copper plug. I know what you are thinking:
You can’t get airflow in a blind bore. Right you are. The idea was to
bore a couple holes through the outside of the heatsink and into the
cavity of the bore.

By doing this, the difference in air pressure
between the outside of the heatsink and the air pressure inside the
copper core would force airflow down and through the copper core, which
would hopefully improve results further. The implementation of this
design failed miserably.

I tried boring the hole in the heatsink off-center to better mate
with the CPU die, but in doing so the wall thickness was too thin and
when the aluminum cooled, it cracked along the wall. The picture 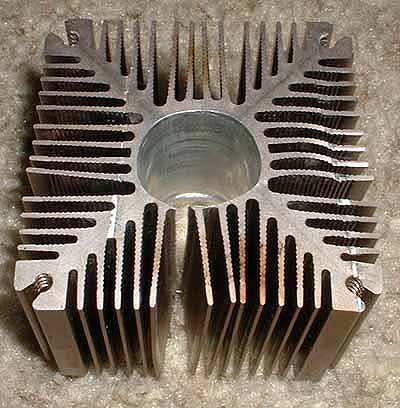 shows
the fully destroyed heatsink, but it wasn’t that bad from the shrink fit.
It was ruined when I removed the copper core, as I didn’t want to remake
that piece as there are several hours invested in it.

In short, I think that this is a successful improvement and I’d like
to implement the improved core design if Coolerguys wouldn’t mind
sending another couple of heatsinks my way.

Thank you very much to Coolerguys for their generosity and
Overclockers.com for posting this work.

Making A Lack A Lock

The people at PCekspert have a rather amazing article about the socket 775 “overclocking lock.” (Please take a moment to take a look at the article. If anybody’s earned extra hits, it’s them.) The secret behind the lock is that Read More

What The World Really Needs

The Meaning of "Good Enough"

In my previous article I claimed that all the blocks I tested were ‘good enough’ and did not require further lapping. After this was published, it occurred to me that I had written a meaningless statement. I had not qualified Read More