About two years ago, I started to think about watercooling and how a system could be better designed for simplicity, low cost and high performance. I had some ideas on how to accomplish these objectives and started to experiment with prototypes. After a number of prototypes, I arrived at a point where I had to devote a LOT more time to this effort.

I decided that to carry this work further, I had to work with someone who would devote substantial time and energy to this project. I spoke with a number of contacts in the industry and quickly found that there was very little interest in researching a new system. Fortunately, I did find one sympathetic soul, Andy Lemont of Millenium Thermal, who while skeptical at first, saw some merit in what I was trying to do and agreed to collaborate with me.

I have to say we went down many roads and blind alleys, trying alternative materials, fluids and system configurations. Along the way as experimental results grew increasingly more promising, we decided to form a company, Innovation Cooling LLC, to formalize our collaboration, file patents and explore commercialization options.

In our quest for simplicity and low cost, we decided that eliminating the pump was a key objective.

Enter the Thermosyphon. What attracted us to thermosyphons is the utter simplicity of it all – a closed system with no pump requiring no maintenance. In addition, the working fluid can be non-conductive and non-toxic, desirable characteristics for any liquid cooling electronics.

A thermosyphon is a phase change system (for a detailed discussion, go HERE) – it cools by changing the liquid in the system into a gas. This is visually seen as boiling – you can see bubbles forming in the boiler (same as a waterblock in waterccoling systems) as the working fluid vaporizes. There is a wide range of materials to enhance boiling – carbon foam looks very interesting (a movie clip HERE).

The following pic shows bubble formation (if you’re interested, you can DOWNLOAD a 5 MB movie) as seen in the red area: 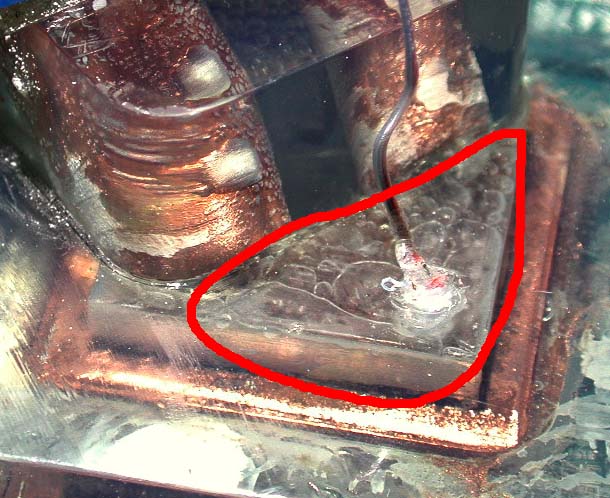 The vapor rises in the system to the condenser (radiator). Air blown through the fins condenses the vapor to liquid, which then flows down through the tubes to the boiler to repeat the cycle. No pump is required – the vaporization and condensation cycle is self sustaining.

The system is under vacuum and totally sealed – similar to a heatpipe, if you were to forcibly open the system, it would be rendered worthless. Once the vacuum is breached, the boiling ceases.

After many twists and turns, the picture above is the working prototype.

We are now at the point where we feel that we have a system which warrants commercialization. Let me say at this point that the test data you will see is ours; in addition, there will be independent tests published by a very large technology company which has assisted us in this effort which substantiate the results we show here. Prior to any product launch, systems will be available for evaluation by competent, independent third paties. 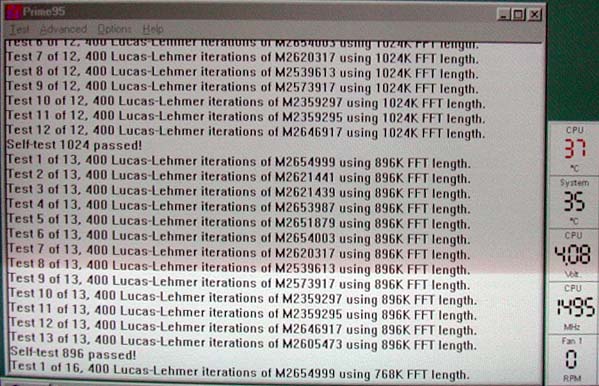 One interesting characteristic we found was that fan speeds make very little difference – in this instance, only a C/W of 0.01 between running the fans at 12 volts and 4.3 volts; at 4.3 volts, there is almost no noise from the fans. I’ve seen this before in heatpipes – an example HERE.

With the thermosyphon, cooling condenses the vapor to liquid (similar to a heatpipe); with water, the task it to dissipate heat from water.

As a further test, I mounted the Thermosyphon on an Asus K8V Deluxe with an AMD Athlon 64 3200+. At spec, it radiates 89 watts. I’m also showing results at idle and under stress at spec and overclocked 10% with Prime 95 using the on-die diode – I can’t attest that the temps are accurate, but the difference between idle, stress and overclocked are interesting: 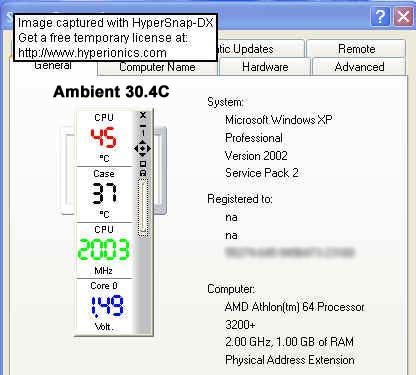 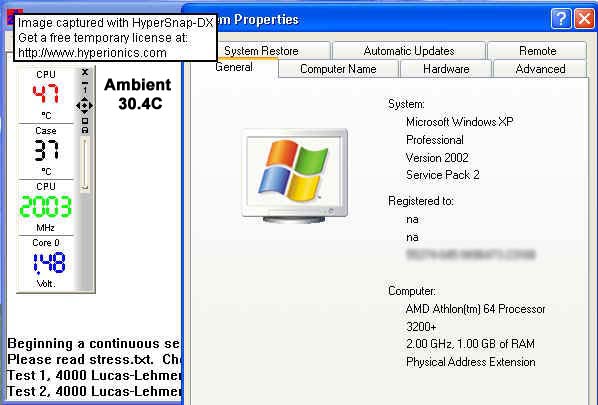 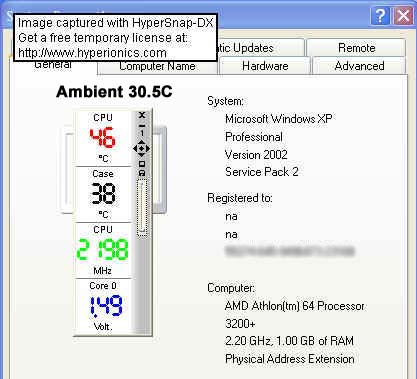 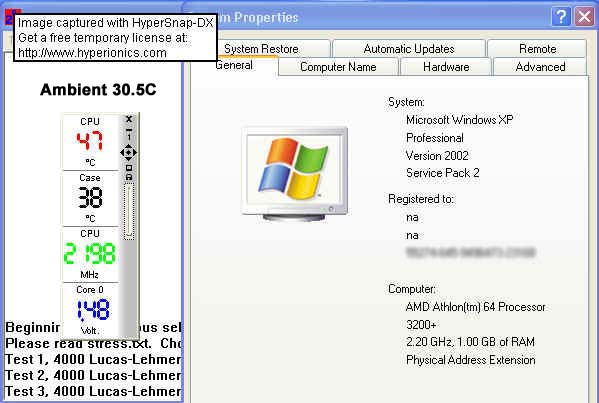 Not much difference between spec and overclocked! With temps at a fairly constant level, thermal stress due to wide temp variations is minimized.

Another characteristic of this thermosyphon is that there is not a large difference between idle and stress temps. While I can’t say that CPU temps are accurate, it does calculate to a C/W of 0.19 at spec and 0.17 overclocked.

The last test I ran was using the die simulator, even though the system is optimized for CPUs with an IHS. This test resulted in a C/W of 0.22 at 100.4 watts – not bad, but with a boiler optimized for small dies, I would expect to see C/Ws around 0.17. Even so, a C/W of 0.22 ranks the thermosyphon in the top rank of watercooling kits tested to date (HERE).

As with heatpipes, thermosysphons must be mounted such that vapor rises up and liquid flows down to the boiler with no bends in the tubing for liquid to pool.

NOTE: While we have not tried it yet, there is no reason why coupling a thermosyphon rated at 300+ watts with a TEC could yield some very interesting results.

For those of you with Xeons, the IWill DP533’s claim to fame has been its 133 MHz forced FSB jumper, which offers a way to overclock Xeons with a 100 MHz FSB. On the other hand, there is another, universal

A growing percentage of people are rejecting “official” sources of information about computer products, relying increasingly instead on user opinions to make their buying decisions. It’s not perfect, but for more than a few aspects, seeking user opinion of products

From a member of our audience. Looks like the corporate folks may have some problems, too: According to what we were told (I’m not saying this is gospel), the select and open licensing versions (of corporate software) will have product