In a stunning move, Steve Jobs gathered the faithful legions of Apple acolytes and introduced Apple’s latest software product iReligion. Jobs stated that this was developed after numerous Apple customers professed undying fealty to Apple’s products and Steve Jobs, pledging not to endure the slings and arrows of PC products and software. 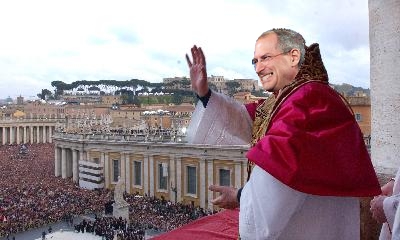 Jobs also revealed that absolution will be available as a download from iTunes.

Apple’s competitors are scrambling to match iReligion, with Microsoft in particular rushing a new version of a Windows OS called Windows Prayers – instead of the dreaded BSOD, Windows Prayers will invoke an image of Bill Gates saying “Pray that this too shall pass.”

Retail pricing unavailable at this time, although rumors on the street have it that selling your soul will be involved.

Is the internet becoming a force for a trans-national virtual government?

I met this old guy in my local supermarket – he was handing out food samples.

I received my iPhone 3G S this AM and found some great free management software for it.