SUMMARY: Interesting fan, but not for aggressive cooling. 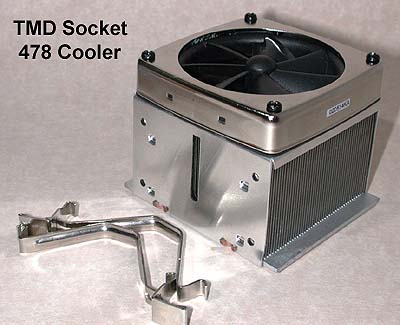 The kind folks at PHAM Computer were nice enough to send a sample of the TMD Socket 478 Cooler (Tip Magnetic Drive). The interesting item about this heatsink is the fan – it’s a hubless design by YS Tech (PD1270153B-2F).

The hubless fan actually was patented over 30 years ago, so the design is not a new one. The airflow pattern of this fan is different, and some heatsinks that were optimized for hub fans may not function as well with the TMD fan. YS Tech claims it

“…increases 30% of airflow and static pressure, but also brings air stream directly to the centralized heat source. As a result, T.M.D. FAN improves the efficiency of heat dissipation at least 15%.”

One of the advantages is somewhat reduced noise; this is because the fan blades and hub are molded into one piece:

Naturally, I couldn’t resist peeking inside: 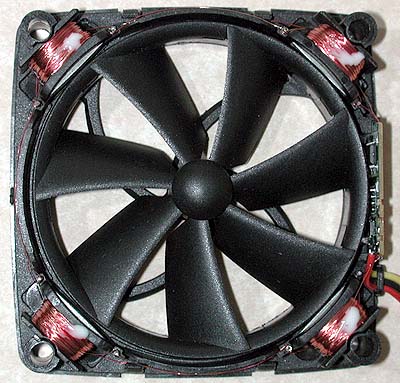 There is a magnet in each corner and a small PCB for the elctronics.

To check out sound, I measured noise using a Radio Shack sound meter placed 8″ from the fan’s intake and recorded 54 dBA; this compares to 69-70 dBA for the Delta 38, so it is fairly quiet. 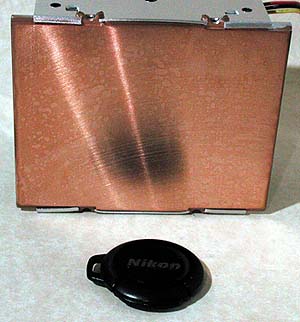 is flat although not polished. The aluminum fins are soldered onto the copper base: 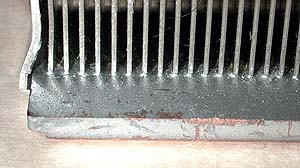 Airflow through the fins was not all that impressive – fairly tame compared to other heatsinks tested.

The clips are pretty standard stuff – metal clips, easy to engage and remove.

In summary, a fairly conventional copper base/aluminum fin heatsink, very secure and easy to use clips and a “new” fan.

The TMD Socket 478 was first tested on the CPU Die Simulator which gives results that are unaffected by motherboard influences. I then tested it on a Lucky Star P4A845D with a modified P4 1500 to read CPU case temps, as an example of what users might see on their systems.

Motherboard results place the TMD in the lower rank of heatsinks (Heatsink Ranking).

Thanks again to PHAM Computer for sending this our way.

I read your article on the ORB mounting, so I thought I would shoot this at ya. A buddy of mine purchased 10 of the Panaflo Orbs from a catalog (don’t remember the name) for 5 bucks a piece. I