When I decided to build an overclocked rig, it was a completely new adventure for me. I had built conventional PCs in the past – 5 to be exact – but had never attempted anything that required modding a case, contemplating airflow patterns or choosing OC specific components and accessories.

I ended up putting a nice system together and kept the technology simple, sticking to a strictly air cooled case with a whole lot of fans. While I was laying out the fans and thinking about air flow, I came up with an idea that will work for anyone adding fans to their case to improve cooling by maintaining room ambient air temperatures throughout the interior of their box. Here’s the problem I had to solve:

I have three 120 fans in the left side panel. The top left hole provides airflow out of the case from the dual CPU area, immediately pulling the warm air from the two CPUfx Core heat sinks out of the box. The other two fans provided direct airflow into the case in the area of the PCI cards and RAM slots. 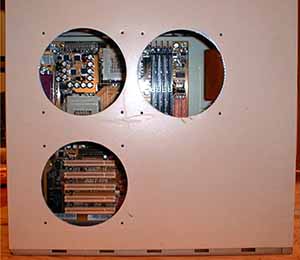 The front 120mm induction fan, if allowed to blow straight through the case front to back, would wreak havoc with the pattern of airflow I wanted to get from the three side panel fans. I figured I had more than enough air induction from the PCI and RAM cooling fans to keep the bottom of the case at or near room ambient temps, so I needed a way to use the air coming into the case from the front fan to it’s best advantage.

Everything I read in preparation for the project indicated that warm air collects in the top of the case and therefore needs to be exhausted at the top. I also figured that having two PSUs in the top of the box would only compound the problem. In addition to the two fans in each of the PSUs, I placed two 80mm fans above the PSUs in the top back of the case, two more in the bottom back, and opted not to cut in blowhole. 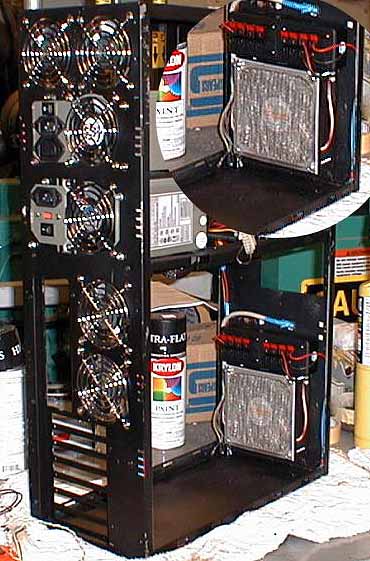 The reason I like this solution so much is just because it’s so dammed simple, didn’t cost a dime, and works extremely well.

I cut a rectangle out of a piece of scrap roof flashing, chucked it in the vice for two opposite 90 degree bends (pounded it over with a rubber mallet), shaped the tail into a gentle curve by pulling it back and forth over a piece of three inch pipe, thereby creating a spoiler that directs the air coming in through the front of the case straight up to the second story. 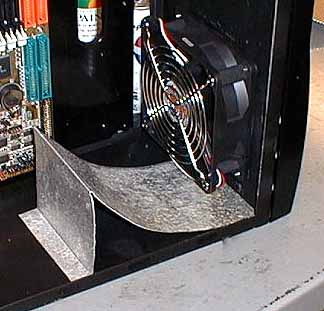 It’s secured by two strips of stickee-back Velcro and easily removable. I have two Compu-Nurse temperature probes positioned in the upper and lower sections of the case and they tell me that I have less than half a degree difference between the two areas. Over all, the case maintains room ambient temps through out the interior. 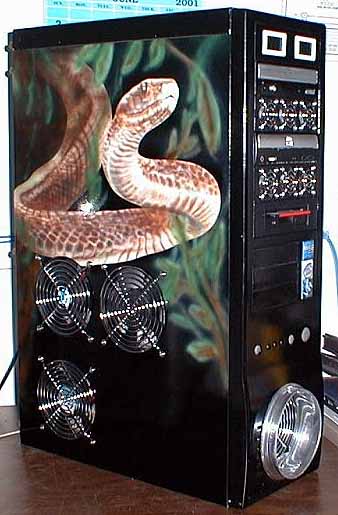 Here’s a shot of my finished rig, The Black Mamba. You can’t see the spoiler, but it’s in there, doing it’s passive best to keep the dual PIII-700s @ 1050 running, at the max, 6 degrees above room ambient temps. They’ve never been above 32C, even when bench marking or playing a DVD movie.

I am a reader of your site for about two years and along the way have learned a great deal on overclocking from your site. I am 34 years old and an engineering tech for an oil navigation electronics firm.