Well, for several months now I have been working to build myself a stable little watercooling system so I could overclock my PC. When I first started, I had no idea what I was doing – I didn’t even know anyone who had done this sort of thing before. I wanted to cool down my computer in the first place because I would let it run for days at a time and the average temperature of 66 C always worried me.

When I learned of the basic principles of watercooling, I sat down and came up with a plan.

My computer setup at the time was an AMD XP 1600+ CPU, with a GeForce 2 MX videocard. The rest of the stats are of no importance because they were not going to be watercooled.

In March of 2002, I first ordered a few parts from www.cool-computers.com. They seemed like a professional company with high quality products, so that is why I picked them. I figured I only needed a CPU waterblock, GPU waterblock and a radiator because the rest I could get from Home Depot.

I considered building these blocks and using a new car oil cooler, but I did not want to risk any leaks on my first attempt at watercooling. When the parts came in the mail, I went to store and got the rest of the parts I needed.

Here is what I started out with:

When I put everything together and just sat it on my desk, it looked like this: 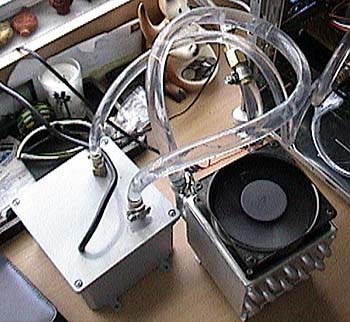 I attached the waterblock to the CPU with the included hold down instead of using the 4-bolt method: 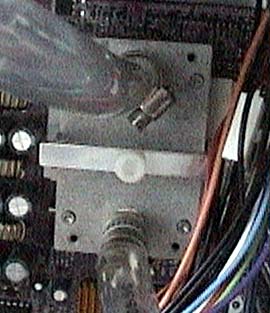 The GPU waterblock was also easily attached using non-conductive spacers and normal nuts and bolts. I was unable to use hose clamps on the GPU block because the barbs were so close together. I found that there was not enough pressure for them to leak so I left them like this:

When I first put the system all together, I knew I had to find a way to have the pump turn on when the computer was turned on. I found a friend who could make me a circuit that would do this, but he said it would take a few days. I figured my computer would be fine, so I just left the pump on a separate power cord for the time being.

I had to turn the on the pump before I started the computer every time I wanted to turn the computer on. I explained to my family that they could not use my computer for the week, and that if they needed to go on the internet, to use one of our other computers (we have 4 in our house).

Tragedy strikes when you least expect it!

I went into my brother’s room and asked if he used my computer. He said he turned it on to use it a few hours before, but forgot about it and watched TV instead. He never turned on the pump!! The computer started without the cooling system and ran until it fried itself.

I lost my Motherboard, CPU, and PSU. I was pissed! When my brother said he would pitch in to pay for half of the new stuff I needed, I wasn’t as mad. I ended up getting the best AMD XP processer (at the time a 2000+), a Gigabyte GA-7DXR+ motherboard, and a 431 watt PSU. With these new parts, I decided I needed to start over.

I took everything apart that night and started coming up with a new setup using the same parts. I knew I wanted more cooling power, automatic power-on, and a fail-safe setup. I spent a few days online researching ways to cool water. I found water chillers for sale, but they were a few hundred dollars or more. I thought about hooking up my room’s A/C vent to my current radiator, but that would look terrible, make my room warmer, and since we don’t always run the A/C it may not cool enough.

Then I got lucky…
{mospagebreak}

A few days down the road, I found an old guy who was giving away a mini-fridge because he was moving out of state. The fridge was an early 80’s cube-style refrigerator with a brown case and a woodgrain door. It was ugly, but the thing could cool the air inside it down to 0 C.

The first thing I did to it was paint the whole thing with a few good coats of satin-black spray paint. The paint was a flat, non-glossy color, so the fridge came out looking like it was black in the first place.

Also while I painted the fridge, I cut a window on the access side of my computer and put a piece of plexi for a window. I even got a huge anime girl Hook-Ups sticker off Ebay for $10 so it wouldn’t looks so boring: 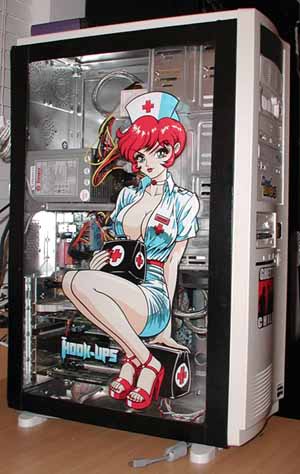 After the fridge was ready to go, I re-built the system basically the same, using the fridge to house the tank with the pump and the radiator. It looked like this inside: 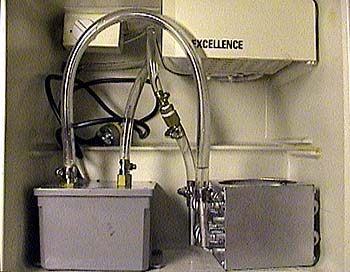 To save space, I wanted to put my tower on top of the fridge. This put the waterblocks in the computer about 2 feet higher than the pump inside the fridge. When I first ran the system, the weak 85 gph pump was not strong enough to push the water up and out of the fridge, and then up even higher to get into the computer.

I needed a new pump fast, so I went on Ebay and got a 380 gph pump with overnight shipping. Here is a pic of how my desk was set up. You can see the height difference in the fridge and the CPU waterblock: 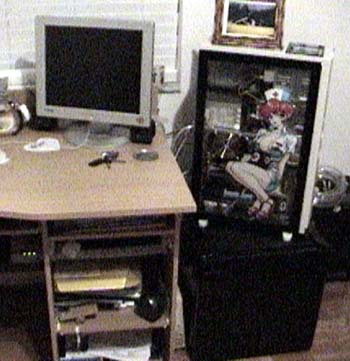 So much for overnight shipping – I didn’t get the pump for a week! During the week while I was waiting, I got a new GeForce 3 TI video card. The old videocard waterblock that I had from my GeForce 2 would not fit because of the hose barb placement.

I made another trip to Home Depot and picked up some compression fittings and copper tubing. I took the old block apart and re-built it. I even put the old heatsink back on top of the block for additional cooling. I don’t know if this would even help, but it looked pretty cool so I did it: 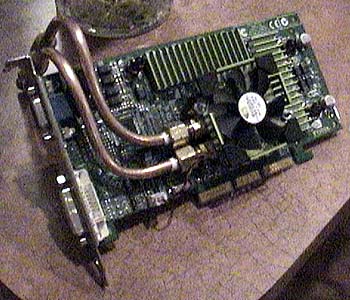 When the new pump finally came, I swapped it out for the old one in the holding tank. This pump was more than strong enough to push the water all the way around the system. I hooked up the GeForce 3 to the system as well, and the internal connections looked like this: 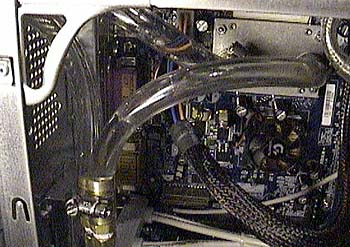 The first time I ran the computer with the new cooling system, I was getting temperatures of 30 C at full load. I am sorry I can’t post any benchmark screen shots – I never thought to take any!

At this point I decided it was time to overclock my computer.

I got an AMD XP unlocking kit off the net and I downloaded the tools that let you overclock GeForce cards. Running the computer at about 1.9 GHz and with an increased GPU speed, the computer did get a little warmer, but my watercooling system always kept it stable and in the temperature range I wanted. I kept the computer like this for a few weeks, but then I wanted to do even more.

But before I did any more cooling work to my computer, I thought it would be cool to do a visual mod of some sort. I decided to make a top window on my DVD drive. I took the time and cut a nice 3-piece window out of the top of the drive case and put plexi over it, and then cut a large rectangle window out of the top of my computer case. It came out looking like this: 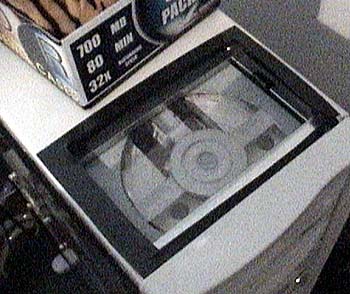 Now it was time for more performance work.
{mospagebreak}

How could I cool my computer even more without spending much more money? I figured a good way would be to install another radiator. I didn’t want to spend money on a radiator, so I built one out of some extra parts I found around my garage.

What I had to work with was a small electrical box and a metal lid for it, some brass hose barbs and elbows, some extra heatsinks and a fan. I took the heatsinks and attached two to the inside surface of the metal lid and put another larger one on the outside surface. Then I hooked up the hose barbs to the opening on either side of the electrical box.

The fan was attached to the outside heatsink and my radiator was complete! Water passes though one side and transfers heat to the internal heatsinks. These heatsinks transfer the heat though the metal cover to the outside heatsink. The fan on this heatsink takes the cold refrigerated air and uses it to disperse the heat, thus cooling the water in the radiator. Here is how it looks: 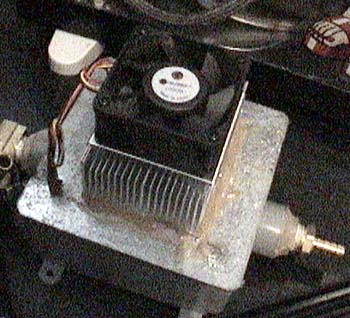 I also wanted to make my other radiator more efficient. To do this, I took an old PSU case and gutted it. I then sealed every opening except for where the fan would normally go. I put a fan in here and then drilled a 5″ hole in the top of the PSU case.

I put this under the radiator and then put a 120 mm fan on top. Now air is sucked in by the top fan, pushed though the radiator, then the modified PSU case sucks the air and pushes it back out into the fridge to be cooled again: 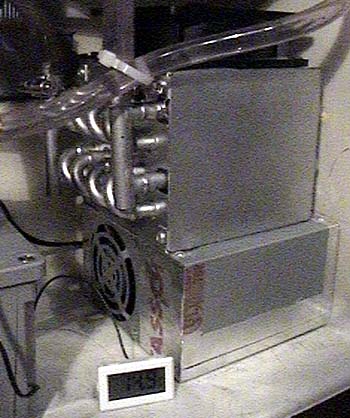 Now with two fan-cooled radiators in my fridge, I was getting much lower temperatures.

I set up the 2nd radiator to be on a bypass valve thingy so I could use 1 or 2 radiators, depending on how heavy a load the computer was running. I usually leave both open for additional cooling, so this valve setup is not of much use anymore. By the way, on the picture below I only wrote 24C on the white box to represent my in-line thermometer. My temps range from 20 to 30 C on average when running at full load. Now the system is setup like this:

With the current setup pictured above, the fridge was starting to get pretty cramped. As you can see, I drilled two large holes in the ice-box door and put fans over it to pull air though the ice box and into the rest of the fridge. The ice-box part of the fridge is in the top right corner with the two fans on the door: 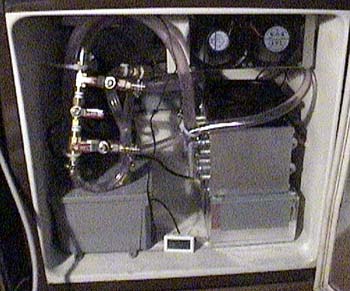 Here is a shot of the freezer compartment with the fans on the door. Before the temps in the fridge would get up to almost 30 C if the computer ran for more than a day. With these two fans to circulate the cold air, I never see fridge temps above 20 C: 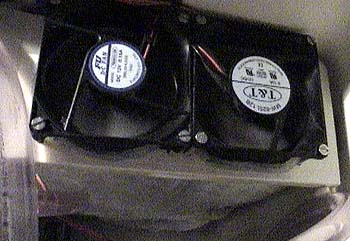 I still have several future plans for the system, because I know I can cool my computer much more! If anyone has any ideas for me please feel free to email me.

Go HERE if you’d like to see more photos.

UPDATE 1/21/02: Cusil Thermal Conductivity Mr. Toshi Oyama, Ph.D. R&D Manager, WESGO Metals recently informed me “that the thermal conductivity of Cusil was calculated from Electrical conductivity, which is reasonable since both are controlled by free electrons in metals. However,