SUMMARY: Probably the first of many 80 mm “fandapter” heatsinks. The stock fan does not cut it for Socket A, but a Panaflo gets it into acceptable territory. 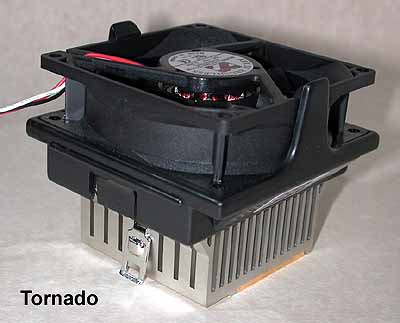 Well what have we here? A 60mm on steroids? No – it’s an 80mm fan on what looks like a 60mm heatsink (at least compared to some other 80mm socket heatsinks). This is from Winink Corp, another newcomer to the heatsink scene.

The Tornado features a Socket A/370 heatsink footprint at the base and uses the kind of clip we all love – engages one lug of the socket and requires a screwdriver to place on/off. At the top is the “fandapter” for the 80mm fan.

Note that this does not have a taper – it has no real depth and is literally just an adapter. The fan is held in place by the two plastic uprights – the fan snaps into place. You may have to wiggle it a bit to do this, as the fit is snug. 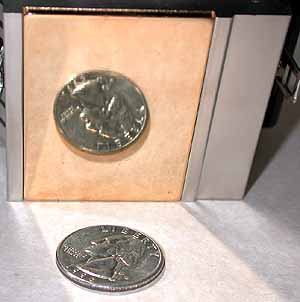 The base is gold plated copper – very pretty but really unnecessary. The base is very smooth – no machining marks of any kind. Hopefully consumers who purchase this unit will see the same base. 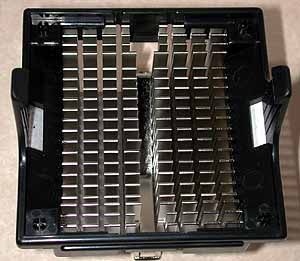 As you look down into it, you can see lots of fins – good airflow through the heatsink. The fan snaps into the plastic top – no screws; this makes changing the fan a snap.

There is one problem, however:

It is impossible to mount this heatsink with the fan in place.

So, what you have to do is remove the fan, mount the heatsink on the socket, and then snap the fan into place. Easy enough to do, except that it makes me wonder if all this snapping and wiggling into place can potentially damage the CPU’s core. I did it at least a dozen times without a problem, but be warned what’s required.

I prepared the Tornado by boring a hole completely through the base so I could epoxy a thermocouple above the CPU. The thermocouple is attached to an Omega HH23 Digital Thermometer. Ambient temps were measured with a thermocouple placed about 1 inch from the fan’s intake. I used Prime 95 to stress the CPU on an Iwill KK266, BD133 (MBM temps are on-die) and Abit KT7. Arctic Silver grease was used in all tests. CPU Case Temp is the temp at that point where the CPU contacts the heatsink, CPU Back Temps are measured by a thermocouple on the center back of the CPU.

The stock fan (ARX) was pretty wimpy – very quiet (55 dBA, 2900 rpm) but its performance was barely acceptable for aggressive Socket A cooling. I tried a few different 80mms and found the Panaflo FBA08A12H (61 dBA, 3000 rpm) a much better performer at noise about at the YS Tech level. The best performer was the Sanyo Denki 109P0812A201 (4600 rpm, 66 dBA) at the expense of higher noise and for a minimal gain (about 1C – remember diminishing returns?), so I elected used the Panaflo in all tests.

Substituting an 80mm fan for a 60mm is not as simple as looking at equal cfms. For a rough approximation to determine equivalency between a 60mm and 80mm fan, use the following formula can:

The increased performance with the Panaflo amounts to a 5C difference for a 100 watt CPU – a nice gain. However, there are limits – the Sanyo is a more powerful but yields very little gain for the extra noise. Also note that with all this horsepower, the Tornado comes in at about 0.25 C/W – more aggressive 80mms do not propel it into the top ranks.

A fan’s cfm rating is only part of the story – the fan’s performance curve must be matched to the heatsink’s system resistance for optimal performance. You may go through a few fans before finding the best one; if you don’t have some lying around, it could be an expensive experiment.

Optimizing performance is a complex balance of each fan’s operating parameters and heatsink characteristics. We will do some more on this topic in future articles.

I have my watercooling system for more than two months now. The detailed description of this system can be seen in an article titled “Simple Watercooling System”. Briefly, it is an open (no-pressure) system with two waterblocks, for CPU and

UPDATE 6/24/00 In our 6/18 review of Tidal Pool’s innovative waterblocks, we found great performance for an aluminum block due to its superior design. This block used straight 1/4″ nipples which are not usually amenable to socket 370 mounting. Ed

I use a similar method to adhere a cpu to a waterblock/heatsink that is not permanent. I apply thermal compound as normal and a small amount of Type 150 silicon on each corner of the cpu. The cpu is placed