Today, we get to check out the VX500 SSD from OCZ. This drive is designed for mainstream PC’s and Laptops, balancing performance speed and features with a focus on write endurance using MCL Nand technology. Toshiba acquired OCZ in early 2014, and they continue to work as an independent subsidiary but have been using Toshiba internal components. But, enough chatter, lets have a look at some data.

The specifications and features below come directly from the OCZ.com. While this drive isn’t NVMe, it is a SATA III, keeping its compatibility very broad across most platforms.

Above we see the specs of the VX500 series overall, below is a table containing more specific information for your reading pleasure.

The tables above not only highlight some of the great features but also show the difference between models within the specific series. The 512GB model not only surpasses the 128GB and 256GB in terms of performance, it’s arguably the best bang for your buck. In comparison to the 1TB(1024GB) model, performance gains are barely seen, and it consumes less than half of the power. That may not mean much but efficiency is clearly incredible and I could see where this drive installed in a mobile platform instead of a mechanical HDD would really pay off. Additionally, the drive comes bundled with cloning software to easily transfer your data. The other thing that should be pointed out here is the AMAZING 5 year warranty. After the technical support team contacts you, if they deem your product as defective, they will issue a PRE-PAID return shipping label, and a brand new replacement will be shipped out to you, next day. More information on the warranty can be found here. Now lets move on to the physical product.

Here we get to see the iconic Toshiba blue packaging. On the top of the packaging, we see the drive and have the manufacturer and series in white. Around the edges we see the rated transfer speed and the series again.

On the back side we see some of the key points listed above and a few others.

The SSD itself has a simplistic dot-matrix style stippling on an aluminum body, again we see the OCZ sticker and series.

With the case removed, we see where the magic pixies live that is our data.

And finally, Here is the OCZ-provided SSD utility. Within the software, we get an overview where we can view the drives capacity and allocations, a firmware check, how it is interfaced and what mode we are using it in. Any alerts we need to be informed of, and the overall health and temperature of the drive. I decided to run this as just an overall view, like most users would. We see that it does match the data given from the above test, within a few percent. You can download the software on the OCZ website.

Each SSD is Secure Erased (SE) using the OCZ SSD Guru utility to make sure we get the best results possible. We do this before each and every test run to give the comparison samples the best environment possible for testing. Below are the tests we run with a brief description.

CDM is run at its standard settings. The beauty of this benchmark is that the data is nearly in-compressible. This makes these tests more like a real-world situation instead of attempting to maximize throughput for a spec sheet. Let’s take a look at Read speeds first:

The VX500 puts up some good numbers, falling just behind the OCZ Triton 150 in both seq and 512K speeds, falling to the back of the pack in the 4K read bench, but right back into contention in the QD32 4K read speed. 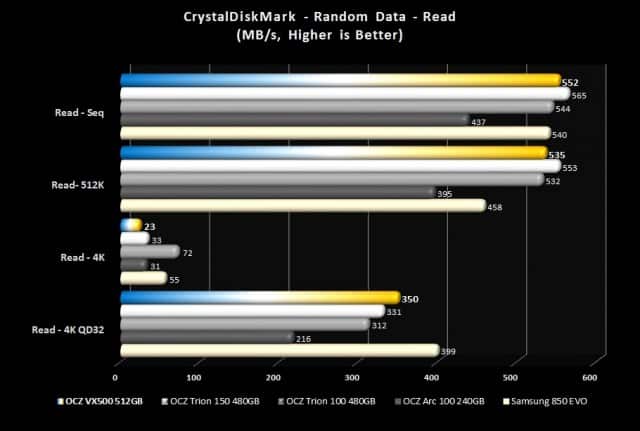 In Write speed tests, we see a somewhat similar story, just behind the Trion 150 in both seq and 512K. Hitting middle of the pack in 4K write speeds and following up with the slowest 4k QD32 speed of the small pack. 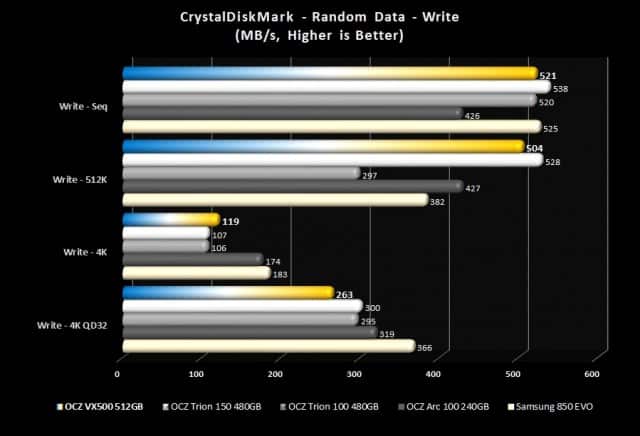 Moving on to AS SSD, this tests in-compressible data and showcases a worst case scenario.

Read speeds tell the same story as CDM, A marginal second in Seq read speed, falling behind in the 4K, and just behind the 850 EVO in the 4K-64Thrd. 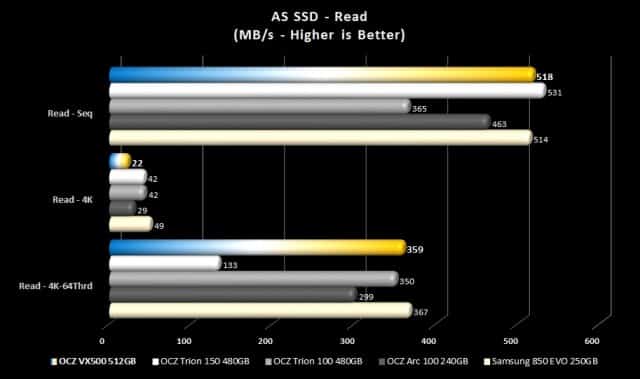 Again, Write speeds tell us something similar, and we begin to see consistent results. Sequential, 4K, and 4K 64Thrd write speeds all land in the middle of the pack. 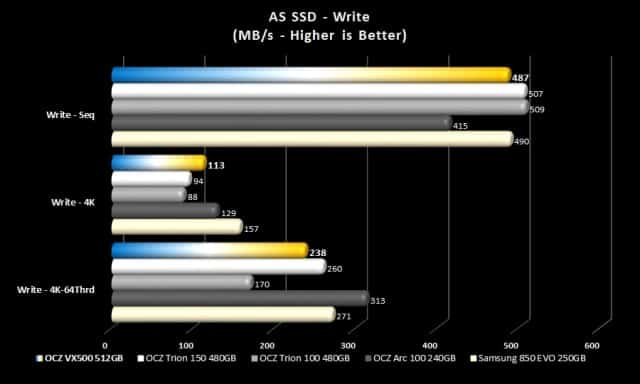 Access times were great, with the Write access time two one hundreths (.002) of a second faster than the 850 Evo. The read access speed were a different story and was nearly double the rest of the tested drives. That being said, this drive does not feel slower. 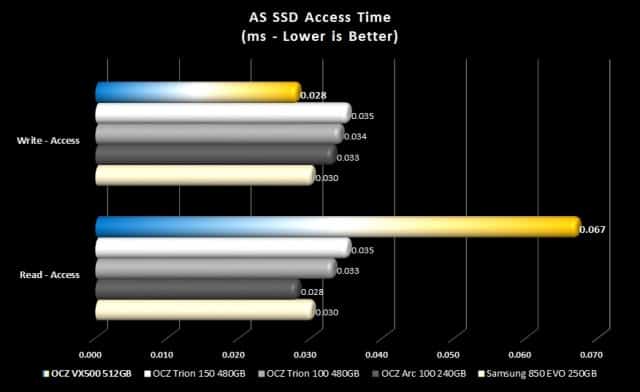 Once again, we see the drive landing right in the middle of the pack overall, even with the Read access times. 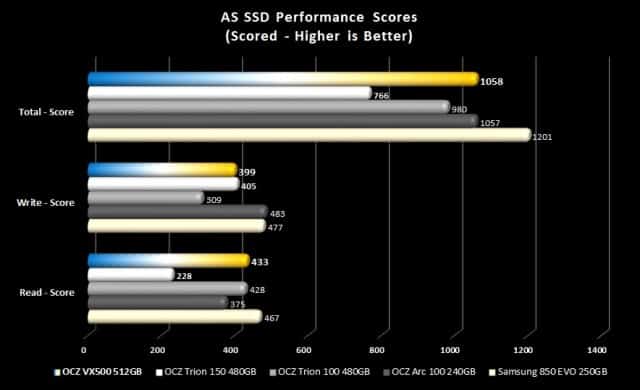 ATTO Disk Benchmark is typically used by manufacturers to showcase their drive specs as it uses highly compressible data in a sequential test much like AS SSD does. That being said, we see how the drive performs over a longer time. We see that the consistency came back and the drive held the same numbers for most of the benchmark. Between the Writes and Reads, we see a very stable performance. keeping up with other drives, and holding its own in the 4k write and read by leading the pack in that file size. 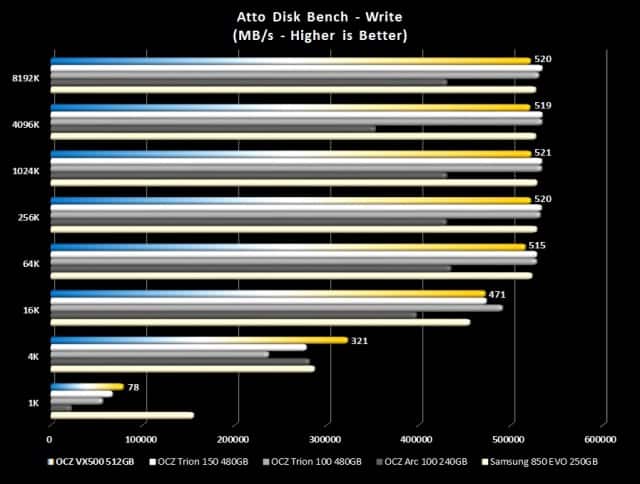 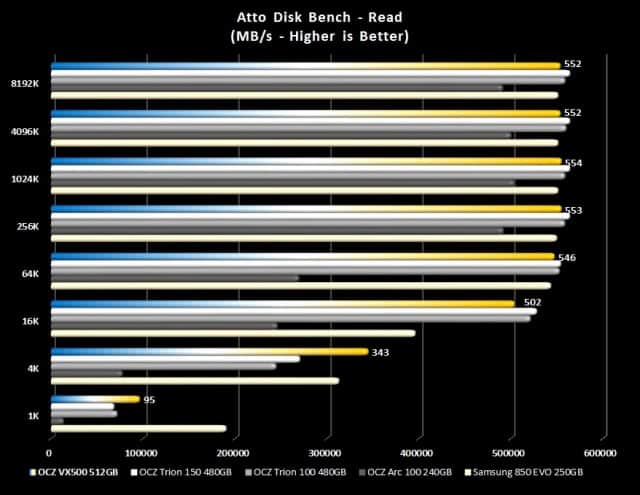 Anvil Storage utilities is a tool used to assess the write and read performance of your SSD or HDD. It gives a detailed look into how the drive performs over different file sizes and ultimately provides a score at the end. Overall you will see that it does compare with the rest of the benchmarks in this review.

Overall, the latest from Toshiba and OCZ in the VX500 performs very well. We saw great performance in reads across many of the tests and writes were, in most cases, much faster than the others from Toshiba and steadily knocking on the door of the Samsung. In the end, the drive landed just about where we expected, fast and competes well with many other drives. Where the OCZ drive sets itself apart from the rest is the 5-Year OCZ Advanced Warranty. While other manufacturers offer the same length of warranty of five years, OCZ goes a step further offering advanced replacement with free shipping going above and beyond the rest. With a very competitive price of $154.99 from Newegg, you really cant go wrong.

We stopped in to see the ever-expanding product line at Kingston and HyperX. On display were many new products like mobile storage, SSDs and HyperX’s first gaming peripherals.

Today we are looking at another drive towards the high-end of the performance spectrum in the ADATA XPG SX8200 Pro. The SX8200 Pro is updated with the new, faster, Silicon Motion controller allowing for speeds up to 3500 MB/s reads and writes up to 3000 MB/s, SLC caching and DRAM cache buffer, and LDPC ECC technology all backed by a 5-Year warranty.

Today, we get to check out the VX500 SSD from OCZ. This drive is designed for mainstream PC's and Laptops, balancing performance speed and features with a focus on write endurance using MCL Nand technology. Toshiba acquired OCZ in early 2014, and they continue to work as an independent subsidiary but have been using Toshiba internal components. But, enough chatter, lets have a look at some data.