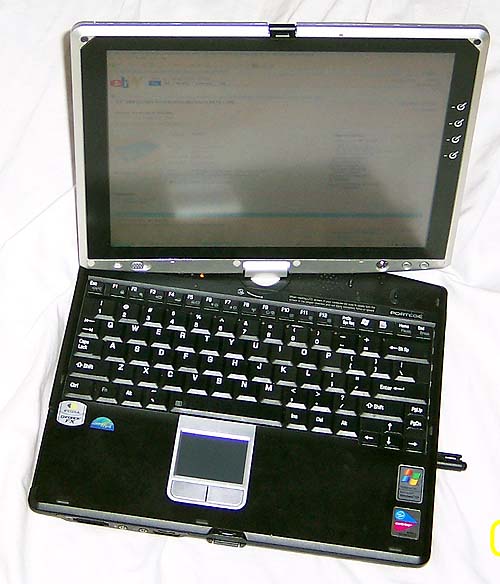 I deal with laptops day in and day out with what I do. I buy, refurbish and resell laptops around the New York City area, so I get my paws on a lot of stuff. I take notes on everything I get, so in case I get anything similar I have something to go on as to what they should be like, and also for pricing.

I am a member of the forums (Lionsault_100) I have been dealing with these machines like this for approximately 3 years, so I know almost every model in some way (especially Dell, IBM, and Toshiba).
The laptop I have at the moment (and will be reviewing) is the Toshiba Protégé M200 Tablet Notebook PC. This is a great little machine which I acquired from a guy that had to pay the rent + bills and needed fast cash – I won’t go into what I paid, but it was a good deal.

These are the specs as I got it (and as it is by default):

This is a great machine that I decided to keep for myself because it was light, fast, and the tablet feature was just too cool: 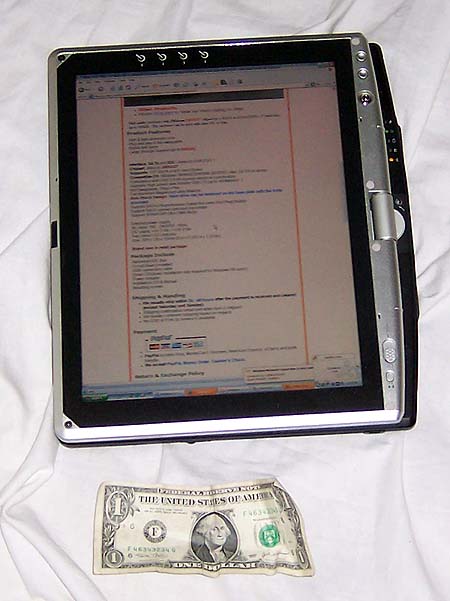 Here are my thoughts on its key elements:

Simply great! You can adjust the screen brightness, but when using the internet and playing music, the battery lasts around 2½ hours. I purchased 3 extra batteries, so I hardly ever have to plug in!

The material this is made out of is top notch. Toshiba has a bad name for generally spotty products, especially on the Satellite and Satellite Pro lines. Of particular note, the AC adapter jack tends to break or lose contact with the rest of the motherboard.

But from what I can tell, they really put a lot into the Protégé line – the material does not feel as if it will break in my hand and since it’s a tablet laptop, it has a nice grainy surface over the screen, so it would take the sword of truth to scratch it. But the quality of the ThinkPad T series as a whole is just a bit better.

I being a guy in his prime with perfect close range vision, a 12.1″ SXGA display at 1400 x 1050 is simply stunning, and the screen is VERY bright. However, it is not a good option for someone older that may have trouble reading the smaller text on this screen. As stated in the build quality section, it would be very hard to accidentally scratch the screen.

The keyboard feels almost like a full-sized keyboard, which is amazing on a smaller laptop, and the buttons don’t feel like they are going to pop off as they do on some of the newer Dell Inspirons I have seen. The engineers also did a great job on the touchpad, though it feels just a tad small, but this is just nitpicking.
{mospagebreak}

The laptop is fast – you can’t debate that since it’s sporting a 1.8 GHz Dothan. I loaded it with 2 x 512 MB PC2700 which also helped matters, so overall performance is, of course, top notch and boot time is fast. The Graphics card is only a Geforce 5200FX, so this definitely is NOT a gaming laptop; however, gaming is possible and it runs UNREAL TOURNAMENT 2004 on medium settings great (one day I will get around to benchmarking this).

This is somewhere this laptop really lacks. Hard drive removal and memory replacement is very easy, but things get complicated very quickly.

The fact that the laptop does not have any internal media drives is a MAJOR downfall. This downfall is understandable to keep the machine light, and I do know that there is a docking station (that will allow for a DVD BURNER, or any media drive) for this which sells for $350 on Toshiba’s website, which is ridiculous and makes a reformat VERY difficult.

What I have to do is pull the hard drive completely, connect it to my desktop via a laptop hard drive USB enclosure, format the drive, copy the contents of my Windows XP CD, put the hard drive back in, boot the tablet from a USB floppy and then run ‘ntsetup’ from the hard drive in DOS.

This can prove to be a real pain in the neck – I have to go through this production every time, as booting from a regular USB DVD drive is not supported.

The laptop is amazing and scores a 9/10, as it comes down to the fact that it’s sturdy, light, fast, and converts into a tablet which is VERY nice.

If this had either an internal DVD drive or bootable USB drive options, I would give it the 10/10. And the tablet features are GREAT – sitting back and just writing out whatever page you want to visit just doesn’t get old! Also, being able to stand up and use the machine makes it really great.

What The 3000+ Tells Us Oddly enough, what may be the most valuable piece of information about these 512K cache Athlon 64 3000+ chips are not the chips themselves, but their price. Up to now, AMD’s policy has been to Read More

Don’t know if this has been mentioned yet, just wanted to point this out as we just found it out the hard way. So before you break down your entire setup: As you know, the first samples of the Abit Read More

Someone at Intel muttered something about integrating graphics into the CPU core someday. Is this something to get wound up about now? Is this the basis for those AMD/ATI rumors? Well, no, but it does indicate something important somewhere down Read More