SUMMARY: Another entry into the all-copper heatsink derby; the TRIG Copper performs quite well for its size. 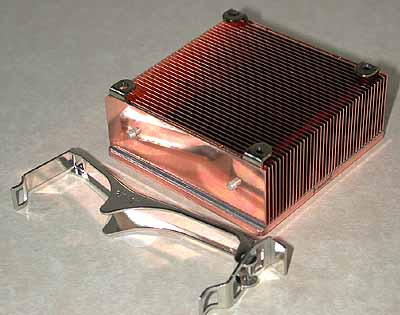 The good folks at TRIG sent us a sample of their latest heatsink, an all copper model called the T501. This is another version using thin copper sheets for fins – a means to maximize surface area within the confines of the socket’s footprint. There are 38 fins measuring 25/32″ x 2 11/32″ long – this gives a total surface area of about 139 square inches, almost one square foot. 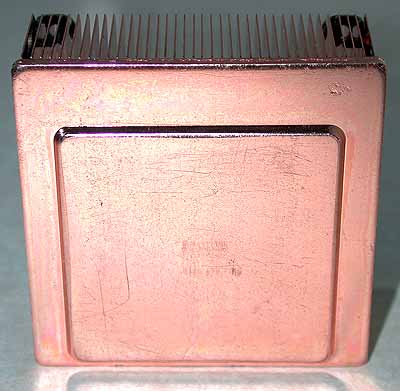 The fan is mounted on four threaded pads that are raised 3/32″ above the fins – this mitigates fan noise to a limited extent. The base is 5/32″ thick copper and the fins appear to be soldered to the base.

The air flow through the heatsink is quite good. The clip is also very easy to engage and remove the heatsink from the socket’s lugs and is a strong point – too many heatsinks use clips that are difficult to engage and almost impossible to release once on the socket. This one requires no tools and is easy to manipulate with your fingers.

I prepared the Trig by boring a hole through the base so I could epoxy a thermocouple above the CPU. The thermocouple is attached to an Omega HH23 Digital Thermometer. Ambient temps were measured with a thermocouple placed about 1 inch from the fan’s intake. I used Prime 95 to stress the CPU on an Iwill KK266, running a T-Bird 1133 @ 1330 (82.7 watts). I also tested the TRIG on a static test block of 50.9 watts. Noise levels were measured with a Radio Shack Sound Meter placed 8 inches above the fan’s intake. Arctic Silver grease was used in all tests.

The 90 cfm fan is from a hair dryer motor and fan is included to indicate how close it is to “maximum” performance. In this case, it looks like the TRIG’s performance could benefit from a fan with higher pressure – the more air flow through the fins, the better cooling performance.

The static block test shows the TRIG about somewhat worse than on the Iwill; I think the difference is due to the airflow through the fins which cools the capacitors and power chips near the socket, positively impacting secondary heatpath cooling.

The TRIG T501 is a credible performer with the 31 cfm fan and competitive with other heatsinks with the 40 cfm unit. A more aggressive fan with higher static pressure could propel this unit into a very strong position, but at the expense of increased noise levels.

Currently this unit is not available in the USA – TRIG is looking for distribution, so if interested contact Raymond King at TRIG for pricing and availability.

I bought my first Pentium II / III motherboard eight months ago. I decided to go for a Celeron 466 PPGA processor mainly for it’s affordable price. I wanted to do some overclocking, but found out that the 466 could