The following test results were on an ABIT KT7, Duron 800 @ 1000, 52.6 watts, running Prime95 to stress the CPU. The test was run such that the motherboard was always as warm. A hole was drilled into the base and a thermocouple was epoxied into place. Ambient temps are measured 1″ from the heatsink fan’s intake. 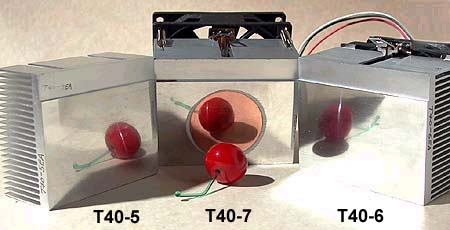 MBM = Motherboard Monitor; this is most likely what users will see using the fan combinations listed.

I think the conclusion I come to is that the T40-7 with both the 70mm and Delta 38 fans are preferred options; The 70 mm gives slightly better performance than the YS Tech with less noise and the Delta 38 for best performance. The 80 mm fan does not deliver performance, most likely due to the overhang over the sides of the heatsink. Using a shroud to funnel air into the center of the heatsink may make this a more viable option.

The Extreme test uses a 90 cfm fan and illustrates that any fan must be of a high pressure type; airflow through the heatsink is not as high as it could be, probably due to the fin spacing and height. Performance is clearly enhanced when airflow in increased.

However, noise considerations are very important to users and noise levels at the Delta 38 level are objectionable.

Both clips are fairly easy to mount the heatsink, although I think the clip which engages two lugs on each side is preferred.

I got a few comments about yesterday’s article, most particular this quote from a linked article: “For example, a hypothetical desktop processor using 70 watts will run an AMD bulk silicon processor with about 40 million transistors. Our 64-bit desktop

Just What Do You Do With All This Space?

Among other things, I’m looking for some new hard drives. I’m particularly looking at the Western Digital drives with 8Mb cache. There’s only one problem: What am I going to do with all that space? (OK, I can buy the