SUMMARY: Three interesting heatsinks from a new manufacturer, one of which is a standout performer (not on the US market yet).

I was contacted by TRIG to test out some products they are thinking of introducing into the US market. TRIG is a company which has been around since 1983 supplying products into the OEM market. The heatsinks I received came with the usual puny 60 x 10 mm fan, which I did include for testing but I also used the Papst 33 cfm unit as well; performance increased markedly.

The trio includes the T40-1, 3 and 4. The 3 incorporates a copper disc in its base. I was not impressed with this unit; I could see thermal grease was used in mounting the copper disc to the aluminum base and I feel this indicates a less than perfect mating between the two surfaces. The T40-1 and 3 measure 60 x 64 x 36 high; the T40-4 is a longer version of the 1, measuring 74 mm long. 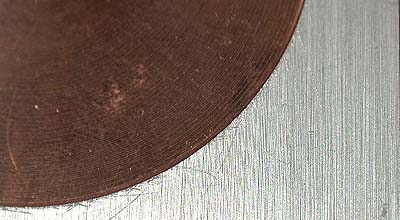 The base finish was on the rough side, as the pic above shows. I did not lap these heatsinks to improve performance, testing them on an as-is basis.

I prepared each one by boring a hole through the base so I could epoxy a thermocouple above the CPU. The thermocouple is attached to an Omega HH23 Digital Thermometer. Ambient temps were measured with a thermocouple placed about 1 inch from the fan’s intake. I used Prime 95 to stress the CPU on an ABIT KT7, running a Duron 800 @ 850 (46.8 watts). The Duron is actually a more severe test as its area is less than the T-Bird, so there is a higher watt loading by area. Arctic Silver grease was used in all tests.

Of the three, the larger T40-4 intrigued me and I tested it with the Duron running 1000 MHz. Performance was not bad! I was somewhat surprised, but in comparing the T40-4 to some other heatsinks, I noted that it is not a lightweight after all; I am doing a Socket A roundup and it compares favorably to other more familiar names.

TRIG has some potential, but if they wish to make an entry into the overclocking market, their line needs more work. As OEM products, these heatsinks are OK performers for spec cooling. At a minimum, provisioning these products with a fan in the 25 cfm range would increase performance nicely without excessive noise.