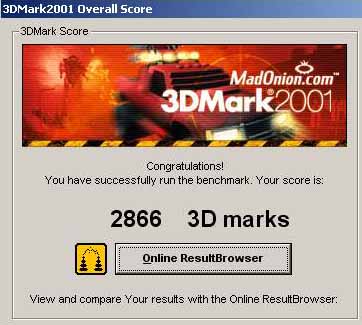 Let me take a little time at the start to explain my thoughts on the nForce.

I knew from the time it was first announced I would get one, especially when I heard Asus was going to be making a motherboard based on the chipset. The hard part was waiting 8 months for the Asus board to appear, but that has been my only complaint and not a big surprise considering it is a first generation chipset from a first time (second if you count the XBox) chipset maker.

So about the first of the year, when internet resellers finally got the board in stock, I paid $221 and had one of the first A7N266-E’s available. It has been the model of stability, without any crashes except those attributable to overclocking too high.

The integrated sound is fantastic – I have it connected to a home stereo amplifier and real stereo speakers, so crackling and pops would be rather annoying and instantly detectable.

As numerous benchmarks point out, it has performance on par with similarly configured KT266A motherboards. The only flaw in the design of the chipset – the integrated video.

While capable of playing all the current games without any noticeable stuttering, it’s the one area to target for improvement. So I spent some spare time seeking to tweak the integrated video up a notch and wanted to let other nForce owners in on the secrets of how to do it.

Since the memory to supply the GPU is the same as system RAM, tweaking the system RAM is the first step.

Having bought Crucial DDR, I set it to the highest (CAS2 Turbo) without any problems. The Asus also has an option for “Internal Graphic Overclocking” which is rumored to increase the effective AGP speed from 66MHz to 100MHz for the internal video.

It seems to have no negative effects, so mine is enabled. A note on Asus nForce boards: The 1001C BIOS actually hurts video performance, so 1001B is my recommendation until they release more BIOS’s.

The GF2MX video cards are limited 2.7GB/s of memory bandwidth (128bitX166MHz DDR, or 64bitX166MHz DDR). So my assumption is that the integrated GPU of the nForce is limited in the same way, since the GPU is a GF2MX (2 pipelines vs. 4 pipelines in a full GF2).

So even with twinbank, at 133MHz, the GPU is probably limited to 2.1GB/s, which is fine since that will allocate all the available memory bandwidth between the GPU and CPU with neither one suffering from starvation.

So to increase the memory bandwidth to the GPU, we increase the FSB/memory speed. (Side note: the Asus nForce boards are unique in that the FSB and PCI/AGP speeds are completely independent, so the PCI/AGP stay in spec, 33MHz/66MHz, regardless of FSB. )

At first, 148MHz was the highest completely stable FSB, but recently 150MHz has become stable also. The chipset itself could go higher, but my locked XP and Crucial RAM are preventing me. 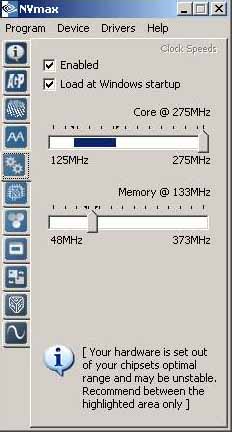 While reading a review of an nForce board, I saw that the author had used NVMax to adjust the core speed. And so step three was born. But first I should mention that which nForce board you have could make a big difference when doing this, as the Asus nForce boards have a HSF on the IGP (northbridge) but the MSI has simply a heatsink.

If you plan on running your GPU, on the MSI board, way out of specs for an extended period of time, I highly suggest removing the heatsink and installing a HSF. Doing so should increase the life of the IGP and allow you to achieve better results.

So after I downloaded NVMax, I started in small 20MHz increase and ran benches to see if performance would increase. Sure enough, I got a small jump in scores with each increase. The original NVMax I downloaded only allowed me to take the core up to 275MHz (from 175MHz). But even at 275MHz, there were no problems with the computer or video. And the 3DMark2001 scores increased from 2650 to 2841, almost 200 points!

A couple days later, I found a newer version of NVMax and it would allow me to take the GPU higher. However, 300MHz was way too much for the GPU and instantly caused lots of artifacts, even just websurfing. Even 280MHz caused problems with strange lines and blocks appearing when running 3DMark2001.

Needless to say, though, I was thrilled with an OC of over 50% and the resulting increase in performance. The integrated GPU even scored better than a stock GF2MX card.

Well, I was 2 points from having the highest score for an nForce motherboard using the integrated video.

I search everywhere for a updated driver pack from nVidia with no luck – not even leaked drivers on MSI’s site. I finally decided to download the 27.50 drivers and just see if they would install.

I unzipped them into a temp dir, went into Device Manager and ran the Update Driver Wizard. I pointed Win 2000 to the temp dir and it found an unadvertised driver for the nForce integrated GPU. Reboot, everything is working fine. Run bench, and the score increased again to 2866. Mission Accomplished. I now had the highest score again. 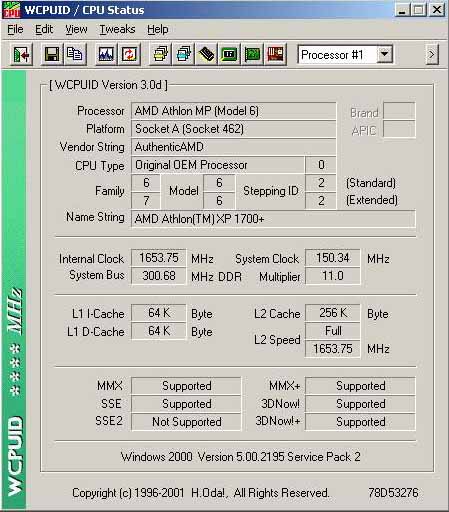 As you can see, increasing the FSB netted more than half the gains in 3DMark2001. With an unlocked CPU and some Corsair PC2700, I am confident I could hit 3000, but budgetary constraints prevent me from doing that at the moment.

Good luck to any nForce owners who try this. If anyone has any further suggestions, feel free to let me know.

Today, Biostar announced the new B550MH motherboard. A mid-ranged mATX board marketed towards buisnesses and casual users. Here is the official press release.