Heatsink Factory was nice enough to send Alpha’s production version of this heatsink; the version I had tested earlier was a prototype. The problem I had with it was that the springs were not strong enough to fully hold the base against the CPU. The interim fix was to add extra flat washers to increase spring tension.

Alpha fixed the problem and the spring assembly now holds the heatsink firmly in place. There are two types of washers to affix the standoffs to the motherboard. The shoulder washer is used for those boards with large holes and the flat washers for those with small holes (Iwill’s KK266 has small holes).

This is important! If you use the shoulder washers with the small holes, it can lift the heatsink’s base off the CPU – a no-no. 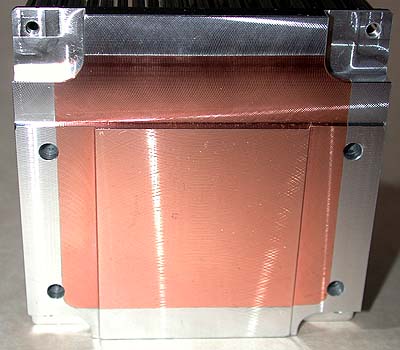 The base is essentially the same except that there are additional cutouts along two sides to the base. I think this was done to ensure that there would be no possibility of the standoffs contacting the heatsink and lifting it off the CPU. 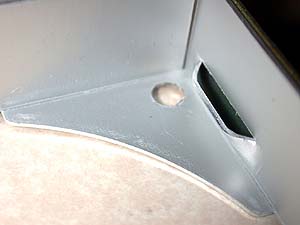 The last change is a good one – now the top skirt has a cutout to lift the skirt above the fins; the prototype used four small standoffs that were a pain to set in place. Nice change – makes assembly much easier.

Performance is the same, so see results below. All told, Alpha came through and made the changes necessary to make it a viable product.

Thanks again to Heatsink Factory for sending an off-the-shelf version to check out. 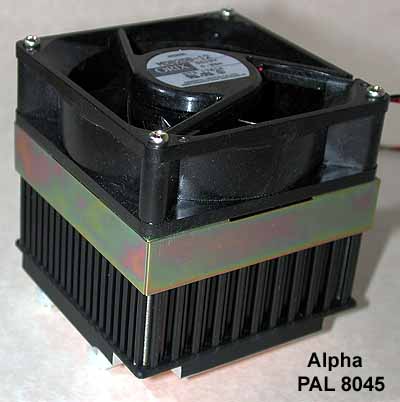 The good guys at Alpha have been doing their competitive homework. Anyone who looks at closely at this heatsink will experience dejá vu. Alpha ships the 8045 with an 80×25 mm, 3800 rpm ORIX fan rated at 35 cfm; the fan blows away from the heatsink base. The shroud serves to silence the fan (spacers lift the fan off the pins) and to concentrate airflow towards the base.

This is typical Alpha construction – a forest of forged hexagonal pins – 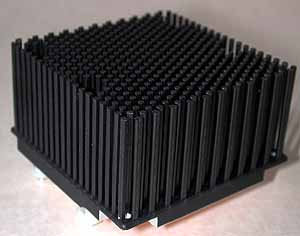 and an aluminum base with a copper insert: 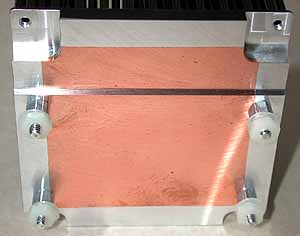 If you look very closely at the aluminum/copper joint, you will see no gaps – I am guessing that it is some kind of metallic “shrink fit”.

Jeff Evans, one of our Forum Senior Members, emailed this: “Nope. Complex forgings such as hex pin fin heatsinks require multiple “steps” in the forging process. Such forgings might see 3 or more dies before they see machine work. More than likely, a copper plate is inserted in the final die along with the partial forging. This literally presses the pieces together till they stick. Shrink fitting is more suitable for round materials, as the shrink pattern is spherical.

Attempting to shrink fit a thin square plate into a heatsink base would most likely result in personal injury when the copper flies out. The copper will fly out because the aluminum is shrinking so much faster than the copper and there is very little area on the side of the plate to hold it in place. Also, shrink fitting the heatsink onto the plate would definitely leave some air under the plate.” Thanks Jeff! 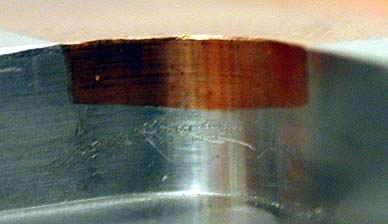 You MUST remove the motherboard to mount the Alpha. As this pic shows 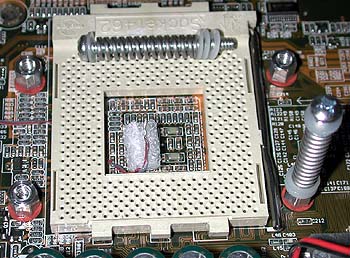 The wire in the socket is a thermocouple used to measure CPU back temps.

the standoffs are bolted into the four holes around the heatsink. The spring loaded screw compresses against the heatsink base to hold it against the CPU with the right amount of force. The four threaded standoffs are secured to the motherboard with nylon nuts (avoiding shorts). With the fan off, four spring-loaded screws are tightened (slowly, crosswise pattern) to hold it in place.

This is where I encountered a problem – as I ran the first test, I noticed good performance but very high CPU back temps relative to the front – not right. I stopped the test and found that the spring force was not enough to fully compress the four pads on the T-Bird, so the heatsink was not fully on the CPU core.

After some back and forth with Alpha, they found that the springs were not compressing as much as they thought; the fix was to add two more washers to each spring’s bolt (increasing pressure). The results shown below reflect this fix, and, when Alpha releases this to retail, I’m sure the spring tension will be correct.

I prepared the Alpha by boring a hole completely through the base so I could epoxy a thermocouple above the CPU. The thermocouple is attached to an Omega HH23 Digital Thermometer. Ambient temps were measured with a thermocouple placed about 1 inch from the fan’s intake. I used Prime 95 to stress the CPU on an Iwill KK266+ and Abit KT7. Arctic Silver grease was used in all tests. CPU Case Temp is the temp at that point where the CPU contacts the heatsink, CPU Back Temps are measured by a thermocouple on the center back of the CPU.

Measuring ambient air temp into the heatsinks that blow away from the heatsink’s base are inherently more difficult to measure. The technique is to measure air temps at each side and average them. When a heatsink pulls air off the motherboard, local hotspots (e.g., capacitors, proximity to a hot power supply) play a very large role.

If you use a heatsink like this, make sure that you have lots of air circulation around the heatsink to avoid local hot spots. In evaluating the results, I would use the BLOWING IN results to be on the safe side.

Very good performance at very tolerable noise levels. The ORIX does not have any high pitched bearing noise as do most of the high speed 60mm fans. If you’re willing to tolerate a tad less performance, orienting the fan to blow INTO the heatsink yields even lower noise.

For better performance, higher speed fans like the Sanyo can notch it up a bit, although at the expense of higher noise levels.

The Alpha 8045 is an excellent low noise/high performance heatsink. Power users might consider a very aggressive fan with a rheostat as one way to “dial in” noise.

This is a prototype – Alpha expects production units to ship in September.

Thanks again to Alpha for sending this our way – another quality product.

SUMMARY: Finally! Someone develops a heatsink with a foolproof mounting system – and it performs with the best! The Swiftech MC370-0A gets my vote for the best all-around air cooled heatsink. Having mounted a fair share of heatsinks, I can’t