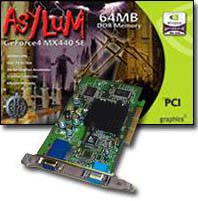 For those of you that are not too familiar with this card, here are some specs:

My system consists of:

Right out of the box with VSync turned off, 43.00 drivers, 16 bpp and some other settings (which I will get to later), this card scored of 3937 using GL Excess. I personally prefer GL Excess over other 3D benchmarks, so throughout the review that is what I will use for results.

After running the first benchmark, I reset my computer and then overclocked, using the GeForce Tweak Utility which can be found at Guru3d.com. I overclocked to 300/383, an increase of 50 MHz for both the RAM and Core speed. After running GL Excess one more time, I then scored 4160. Just so you don’t have to do the math, that’s already a 223 point increase. Also be sure to keep in mind this is with the stock cooling, which is just a reasonable heatsink on the core.

I then decided it was time to add some cooling. I tried a few different setups which are covered below. After getting the cooling setup, I overclocked the card to 375/425 – these were the highest speeds which I could possibly go. If I went 1 more MHz faster on both, I would end up getting lots of artifacts and soon it would crash.

These speeds gave me a high score of 5304 using GL Excess. When comparing results with this benchmark, GeForce 4 TI4200’s were scoring around 7000. When it came down to actual gaming, once I was all done overclocking I was able to get a constant 60 to 100 FPS in Counter-Strike. It depended on how many people were on the screen and things of that sort. With 5-6 guys on the screen, it would maybe drop to 70 FPS or around that range.

First off for Tuning/Setting the card, I would recommend downloading the 43.00 drivers which can be found at Guru3d.com, along with lots of other cool things. Also, download the GeForce Tweak Utility which can be found by clicking on downloads, then videocard utilities and then Overclocking and Tweaking is highly reccommended. Once you have done this, read below. For those of you that don’t get what I mean by the left box/rectangle in the following, please check the pic at the end of the Tuning/Setting guide.

Basic Tweaking: Right click on your desktop and click properties. Then click the settings tab, then click the advanced tab. Then click the tab which says “GeForce 4 MX440”, or another name if you have a different card and are just reading this to figure out how to overclock similar cards. If you have the 43.00 drivers, a small screen with a list of settings on the left should pop up. You then want to set the following settings as follows:

Performance & Quality Settings: Click on “Perfornace & Quality settings which should be listed on the small box/rectangle to the left. Three bars should then appear. Set the first bar all the way to the right. It should then say “Performance” under your slider. Move the slider on the second bar to the second setting to the right, which is 1 notch/setting right of the setting “Application”. For the third bar, slide the slider all the way to the left and it should then say “Off” under it. After that be sure to uncheck “texture sharpening”.

Direct 3D Settings: Click the plus sign next to “Performance & Quality Settings”. Then click on “Direct 3D Settings” in the left box/rectagle towards the left. On the right, there should be a setting called “Mipmap Detail Level.” Click on the rectangle to the right of it and then click on “Best Performance”. Where it says “PCI Texture Memory Size”, change that number to your choice. I personally use 75MB. Then click “apply”

Refresh Rate: Click on “Refresh Rate” in the left box/rectangle. Then click on the dot which says “Override refresh rates”. Then scroll down and find the resolution you use (for me its 800×600). Then to the right of your resolution where it says “default”, click on “default” and then scroll down and click the refresh rate you want to use (I use/used 120 Hz). Then click “apply”

Open GL Settings: Click on “Open Gl Settings” in the left box/rectangle. On the screen to the right, make sure the boxes for the settings “Disable support for enhanced CPU instruction sets” and “Enable conformant OpenGL texture clamp behavior” are unchecked. Then make “Default Color Depth (for textures):” “always use 16bpp”. Change “Buffer-Flipping Mode:” into “Use blocktransfer”.

A BIG, BIG KEY THING is now to make the setting for “Verticle Sync” “ALWAYS OFF”. Where it says “Use up to # MB of memory for textures in PCI mode”, you choose what you want # to be. I have mine at 16. Then click on “apply”, click on “ok” – then you can exit the settings screen. 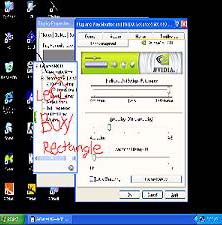 First, I recommend downloading GeForce Tweak Utility from Guru3d.com. because that is the program I am going to explain how to use for overclocking. Once you install the program, open it and click on the tab which says “NV clock”. Then check the box which says “Allow Overclocking” and “Apply settings at startup”. Then a screen will come up click “OK”. It will then do its little program restart thing etc.

Once the program opens, back up click on “NV clock” again and then change your settings to how you want them. I recommend 5 MHz at a time, even though that isn’t what I do being as impatient as I am. Once you put in your settings/speed, you want click “Apply Clock Settings.” The screen will then flash black for a few seconds, then go back to normal. Then click on the tab wich says “OpenGL”.

Check the following things: Force multitexturing, Level of texture detail (and set the bar to -1.0), maximum number of frame buffers (enable vsync must be UNCHECKED to check this). Then change the bar setting to the right to 3, Buffer Region Extention and the three things below it, and the last two things on the page. Then click on the “Direct 3D” tab.

Once done, check the following things (also these are the only things that need/are supposed to be checked): MipMap detail (LOD) – adjust the bar to 3.0, enable user mipmaps, level of antistrophy and set the bar to bilinear. Enable z-buffer compression, enable z-occlusion, maxium number of frame buffers – change the bar to 4, and the last 3 settings on the page.

Once done, click on the “system” tab. On the top left it will say “Bits Per Pixel” – change that to “16”, then scroll all the way down to the bottom and check the setting “Enable256Burst”. Once done, click “send to tray” which is at the bottom left of the program. Another way to set some of these settings and others (which make it slower and makes your stuff look UGLY) is to just click fastsettings, which is at the bottom right of the program.

First, I used the stock heatsink and a 60mm 5500 RPM Antec fan. This seemed to work quite well, but I thought I needed more cooling, especially for the RAM.

Second, I bought two Vantec Iceberg cooling kits. These kits come with 2 heatsinks of different sizes, one fan which is basically a heatsink with fan built into it (similar to the Crystal Orb), a 3-4pin adapter, 2 nylon clips, 3 pieces of thermal tape and thermal compound. All that for $8 – you can’t beat it. You can get these kits at newegg.com or a generic version at your local computer store (compusa,etc). I have one of the Vantec ones and 2 of the generic verisons. They are both equally as good.

I then took 2 pieces of thermal tape and cut it up into four pieces. Once in half, then take the four pieces and cut them in half again, giving you 8 pieces. I then took those 8 rectangles of thermal tape I had and put that on the RAM. Then using a toothpick on the small area around the tape on the memory that I had left, I applied thermal compound.

Once that was completed, I stuck on the four heatsinks – one heatsink per 2 pieces of memory. I then took off the old heatsink, wiped off the GPU and applied thermal compound to the GPU. Using the pins that came with the video card, I put one of the Vantec Iceberg fans on the GPU. Then on the other side of the video card (the flat side if you will, or the top side when it is installed in your computer), I applied thermal compound around where the GPU is.

If you look closely, you will see a square pattern – that’s where it goes. Then I pushed the pins holding the other other fan in and stuck the other fan where I had just recently applied thermal compound. Basically what this is doing is sandwiching the GPU. With this cooling, I was able to reach the max of 375/425.

Third, I removed the Vantec Iceberg fan that was on the GPU (the fat part) and put an Antec heatsink + 60mm 5500 RPM fam used for an AMD Athlon 2100+ CPU. I connected this to the GPU by first cleaning the GPU off with rubbing alcohol – the thermal tape will not stick if there is thermal compound on the GPU.

Then I applied a piece of thermal tape to the GPU and then stuck on the heatsink + fan. It just so happened it fell off after installing it into my computer, so to get it to stick, I put a small dot of superglue in the middle of the GPU then stuck the heatsink + fan on again and it stayed.

This cooling method seemed to be no better than using the small Vantec Iceberg fan – at least I seemed to get no performance gain. If I overclocked the GPU any higher, I would still get artifacts.

Overall, if you are on a budget and are looking for a decent PCI card, I would recommend this card, especially if you are just planning on running basic games. SA stated in Counter-Strike my FPS was decent but not the best you could possibly get.

You can easily cool this card inexpensively. I spent $16 for two of the Vantec Iceberg cooling kits which can be found at newegg.com under VGA and chipset cooling, or at your local computer store (compusa, altex, etc). With a little bit of time and money (for cooling), this card can run very well.

Another alternative would be a GeForce 2MX 200 overclocked, which can do what this card does right out of the box (at least with the GL Excess benchmark). If you have any trouble understanding some of this (which I’m sure some people will), or just have questions etc, pls email me.

If you follow the GPU reviewing world, you have probably seen several articles pop up regarding a new GPU testing method using a tool called FCAT. Our editing team has discussed this extensively and we believe we’ve come to the right decision, but are of course willing to listen to our readers. Please have a look at this article, weigh the options and chime in with your two cents.

I received my spanking new XFX 5870 from Newegg.com. I really don’t have vendor preference and as these cards are in high demand you have to take what you can get. The only issue with the stock XFX card and most other brands for that matter is the BIOS clock limits set by the manufacturer. This article describes how I changed this to overclock it.