I CANNOT BE HELD RESPONSIBLE FOR ANY DAMAGE OR HARM DONE TO PERSONS OR EQUIPMENT! THINK BEFORE YOU ACT, AND ACT SENSIBLY!

Old computers – they’re next to worthless, but being a tight bastard not willing to buy proper fans, I’m going to use the fan from an old computer’s Power Supply Unit (PSU) to cool my hot rig’s case. I’m going to break open two PSUs and install a front fan which sucks coolness into the case, and a fan in the rear that blows out the hot air.

My computer’s case has a detachable side panel, which allows for easy access to the computer’s innards but also is an excellent location for a fan, because there’s lots of space, it’s easy to work with, and of course, cutting a hole in the side panel means I won’t have to take all the stuff out of the case.

I’m going to attach long wires to the fan so the side panel can still come off easily. But first things first – we need to get us a fan.

Make sure the PSU you’re going to use has been unplugged for at least 24 hours so the large capacitors inside have had the chance to discharge. In addition, you can attach a fan to it, making sure the PSU switch (if it has one) is on.

Screw open the PSU and cut the fan’s wires. Now screw the fan from the cover. I recommend you take your time to remove the dust from the fan now that you have it in your hands anyway. On to the power part.

A fan is an electrical device and as such needs power. So how do we give it that? It depends on your motherboard. If your motherboard has extra fan power connectors, we’re going to use the old PSU’s disk drive power cable to connect the fan to the motherboard, as shown in the next paragraph. If your motherboard doesn’t have any of those connectors, you’ll have to attach it directly to your computer’s PSU. For that, I’d use the male end of a power supply Y-splitter.

If you’re going to connect the fan to your motherboard for power, here’s a quick ‘n easy way to make a connector. Cut one of the floppy drive power leads off the old PSU and solder it to the fan, as shown in the picture below. Don’t forget to file off the little nibble, or it won’t connect snugly to your board.

Because in this case I attached the fan to a removable side panel, I soldered some extra pieces of wire from the old PSU between the fan and the connector. Don’t forget to isolate the solder connections! You can now connect it to the motherboard as shown below. Note that because the fan doesn’t have a sense wire, you can’t get a RPM readout from it. 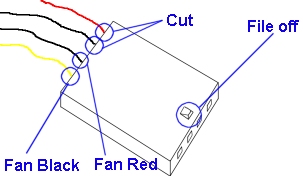 How to make a connector to get the fan’s power from the motherboard. 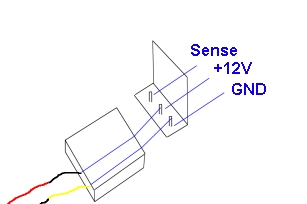 And how to connect that to the motherboard.

Now that the fan’s ready, you can test it by plugging it into your motherboard / PSU and starting your computer. Be careful when connecting it to the motherboard and touch your computer’s case first to protect all the expensive stuff inside from electro magnetic discharges.

A fan just blowing air in a random direction won’t do any good, so we’ll have to attach the fan to the case or side panel. Being the smart folks that we are, we’ll use the rear of the old PSU as a nice air grid / fan connection point.

So screw everything out of the old PSU (You have let it discharge, haven’t you? Just don’t touch anything besides the screwdriver and screws just to be sure). Now use a metal saw to cut off the rear, where the fan you just took out was attached.

As for attaching that piece of metal you’ve just sawed off to your case, here’s the deal: You’ll want to saw from the side you want to look best, so draw the lines there. Draw a square the size of the air grid. Make sure it’s big enough for the screws that’ll hold the fan to go in, but don’t make it too big or there won’t be any room for the bolts that’ll hold the metal plate against the case.

To clear things up, here’s some pictures: 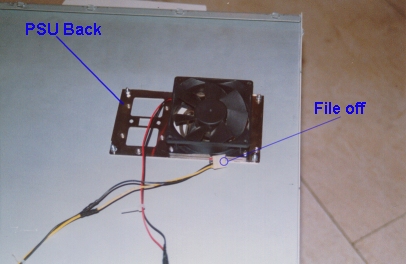 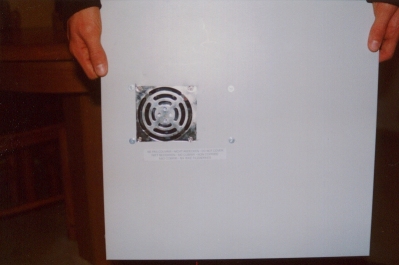 Look at that hole. I should have practised using the electrical jigsaw first…

As you can see, the screws holding the fan fit in the hole in the case, but there’s still room for the bolts that attach the PSU’s back to the case (the left bolts on the right hand picture). The part you have to file off the connector is marked again.

So mark the hole you’re going to cut, the holes you’re going to drill and go to work. But take it slowly, because it isn’t easy to operate an electrical jigsaw, as you can see from the pictures. Furthermore, I’d recommend you punch little "centering dents" for your drill, because it really likes to slip around on the metal of the case. That’s why I used those washers, to mask all the scraped off paint!

Now put it all together, and you have a nice fan blowing hot air out of your case. But what’s that worth if there isn’t anything to blow out? On to the front fan…

Basically the same story as the rear fan, but probably much easier to attach.

As you can see on the photo, the metal front of most cases already has holes in it, so all that’s left to do is to take off the plastic front cover and cut a hole in that, which is easily done with a normal jigsaw (just drill a hole to put it through). I used silicone kit to glue a piece of "fly screen stuff" to the cover, to stop large amounts of dust being sucked in. Just vacuum it off once in a while.

To attach the fan to the front of the case, I used normal tight wraps. Note the spacers I made by putting bolts through the holes in the fan. These spacers need to be there because I’m using the fan "backwards" (so it sucks air in) and there isn’t any protection to stop the fan blades from scraping the case on that side. 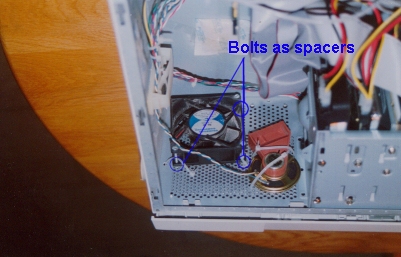 The front fan seen from the inside of the case (obvious). 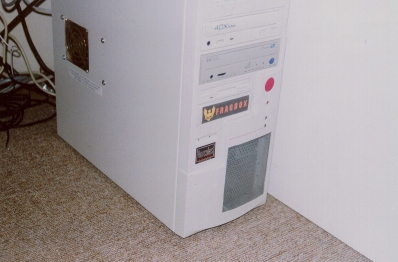 The hole I cut in the plastic front.

That was easy, now wasn’t it?

I hope this guide was useful, and helped you make yourself a super low-budget (ie, free) case cooling solution. So don’t throw away that old machine, it might still come in handy.

Need some personal help? Feel free to email me.

Fitting a watercooler into a shoebox – Joe