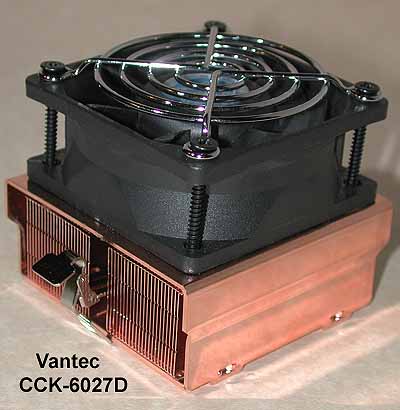 Vantec was kind enough to send samples of their latest heatsink, CCK-6027D. This features a copper base with copper fins soldered to it, with a copper plated aluminum shroud holding the fan.

The base is copper while the shroud is copper plated aluminum; I noticed that some of the copper coating was peeling.

This unit has 44 densely packed fins; I am guessing that Vantec, in its quest to lower noise, traded off more fin area for acceptable performance with a lower noise fan. This is about 168 in² surface area, or 1.16 ft².

I did notice that one side of the heatsink’s fins were not entirely contacting the base:

I don’t think this detracts significantly from performance, as it was only about 1 mm deep; I pointed this out to Vantec for correction. 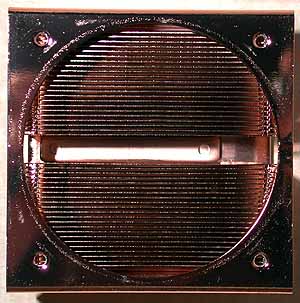 Peering down into the heatsink, the density is very apparent. Part of the reason for this is the center channel; if a different clip was used that eliminated the center groove, perhaps as many as 7 additional fins could have been added, yielding even better performance. 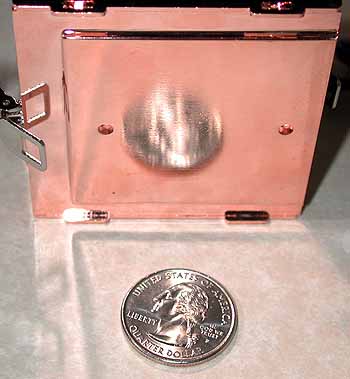 The base I received is flat and buffed – don’t count on seeing this finish.

I prepared the Vantec by boring a hole completely through the base so I could epoxy a thermocouple above the CPU. The thermocouple is attached to an Omega HH23 Digital Thermometer. Ambient temps were measured with a thermocouple placed about 1 inch from the fan’s intake. I used Prime 95 to stress the CPU on an Iwill KK266, BD133 (MBM temps are on-die) and Abit KT7. Arctic Silver grease was used in all tests. CPU Case Temp is the temp at that point where the CPU contacts the heatsink, CPU Back Temps are measured by a thermocouple on the center back of the CPU.

In addition to motherboard tests, I also tested using a static test block. This block typically gives higher C/Ws than board tests and should be considered a “pure” C/W – i.e., free from secondary heatpath effects found on motherboards.

I measured fan noise with a Radio Shack Sound Meter placed 8″ from the fan’s intake; it measured 65 dBA. This compares to about 62 dBA for a YS Tech 27 cfm fan and about 70 for the Delta 38.

The static block test just about splits the difference between the T-Bird and Duron/PIII results at 0.35. Vantec publishes a C/W of 0.32, and our test results average a little higher. For heatsink planning, I would use the 0.35 figure (remember: this means that a 100 watt CPU will show a 35C rise over ambient temps).

The Vantec CCK-6027D at an average C/W of 0.35 is over what we consider acceptable for Socket A CPUs – 0.30. A Delta 38 can get you into better territory but at higher noise. However, if noise is a concern and you’re not aggressively pushing the CPU, the Vantec is an option worth considering.

An excellent balance between noise and performance – Joe

SUMMARY: Swiftech’s MCW372-B, featuring one of the easiest mounting systems around, proves to be a capable performer. Measurements: 2″ x 2 ½” x 2 ½” high Swiftech has a new look for its Socket A/370 waterblock – it now sports