SUMMARY: Fan for each end of the cooling spectrum.

The good guys at Vantec were nice enough to send samples of their fan products which represent the “extreme” ends of the fan spectrum.

Vantec’s Stealth Fans are for noise sensitive applications. Since there is no such thing as a free lunch, these fans (60, 80 and 92mm units) trade off airflow for low noise. As such, they are good units to in non-aggressive applications where noise is a big concern. 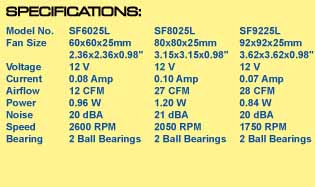 A bit more interesting are the new “Tornado” series. These two fans represent the other side of the spectrum – for very aggressive applications. 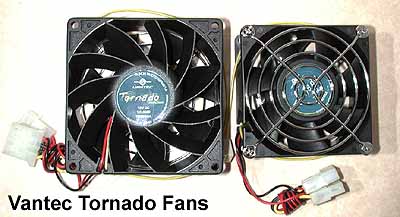 fixed vanes in the base – which serve to “straighten out” airflow so that the air stream comes off the fan more at a 90 degree angle; airflow from non-stator fans radiates out further from the fan base. Stator fans are more efficient at directing air into a heatsink.

A look at the key specs

indicates just how aggressive these fans are – lots of airflow, lots of noise. Both fans use a four pin plug for power and a three pin plug for tach readings using the motherboard’s fan header. Each fan has a finger guard for good reason – extreme fans will do a number on your fingers – I can guarantee it from experience!

I could see using these for extreme CPU cooling, although I would use a rheostat with them to dial the noise down when not doing anything particularly stressful. I plan to use them for some heatsink testing, so stay tuned.

These fans are available from the Heatsink Factory.

Mac users and hardcore (well, at least firm) overclockers will now have something in common. Watercooling. The next generation of top-end G5 Powermacs will come with a water-cooling system standard. No, Apple doesn’t say “water” specifically, but it looks like

I don’t know how useful or useless this is going to be, but hopefully it will be at least a start to something useful. I have three questions, answer whatever applies: Question 1: Have you ever gamed against someone and

There’s a bunch of reviews of the ATI Radeon 9600XT out there. The numbers say it still isn’t in the same class as the 9700 or better (despite rumors to the contrary), and sometimes, even the reviewers say the same