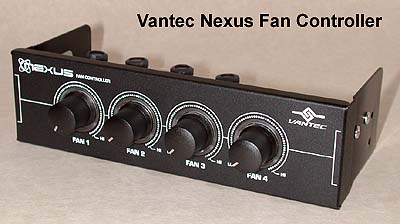 The good guys at Vantec were nice enough to send over samples of the Vantec Nexus Fan Controller. This controller has four channels that each can support up to 18 watts, according to Vantec. There are two models, one black and one silver: 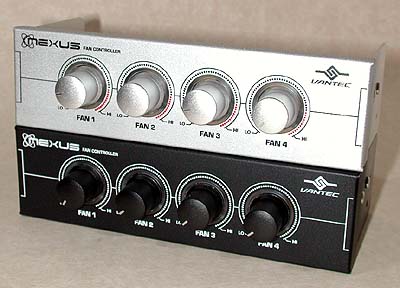 The controller ships with: 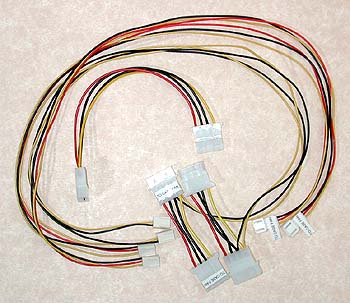 Note that there is no provision to allow fan speed monitoring.

When the unit is powered, there are five blue LEDs that illuminate the panel:

Taking a look inside 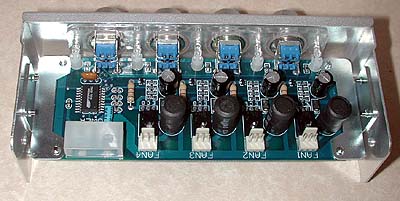 shows the four channels, each with a power regulator. This appears to be a Pulse Width Modulation (PWM) circuit (note IC on left side) – this is not a rheostat circuit (for a detailed explanation, go HERE.) A PWM varies fan speeds by sending “bursts” of voltage to the fan; a resistor/rheostat circuit draws all 12 volts and varies voltage by dissipating energy through the resistor/rheostat as heat.

The advantage of a PWM circuit is it radiates little heat, especially compared to a resistor/rheostat based circuit – more efficient. A closer look at one channel 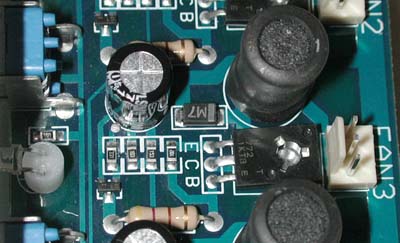 shows the power circuitry for each channel – the blue LED is on the left.

I tested the Vantec Nexus Fan Controller with a Delta 60mm fan #FFB0612SHE, which draws 10 watts. I found I could vary rpms from about 3200 at the Low setting to 7000 at High – a nice range (each channel will vary slightly). Note that some fans may not spin up at the lowest setting – depends on the fan.

I also found that this controller puts out 12 volts, even with less than 12 volts coming in from the power supply; in this case, I measured the power at the four pin power plug at 11.6 volts with output at High from each channel at 12 volts.

Attractive, does the job, energy efficient – all told, a nice fan controller! It should be available mid-December, with an MSRP (Manufacturer Suggested Retail Price) of $29.