When Joe Citarella originally reviewed this item back on
Febuary 3rd, 2004,
I thought it looked like a decent product. I didn’t have a reason to run out an get one, but the knowledge of it’s existance got filed away in the defragmented mess of a hard drive I call a brain.

Flash forward a few months. The funds finally became available to me to allow me to upgrade my graphics card again. I had been using the same card for almost two years, and it was getting well
behind the “bleeding edge”.

Knowing my trusty old Ti4200 was getting long in the tooth, and replacing it was on the top of my list for when the money freed up, I started researching brands and models. By the time the day arrived
that I could place an order, I had narrowed it down to three cards. Out of them, I went with Sapphire’s Radeon 9800 Pro, with 256MB of DDRII onboard.

I went with this for a number of reasons, among them being to review the card for the front page here, and at least one cooling article in conjunction with it (this being the first).

The was also the possibility of another, that being a “How To” on flashing the card’s BIOS, bringing it from the Pro class up to the XT model.

I went for the Sapphire, as my research found it had the highest likelihood of having an R360 graphics core (the XT model), and used the exact same PCB as the XT. Flashing the BIOS on this card,
while netting a performance increase due to a higher default clock and memory speed setting, also held the possibility of enabling a pair of options hidden latent in the R360 core on the Pro model; Overdrive, and the
Temperature Monitor, functional on the XT models only.

After I finished benchmarking the card at default for the planned future review, I flashed the BIOS on it to the XT version. It went flawlessly, and I now for all intents and purposes, have a 9800 XT.
Overdrive, and the Temperature Monitoring capabilities kicked right on after flashing.

So, the article you’re reading now to an extent, hinged on this working as hoped. It did, and here this little modding project can get written.

As designed and assembled by Vantec, this item is intended to mount into an open PCI expansion slot, and blow air upward. Usually, the space underneath the graphics card is somewhat of a dead area
in terms of air movement, and this is designed to circulate air in this part of the case. 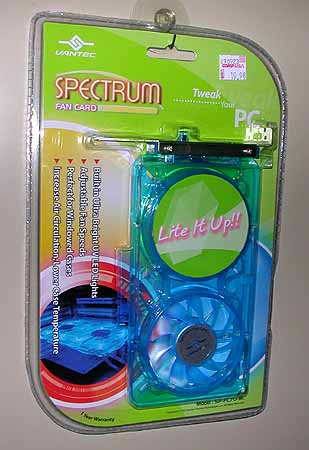 Built into the card, are a pair of 70 x 15mm fans, that flow 17.73 to 29.54 CFM depending on where the sliding HI-LO speed switch is set to. This switch is infinitely variable, and changes the fan speed by limiting the
voltage through to them from HI (12 volts) down to LO (7 volts) The fans make a bit of noise on the highest setting, but not an intolerable amount. On low, they’re fairly quiet.

In researching these cards, I soon discovered a major source of issue with them is heat. Particularly the XT versions, with the higher clock settings.

And while there’s a number of GPU cooling solutions available, I thought of trying to cool the backside of the card as well. I had looked at this manner of card cooling
many moons ago, but there’s no way to perform the same
fan mounting trick I did then on the Sapphire 9800 Pro.

This, coupled with Christopher Aussant’s
recent article concerning graphics cards and heat,
was why I had backside graphics card cooling on my mind when I came across the Vantec fan card hanging on an end cap at CompUSA the other day.

My thoughts as I looked at the Vantec fan card were “Can this be modded to blow downward, instead of upwards?”

The metal bracket used to physically secure the card in place looked to be mounted centered on the card, as did the fan switch itself. Could it be as easy as taking the bracket off and flipping it over?

When I highlighted the first item above, this is what I’m referring to. You need an open slot above the card in order to mount the Vantec after modding it.

If your motherboard has the AGP slot located in the highest possible position (ala the Abit NF7-S, AN7, etc..), this won’t work. 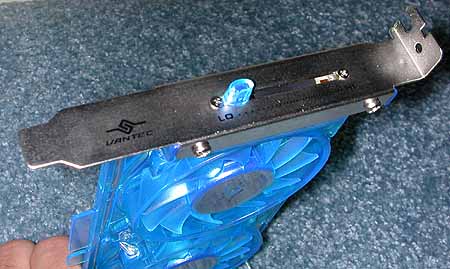 Start out by removing the small plastic button from the switch. It just pulls straight off. Visible in the picture above, are the four screws you need to remove to
get the bracket off.

Remove the two tiny screws at each end of the sliding switch first. Take care not to drop them, as they’re a bugger to find if you do (I did…).

Next, make note of which way the bracket faces, and remove the two larger screws. The bracket is now free to come off the fan card. The switch is somewhat held in place
by a plastic cap over it. If it pops off, it just pops back on; line up the two tabs with the holes in the card. 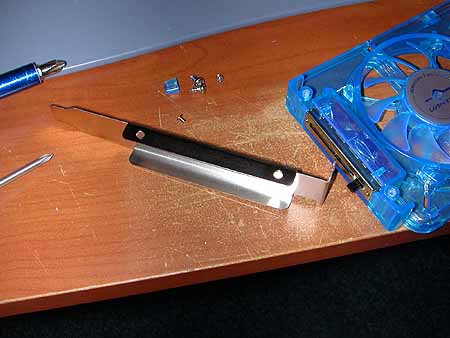 The holes where the two larger screws came out of almost go all the way through the card. We need to drill the last little bit out, so the screws can be put in from the other side.
The drill sizes I mentioned above are what you want to use. Any smaller, and you’ll have a hard time getting the screws back in, and larger will not leave enough for them to bite
into when putting them back in.

Chuck the drill bit in the drill, and go in from the side you took the screws out of. Push the drill bit in until it hits plastic, and drill through. Done carefully, with the
right sized bit, you won’t damage the original threads in the plastic cut by the screws, making this reversible if you ever want to return it to original.

Now, reinstall the bracket facing the opposite direction than it was originally. Where the switch is perfectly centered on the card, all four screws will line up perfectly.
Put the two switch screws in first, but don’t full tighten them until you get the two larger screws started as well. Finish up by tightening the switch screws, then the larger screws,
and put the know back on the switch.

Once reversed, LO is now HI, and vice-versa. Big deal. I can live with it. If you wanted to get really cute with this, simply rotate the switch 180 degrees. The wires look to be long enough
to do it. 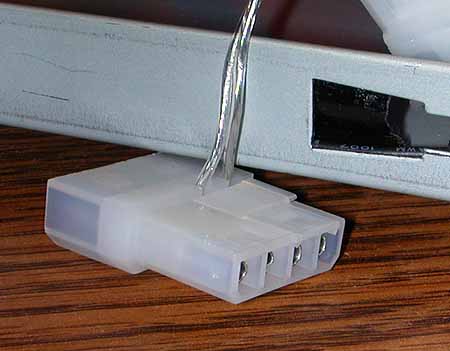 The one piece pass-through Molex connector is on a 10 inch (25.4 cm) lead. Finding a place to plug it in should be very easy. 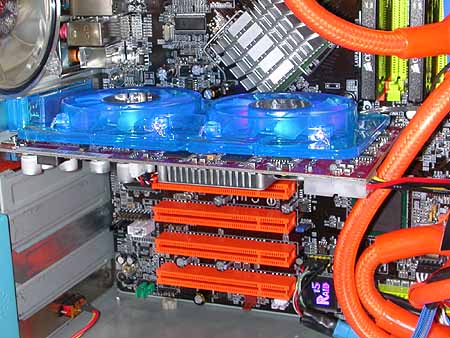 As you install the Vantec fan card above your graphics card, take care not to let the bracket or screws on the Vantec drag across the graphics card. Putting a piece
of electrical tape over the screws is a good safety measure. The screws are close, but do not touch my 9800 Pro.

Close, but clear. No touchie, no shortie, no worry. =)

Along one edge (the edge now facing out), are a pair of plastic tabs, that originally were supposed to sit in a PCI slot. As you tighten the screw down, lift up on
the tab slightly, so the card doesn’t twist down and touch while tightening the screw.

All of the wires on the Vantec are insulated, so they won’t short out anything if they do happen to be touching the graphics card.

As you can see above, the Vantec is just a little bit smaller physically than the 9800 Pro. The whole card should get a nice breeze pushed over it.

Now that I’ve flashed the BIOS on my Sapphire, and the temperatures can be monitored, I’m able to take stock of how good this fan card mod works.

Just the highlights…the pertinent stuff for this test.

The temperatures below for the CPU and System were read using Motherboard Monitor 5.

The temperatures for ambient and air intake were taken using a Raytek MT-4 Mini-Temp tester.

I let the system idle for a few minutes so the temperatures could stabilize, and took my readings. I powered down the system, installed the fan card, rebooted, and
let them stabilize again.

All temperatures were taken with everything running at default specs. Nothing was overclocked. Nothing on the motherboard or graphics
card has been modified, with the exception of flashing the 9800 Pro BIOS to the XT one.

Without fan card
With fan card

GPU Temp Before (without) 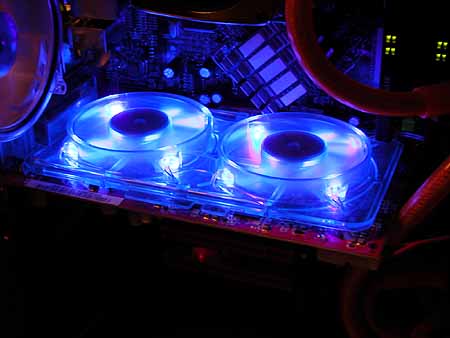 As can be seen in the chart above, adding a cooling source on the backside of the card dropped the measured GPU temperature as much as eight degrees celsius (8C), with the fans on high.

When I am able to replace the Sapphire HSF on the GPU to a better piece, that percentage may or may not change, higher or lower. I’d like to think a better heatsink on the GPU might
make this backside cooling solution work even better still, as the backside temperature might be somewhat less to start with.

Still, these are some pretty good results I think, for a very little effort spent.

I paid $20 for the Vantec at CompUSA. One might think you could find it cheaper elsewhere (usually the case with items at CompUSA). So even the monetary outlay for this was small.

If your having heat issues with your video card, this might just take the edge off enough to help stabilize that overclock you’re trying to push for. It’s something to consider, at the least.

Where Does The G5 Really Stand? So far there’s been much screaming and little substance. Here’s my best estimate of the situation. Is The G5 Really Faster? We’ve explained twice, here and here why the Apple spec-tacle is a good

I Love The Dead

More than a few are getting wound up about this Fortune article. In it, the IBM executive in charge of servers says he believes that in five years, there will be only two players in the high-end microprocessor business: IBM

I knew this day was coming. From the New Yorker: “In 2004, in a Los Angeles paper, Eugene Pidgeon, an actor and writer turned labor activist for dwarf performers, published a manifesto entitled “Little People’s Progress.” In it, he addressed